The Growing Gap in Life Expectancy by Income: Implications for Federal Programs and Policy Responses (2015)

Get This Book
Visit NAP.edu/10766 to get more information about this book, to buy it in print, or to download it as a free PDF.
« Previous: 5 Policy Responses to an Aging Population
Page 141 Share Cite
Suggested Citation:"6 Conclusions." National Academies of Sciences, Engineering, and Medicine. 2015. The Growing Gap in Life Expectancy by Income: Implications for Federal Programs and Policy Responses. Washington, DC: The National Academies Press. doi: 10.17226/19015.
×

This report presents new estimates and projections of the widening spread in life expectancy by income group. It also provides the first comprehensive estimates and projections of how lifetime net benefits (defined as the present value of benefits after age 50 minus the present value of taxes after age 50) under the major U.S. entitlement programs—Medicare, Medicaid, Social Security (including Old-Age, Disability, and Survivors Benefits), and Supplemental Security Income—are likely to be affected by the changing distribution of life expectancy by lifetime earnings. More specifically, the report suggests that from the cohort born in 1930 (who are mostly in retirement today) to those born in 1960 (who are mostly still in the midst of their working years), life expectancy rises markedly for higher earners but increases much less, or even declines, for lower earners. As a result, inequality in longevity is rising substantially, in tandem with rising inequality in income. For example, male workers born in 1930 who were in the top fifth of lifetime earnings were expected, at age 50, to live 5 years longer than those in the bottom fifth of lifetime earnings. For the 1960 cohort, the committee projects that the gap between top and bottom quntiles will widen to 12.7 years. The projected changes are even more substantial for females.

The report investigates how the progressivity of net benefits changes under the health and mortality conditions by socioeconomic class (as measured by lifetime earnings) of the 1930 birth cohort compared to those of the 1960 birth cohort, for which lifetime earnings gradients by earnings quintile are much steeper. For the mortality regime of the 1930 cohort, our estimates suggest that the major entitlement programs will deliver net

lifetime benefits that are larger for those in the lower earnings categories than those in higher earnings categories. For the mortality regime of the 1960 cohort, however, net lifetime benefits are projected to be roughly flat across the earnings distribution for males; for females the differences between lower and higher earners become less pronounced than in the 1930 cohort. In these projections, the ratio of net benefits in the highest quintile to those in the bottom quintile, for example, rises from 0.6 to 1.0 for males and from 0.5 to 0.8 for females. The reason is that life expectancy is rising rapidly at the top end of the earnings distribution, so those earners receive their benefits over a longer number of years relative to lower earners, whereas the change has little effect on taxes paid.

Because of the steepening gradient, the present value of net benefits for males in the highest earnings quintile is projected to rise by $125,000 relative to the lowest quintile; for females this rise is $150,000. The changing mortality pattern has also reduced the progressivity, measured by the present value of expected lifetime benefits relative to inclusive wealth, of the federal entitlement programs. That ratio rises by 7 percentage points for males in the top quintile and by 5 percentage points for females, relative to a slight decline for males in the bottom quintile and a 4 percentage point decline for females in the bottom quintile. There is, to be sure, considerable uncertainty in the amount of widening of the distribution of mortality by income projected by the committee. To gauge the sensitivity of the model and assumptions used, we also considered the case in which only half as much widening takes place, and we found that the effects on the gap in benefits would then be only half as great. Box 6-1 contains a further discussion of potential sources of errors in the report’s analyses.

The committee’s analysis also explores possible policy responses to these growing gaps in expected lifetime benefits. Seven such responses were compared with the baseline scenario, as a means of illustrating the likely impact of changes in life expectancy by income quintile. These potential reforms were selected from a long list of possible changes that have emerged from policy discussions during past years. Analyses of the seven reforms, using the same model approach as the baseline scenario, were produced for illustrative purposes and should not be seen as indicative of committee preferences or recommendations.

BOX 6-1
Potential Sources of Projection Error in this Report

unforeseen changes in trend. Some kinds of error could seriously distort the results of the experiment while others would have smaller effects. If the projected downward trend in mortality were generally too rapid across all quintiles and both sexes, then future gains in longevity would be overestimated. This kind of error in trend would cause an exaggeration of the increase in NPVs between the mortality regimes of the 1930 and projected 1960 birth cohorts, and it would cause a smaller exaggeration of the inter-quintile range of NPVs within each of the mortality regimes. In its interpretation of results, the committee often focuses on the change between mortality regimes in these inter-quintile differences (which are not much affected by overall trend), rather than on change in quintile-specific NPV between regimes (which would be affected strongly by overall trend), so errors in the trend projections will not have a strong effect on this category of results and interpretations.

A reported in Chapter 3, the committee’s long-term projections of life expectancy averaged across sex and income quintile are quite similar to those of the Social Security Actuary. However, when disaggregated by sex they show an eventual crossover of male and female life expectancy. Although projected differences in NPV by sex must be interpreted with caution for this reason, it is also true that an error in sex-specific trend projection should not have a large effect on the sex-specific change in inter-quintile NPV range, because the error would affect both top quintile and bottom quintile mortality in the same way, and so it would not have a large effect on the difference in survival and NPV. Additional issues with the estimated mortality models for females are discussed in Chapter 3.

The committee’s results suggest larger effects on progressivity from two possible policy changes: one that increases the Social Security normal retirement age (NRA) and another that substantially reduces benefits, relative to baseline, for higher earners but not for lower earners. A simulated increase in the NRA to age 70 reduces benefits across the board under

Another policy change the committee simulated reduces benefits only to workers in the top half of the lifetime earnings distribution; the details are in Chapter 5 (policy simulation 6). This change offsets much of the increase in benefits resulting from rising inequality in life expectancy. In other words, under the conditions and assumptions of the simulation, making the annual benefit more progressive could largely, if not entirely, offset the effect on lifetime benefits from differential changes in life expectancy by earnings quintile.

In summary, the committee’s analyses suggest a substantial increase in inequality in life expectancy, a large effect of that increase on the distribution of lifetime benefits from the major U.S. entitlement programs, and a number of policy reforms that could, if desired, offset those changes.

Next: References »
The Growing Gap in Life Expectancy by Income: Implications for Federal Programs and Policy Responses Get This Book
× 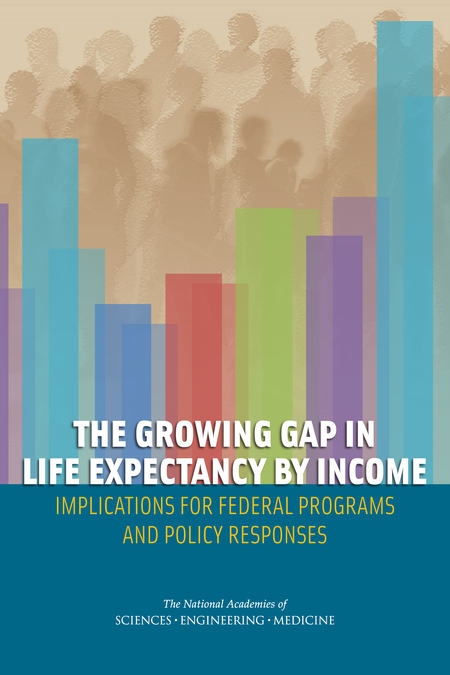 The U.S. population is aging. Social Security projections suggest that between 2013 and 2050, the population aged 65 and over will almost double, from 45 million to 86 million. One key driver of population aging is ongoing increases in life expectancy. Average U.S. life expectancy was 67 years for males and 73 years for females five decades ago; the averages are now 76 and 81, respectively. It has long been the case that better-educated, higher-income people enjoy longer life expectancies than less-educated, lower-income people. The causes include early life conditions, behavioral factors (such as nutrition, exercise, and smoking behaviors), stress, and access to health care services, all of which can vary across education and income.

Our major entitlement programs – Medicare, Medicaid, Social Security, and Supplemental Security Income – have come to deliver disproportionately larger lifetime benefits to higher-income people because, on average, they are increasingly collecting those benefits over more years than others. This report studies the impact the growing gap in life expectancy has on the present value of lifetime benefits that people with higher or lower earnings will receive from major entitlement programs. The analysis presented in The Growing Gap in Life Expectancy by Income goes beyond an examination of the existing literature by providing the first comprehensive estimates of how lifetime benefits are affected by the changing distribution of life expectancy. The report also explores, from a lifetime benefit perspective, how the growing gap in longevity affects traditional policy analyses of reforms to the nation’s leading entitlement programs. This in-depth analysis of the economic impacts of the longevity gap will inform debate and assist decision makers, economists, and researchers.