Visit NAP.edu/10766 to get more information about this book, to buy it in print, or to download it as a free PDF.
Page i Share Cite
Suggested Citation:"Front Matter." National Research Council. 1984. Amaranth: Modern Prospects for an Ancient Crop. Washington, DC: The National Academies Press. doi: 10.17226/19381.
×

Preface Amaranth, a little-known crop of the Americas, is grown either as a grain crop or as a leafy vegetable. Despite its obscurity, it offers important promise for feeding the world's hungry. In the National Academy of Sciences' 1975 study Underexploited Tropical Plants with Promising Economic Value, amaranth was selected from among 36 of the world's most promising crops. Since then, extensive research has been done on the plant, and this book provides a more detailed examination of its characteristics and prospects. The panel that produced this report met in September 1981 at the Rodale Research Center of Rodale Press in Emmaus, Pennsylvania. There, panel members examined a field of grain amaranth ready for harvest as well as test plots of several hundred amaranth varieties. They also sampled many amaranth products from the Rodale Test Kitchen. The panel members are indebted to Robert Rodale and his staff for their assistance and hospitality. This report, resulting from the panel's deliberations, is intended for agencies engaged in development assistance and food relief, officials and institutions concerned with agriculture in developing countries, and scientific communities with relevant interests. This study is one of a series that explores promising plant resources that heretofore have been unknown, neglected, or overlooked. Other titles include: â¢ Underexploited Tropical Plants with Promising Economic Value (1975) â¢ Making Aquatic Weeds Useful: Some Perspectives for Developing Countries (1976) â¢ Tropical Legumes: Resources for the Future (1979) â¢ The Winged Bean: A High-Protein Crop for the Tropics (second edition, 1981) This series of reports is issued under the auspices of the Advisory Committee on Technology Innovation (ACTI) of the Board on Science and Technology for International Development (BOSTID), National Research Council. ACTI was established in 1971 especially to assess

Vl AMARANTH scientific and technological advances that might prove particularly applicable to problems of developing countries. Funds for this study were provided by the William H. Donner Foundation, which also made possible the free distribution of the report. Staff support was provided by the Office of the Science Advisor, Development Support Bureau, Agency for International Development. How to cite this report: National Research Council. 1984. Amaranth: Modern Prospects for an Ancient Crop. National Academy Press, Washington, D.C.

Next: Introduction »
Amaranth: Modern Prospects for an Ancient Crop Get This Book
× 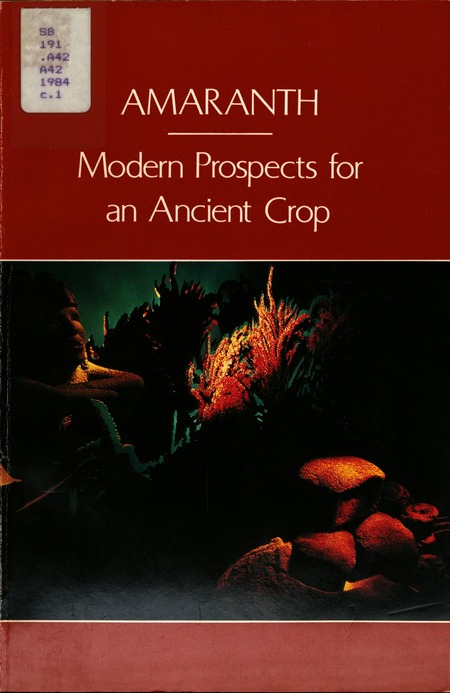