Making Value for America: Embracing the Future of Manufacturing, Technology, and Work (2015)

Get This Book
Visit NAP.edu/10766 to get more information about this book, to buy it in print, or to download it as a free PDF.
« Previous: Prologue
Page 14 Share Cite
Suggested Citation:"Introduction." National Academy of Engineering. 2015. Making Value for America: Embracing the Future of Manufacturing, Technology, and Work. Washington, DC: The National Academies Press. doi: 10.17226/19483.
×

American business and government leaders have drawn considerable attention to the need to strengthen US manufacturing to support innovation and job creation, especially as employment in manufacturing has declined steadily for more than a decade. But framing the debate on manufacturing in terms of whether it is done in the United States or overseas, or how to repatriate repetitive production jobs, misses the big picture. The issue is one of making value as opposed to making things. The way products and services are conceived, designed, made, and distributed is changing, and the way the middle class is supported will likely change as well. Actions aimed at strengthening American innovation and job creation need to account for these changes and focus on maximizing value along manufacturing value chains.

Manufacturers depend on complex networks of activities that are necessary to deliver their products to market and ensure their utility throughout the product lifecycle. These activities span multiple locations, companies, and economic sectors. They include services and software production to meet and exceed increasingly sophisticated customer needs and desires. And as competition grows, so does the role of these offerings in creating value.

The value chain, or value network, refers to the system of activities that businesses and workers perform to create a product, deliver it to market, and support it until the end of its life (Porter 1998). These activities include research and development (R&D), design, production, supply chain management, distribution, marketing, and services. Many manufacturing value chains involve a complex network of businesses that create intermediate outputs such as raw materials, components, assembled products, services, and software, with information and iterations flowing back and forth across businesses and stages of the value chain. The value chain for Apple’s iPad, for example, involves material and component suppliers (e.g., Corning, Alcoa, Samsung), original design

manufacturers (e.g., Foxconn), network providers (AT&T, Verizon), and a wide variety of content creators including large corporations such as TimeWarner as well as individual users (Figure I-1).

Manufacturing value chains traverse the classic divisions of the economy into raw materials production, fabrication of goods, and provision of services and information. Several of these functions may be performed within a single company or even a single establishment. Ford Motor Company, for example, carries out its own R&D, engineering and testing services, and repair and maintenance in addition to manufacturing (Table I-1).

While companies have always been involved in activities that cross economic sectors, it is increasingly difficult to meaningfully categorize companies along manufacturing value chains as providing mainly goods or services. Many companies that traditionally focused on producing and selling goods have developed service-type business models. For example, Rolls-Royce offers a “power by the hour” service that lets customers rent the use of a jet engine rather than purchasing one. Rolls-Royce retains ownership of the engines, monitors their real-time performance, and manages their maintenance and replacement. Such service content has grown in importance among manufacturers. Deloitte Research (2006) found that the fraction of manufacturers’ revenues generated by services has grown to approximately 20 percent in the medical device, industrial product, and telecommunication equipment industries and as high as 37 percent in automotive and 47 percent in aerospace. Service content is even more pronounced among many of the world’s largest manufacturers, whose main offering is defined by after-sale services.

At the same time, companies primarily known for software and online services have branched into designing and producing manufactured goods. Amazon, for example, established a hardware team that developed the Kindle e-reader and Fire TV digital media player, and is developing a smartphone to more effectively deliver its offerings to customers. Google is partnering with contract manufacturers to produce wearable technology products such as Google Glass.

The interconnected activities along these value chains constitute a large portion of the US economy. Value chains that rely on manufactured goods as either a part of or a necessary means to deliver their main offering (as in the case of software) account for 25 percent of employment, over 40 percent of gross domestic product, and almost 80 percent of R&D spending in the United States.1

1 Data from the National Science Foundation, “Worldwide R&D paid for by the company and performed by the company and others”; and the Bureau of Economic Analysis, “GDP by industry” and “Full-time equivalent employees by industry” (available at www.bea.gov; accessed July 28, 2014). Data include goods manufacturing, transportation, warehousing, wholesale and retail trade, computer systems design, Internet and print publishing, broadcasting and telecommunications, and scientific and technical services.

FIGURE I-1 Companies involved in the iPad value chain (not comprehensive).

THE COMMITTEE’S APPROACH TO ITS CHARGE

The committee was charged with examining the concept of making value for the United States by identifying best practices along the holistic manufacturing value chain—from product development and design to after-sale services, including educational approaches to prepare the workforce and public and private actions to create an effective environment for value creation. Recognizing the complexity of modern manufacturing value chains and the interconnection of the production of goods, services, and software, the committee took a broad approach. The members examined a variety of value chains associated with manufacturing, including those of high-tech services and software that depend on manufactured devices to operate. They also considered activities—such as R&D, professional and financial services, and retail trade—that are needed to bring a product to market and use it throughout its lifetime.

To explore the value chains linked to the manufacturing sector, which comprises the activities and employment of factories, committee members sought and reviewed a variety of data, including economic statistics on output, employment, patents, and other indicators of activities along the value chain. However, by design, the committee was charged with investigating activities that do not easily correspond to the standard organization of economic statistics. When data were available for activities specific to value chains that encompass manufacturing, they were included. In many cases, though, it was either not possible or impractical to gather data on certain services, such as financial or business services, that are specific to manufacturing-related value chains separate from other parts of the economy; in these cases, the committee examined economywide data.

The committee members also gathered extensive information from expert interviews and published research. During their year-long investigations, they sought input from nearly 100 individuals, including directors of manufacturing operations, research managers, entrepreneurs in the United States and abroad, and current and former policymakers at the local and federal levels. They also reviewed literature and interviewed researchers recognized as authorities in productivity, management practices, team dynamics for innovation, and the labor market.

This report presents the committee’s findings and recommendations. Chapter 1 discusses three important factors transforming value chains linked to the manufacturing sector: globalization, advances in computing power and robotics, and improved business processes. These driving factors are changing the nature of work and the types of skills that are demanded on the factory floor, in front-end and sales offices, and in many other areas. Chapter 2 explores opportunities to improve operations and create new product and service offerings by taking

advantage of emerging digital technologies and distributed tools. The country’s capacity to pursue these opportunities and adapt to transforming value chains will be enhanced by improvements in five areas: widespread adoption of best practices, a well-prepared and innovative workforce, local innovation networks to support startups and new products, capital investment flows, and infrastructure, all of which are described in Chapter 3. Chapter 4 presents the committee’s recommendations of specific actions for businesses and federal, state, and local governments and agencies to address these five areas. The Appendix presents a review of factors and challenges that underscore the importance of creating an environment in the United States that continuously attracts and creates businesses and jobs.

Next: 1 The Manufacturing Value Chain in Transition »
Making Value for America: Embracing the Future of Manufacturing, Technology, and Work Get This Book
× 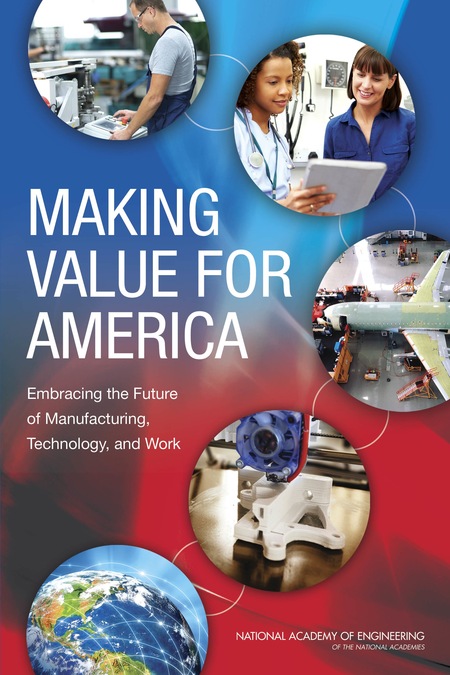 Globalization, developments in technology, and new business models are transforming the way products and services are conceived, designed, made, and distributed in the U.S. and around the world. These forces present challenges - lower wages and fewer jobs for a growing fraction of middle-class workers - as well as opportunities for "makers" and aspiring entrepreneurs to create entirely new types of businesses and jobs. Making Value for America examines these challenges and opportunities and offers recommendations for collaborative actions between government, industry, and education institutions to help ensure that the U.S. thrives amid global economic changes and remains a leading environment for innovation.

Filled with real-life examples, Making Value for America presents a roadmap to enhance the nation's capacity to pursue opportunities and adapt to transforming value chains by widespread adoption of best practices, a well-prepared and innovative workforce, local innovation networks to support startups and new products, improved flow of capital investments, and infrastructure upgrades.