Get This Book
Visit NAP.edu/10766 to get more information about this book, to buy it in print, or to download it as a free PDF.
Page i Share Cite
Suggested Citation:"FRONT MATTER." Institute of Medicine. 1992. Strengthening Research in Academic OB/GYN Departments. Washington, DC: The National Academies Press. doi: 10.17226/1970.
×

Committee on Research Capabilities of Academic Departments of Obstetrics and Gynecology

The Institute of Medicine was chartered in 1970 by the National Academy of Sciences to enlist distinguished members of the appropriate professions in the examination of policy matters pertaining to the health of the public. In this, the Institute acts under both the Academy’s 1863 congressional charter responsibility to be an advisor to the federal government and its own initiative in identifying issues of medical care, research, and education.

The serpent has been a symbol of long life, healing, and knowledge among almost all cultures and religions since the beginning of recorded history. The image adopted as a logotype by the Institute of Medicine is based on a relief carving from ancient Greece, now held at the Staatlichemuseen in Berlin.

Packard Foundation—Center for the Future of Children, Los Altos, California

Department of Obstetrics and Gynecology, University of Chicago, Chicago, Illinois

Department of Obstetrics and Gynecology, University of New Mexico School of Medicine, Albuquerque

The work of this committee could not have been accomplished without the contributions of many people and organizations who provided assistance and information. The staff of the National Institutes of Health were especially generous with their time and expertise. Many individuals contributed, including Duane F. Alexander, Sumner J. Yaffe, Charlotte Catz, Michael E. McClure, Donald McNellis, Darlene D. Levenson, George E. Lewerenz, and many others at the National Institute of Child Health and Human Development who spent considerable time with us. A particular debt is also owed to Jerome G. Green and his staff at the Division of Research Grants who provided data that were crucial to the work of the committee. Our project officers were Pamela Wolf and Jeffrey A. Perlman.

Important help with data was also provided by Paul J. Friedman of the University of California, San Diego, who supplied special analyses of data on physician age distribution, and Warren H. Pearse of the American College of Obstetricians and Gynecologists (ACOG), who kindly allowed us to participate in a survey sponsored by ACOG and the Association of Professors of Gynecology and Obstetrics.

Individuals who participated at meetings of the committee include Florence Haseltine (who provided the inspiration for this study), Daniel R. Mishell, Lawrence D. Longo (who also contributed a background paper), Harold Pincus, and Frederick Naftolin.

We also wish to acknowledge the help of many members of departments of obstetrics and gynecology who welcomed staff and gave generously of their time and experience. Sites visited include the University of California at San Francisco, San Diego, and Irvine; the University of Pennsylvania; and Yale University.

The committee solicited input from chairs of departments of OB/GYN and others members of the profession. Their thoughtful responses gave us perspectives and information that provided important groundwork for our deliberations.

The research agenda, which constitutes Chapter 6, could not have been completed without the contributions of those who wrote background papers. Their names are listed in Appendix C, and our thanks go to each of them.

Finally I would like to thank my fellow committee members whose deliberations provided the basis for this report. On their behalf, I wish to express our gratitude to the Institute of Medicine staff. Jessica Townsend as study director managed all aspects of the study activities and report preparation. Dee Sutton provided secretarial support, and Paul B. Phelps edited the manuscript.

Next: EXECUTIVE SUMMARY »
Strengthening Research in Academic OB/GYN Departments Get This Book
× 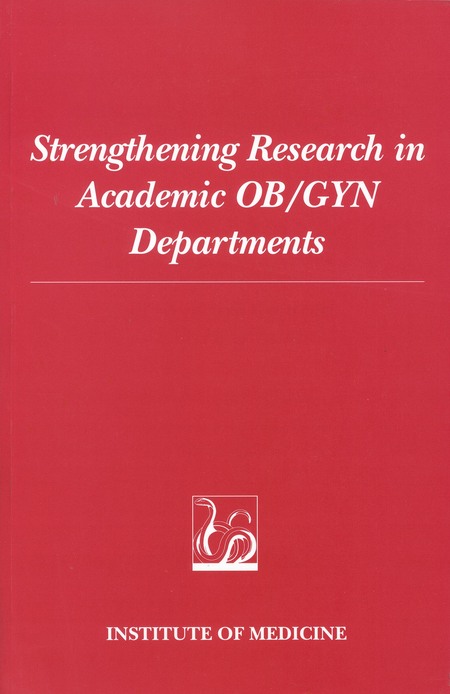 Research conducted in academic departments of obstetrics and gynecology could result in substantial improvements in the health of women and the outcomes of pregnancy.

Strengthening Research in Academic OB/GYN Departments determines whether such departments are capable of fulfilling this promise. The committee finds that these departments have a poor track record in their ability to compete for research funds and in the extent to which their faculty contribute to research. Adding to the problem are factors that deter OB/GYNs from a research career and a dearth of dynamic research leaders in the profession.

The volume explores reasons for this situation and makes recommendations to counteract them. Also included is an agenda of needed research.