Dolphins and the Tuna Industry (1992)

Get This Book
Visit NAP.edu/10766 to get more information about this book, to buy it in print, or to download it as a free PDF.
Page i Share Cite
Suggested Citation:"Front Matter." National Research Council. 1992. Dolphins and the Tuna Industry. Washington, DC: The National Academies Press. doi: 10.17226/1983.
×

DOLPHINS AND THE TUNA INDUSTRY

Support for this project was provided by the U.S. Department of Commerce, NOAA Contract No. 50-DGNF-9-00157.

Dolphins and the tuna industry/Committee on Reducing Porpoise Mortality from Tuna Fishing, Board on Biology, Board on Environmental Studies and Toxicology, Commission on Life Sciences, National Research Council.

Copyright 1992 by the National Academy of Sciences.

RAYMOND A. WASSEL, Program Director for Environmental Sciences and Engineering

The Committee on Porpoise Mortality from Tuna Fishing was formed on October 10, 1989, under the auspices of the Board on Biology (BB) and the Board on Environmental Studies and Toxicology (BEST) of the National Research Council's Commission on Life Sciences. The committee was formally charged as follows:

The task of this committee is to perform a study mandated by the Marine Mammal Protection Act Amendments of 1988, reviewing scientific and technical information relevant to promising new techniques for finding and catching yellowfin tuna without killing porpoises in the Eastern Tropical Pacific Ocean. The committee will review information on the biology and ecology of the yellowfin tuna and porpoises with which they commonly associate, as well as the nature of the “tuna-porpoise bond.” The committee will also identify currently available and promising new techniques for reducing the incidental catch of porpoises in tuna fishing. These techniques include locating tuna without porpoises, breaking the tuna-porpoise bond, and modifying gear or methods to reduce incidental drowning of porpoises in nets. The resulting report will be used by the Secretary of Commerce as a basis for a proposed plan for research, development, and implementation of alternative fishing techniques.

The committee was fortunate to have in its membership experts on both tuna and dolphin biology and ecology, tuna fishing and gear technology (in particular, purse-seine and dolphin-conservation technology), fishery biology, management, sociology, and economics. All of these kinds of expertise were

required to address the complex issues of dolphin mortality from tuna fishing. Indeed, the problem goes far beyond issues of science and technology.

In the early 1970s, the ‘tuna-dolphin problem” was one of the most difficult issues before the newly formed Marine Mammal Commission. Now, two decades later, it still remains a matter of intense concern to politicians, the media, and the public at large. This concern persists not because of its scientific importance, but because its ramifications extend into many aspects of contemporary society. It affects not only those directly involved in the harvesting and marketing of tuna and tuna products, but also the competitive relationship between U.S. and non-U.S. fishermen as well as the international relations between the United States and other countries that harvest tuna and market tuna products. Perhaps even more important, the tuna-dolphin problem raises a complex series of sociological, and inevitably political, issues that include attitudes of and about fishermen, food processors and canners, retailers, animal-rights advocates, disparate groups of environmental activists, the popular press, and other news media.

The committee, however, was charged to identify scientific and technological innovations that show promise in reducing dolphin mortality from tuna fishing. Although the committee decided that the problem must be put into the broad context of policy, history, and economics, it strove to provide an unbiased, neutral evaluation of the scientific and technical issues it faced. Individual members hold personal views on the values of preventing all dolphin mortality from tuna fishing, of preserving the fishermen's way of life, of obtaining valuable protein at the lowest possible cost, and of other related issues, but the committee made every effort to exclude those personal views from its analysis and from this report. The committee's effort was focused on providing, to the best of its ability, the best scientifc and technical evaluation to inform policymakers and the public, even if some of its scientific conclusions are unpalatable to various people.

The committee was assisted greatly by the National Research Council staff, in particular our project directors Dave Johnston and David Policansky, our project assistants Linda Kegley and Shirley Jones, and editor Ruth Crossgrove. Their work was essential in producing a coherent report from the drafts provided by the committee members. We also acknowledge the guidance of BEST liaison Joanna Burger and BB liaison David Wake. We are grateful to nine anonymous reviewers and to George Bartholomew for contributing many helpful comments and suggestions.

I wish to thank two graduate students at Fisheries Research Institute, James Ianelli and Alejandro Anganuzzi, who assisted with my analysis and interpretation of data. Finally, I also wish to thank four outstanding individuals who helped to make my task a doable one. Abby Simpson took care of all matters of logistics and editing at the FRI end. Her keen knowledge of the English language greatly enhanced the quality of the sections of the report drafted by me. Committee members Martin Hall and Harold Medina have consistently acted beyond the call of duty. Martin has patiently provided the committee with more information and a greater critical eye than I would have thought possible. Harold, as the only committee member from the U.S. tuna industry, has consistently provided his unique insight, sometimes in very contentious and uncomfortable situations, in the most distinguished and gentlemanly fashion imaginable. And last but not least, in addition to providing technical and editorial support, Program Director David Policansky has been a spiritual companion throughout the course of this long and difficult journey.

DOLPHINS AND THE TUNA INDUSTRY

Next: Executive Summary »
Dolphins and the Tuna Industry Get This Book
× 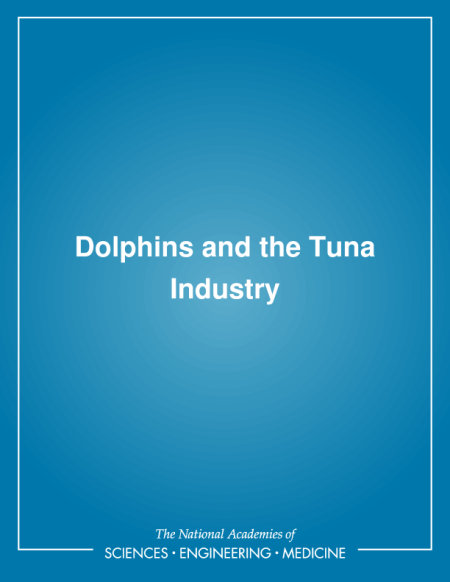 This book presents key conclusions about the controversial killing of thousands of dolphins each year during tuna fishing in the eastern tropical Pacific.

Dolphins drown in nets that are set to catch yellowfin tuna, which tend to swim beneath dolphin herds. After 20 years of intense debate among environmentalists, the tuna industry, and policymakers, this fatal by-product of tuna fishing remains a high-profile public issue.

Dolphins and the Tuna Industry provides a neutral examination of the scientific and technical questions at the core of the problem. Recommendations for solutions are offered in two areas: developing new techniques that promise to reduce dolphin mortality with the existing purse-seine method of tuna fishing, and developing entirely new methods of finding tuna that are not swimming with dolphins.

Dolphins and the Tuna Industry provides a comprehensive, highly readable overview of the dolphin-tuna controversy, useful to experts and newcomers to the issue. It explores the processes of tuna fishing and dolphin mortality, the status of the tuna industry, and the significant progress made in reducing dolphin mortality through modifications in fishing practice.

This book will be indispensible to environmental and animal protection groups, tuna fishing crews and processors, companies that market tuna products, policymakers, regulators, and concerned individuals.