Sustainable Agriculture and the Environment in the Humid Tropics (1993)

Get This Book
Visit NAP.edu/10766 to get more information about this book, to buy it in print, or to download it as a free PDF.
« Previous: Glossary
Page 675 Share Cite
Suggested Citation:"Authors." National Research Council. 1993. Sustainable Agriculture and the Environment in the Humid Tropics. Washington, DC: The National Academies Press. doi: 10.17226/1985.
×

MARY E. CARTER is special assistant to the assistant secretary for science and education, U.S. Department of Agriculture (USDA). She received her Ph.D. degree in natural polymers and products from the University of Edinburg, Scotland. Her industry research was in natural and synthetic polymers and fibers and her USDA experience as associate administrator of the Agricultural Research Service encompassed management of a broad research program from soil and water, plants, and animals to human nutrition.

RODRIGO GÁMEZ is director general of the National Biodiversity Institute (Instituto Nacional de Biodiversidad) of Costa Rica. His research experience includes plant virology with an emphasis in virus identification and characterization and insect transmission of plant viruses. He received his Ph.D. degree in plant pathology from the University of Illinois in 1967.

STEPHEN GLIESSMAN Since 1982 Gliessman has been director of the agroecology program at the University of California at Santa Cruz, where he is also professor of environmental studies. He has a Ph.D. degree in plant ecology from the University of California at Santa Barbara, and has lived and worked extensively in Latin America. His primary areas of research are agroecology, the ecology of traditional agroecosystems, and the analysis of indicators of agricultural sustainability.

ARTURO GÓMEZ-POMPA is director of the University of California Consortium on Mexico and the United States and professor of botany at the University of California, Riverside. He received his D.Sc. degree in biology from the National Autonomous University of Mexico in 1966. He is adviser on tropical ecology to Mexican President Carlos Salinas de Gortari and consultant to the Mexican undersecretary of forestry for development of the Tropical Forest Action Plan for Mexico.

RICHARD HARWOOD (Chair) holds the C.S. Mott Foundation Chair of Sustainable Agriculture at Michigan State University, where he received his Ph.D. degree in plant breeding. His areas of expertise include small farm agricultural systems in the humid tropics and integration methods for agronomic cropping systems.

WALTER A. HILL Since 1987 Hill has been Tuskegee University's dean of the School of Agriculture and Home Economics and director of the George Washington Carver agricultural experiment station. He received his Ph.D. degree in agronomy from the University of Illinois in 1978. His research has focused on plant and environment relationships.

RATTAN LAL In 1981 Lal left the International Institute of Tropical Agriculture, Ibadan, Nigeria, to become a professor at Ohio State University in the Department of Agronomy. In 1968 he received his Ph.D. degree in agronomy (soil physics) from the Ohio State University. His research interests include soil erosion and its control, soil structure and management, soil compaction and drainage, emission of radiatively active gases from soil-related processes, ecological impact of tropical deforestation, viable alternatives to shifting cultivation, and sustainable management of soil and water resources.

GILBERT LEVINE is emeritus professor of agricultural engineering at Cornell University, where he received his Ph.D. degree. He directed the university's Center for Environmental Research and currently is a senior associate of the International Irrigation Management Institute.

of Agriculture, in Puerto Rico. He received his Ph.D. degree in ecology in 1969 from the University of North Carolina at Chapel Hill.

ALISON G. POWER is associate professor in the Section of Ecology and Systematics and in the Department of Science Technology Studies at Cornell University. She received her Ph.D. degree in ecology from the University of Washington. Her research interests include agricultural ecology, integrated pest management, environmental impacts of agricultural technology, and tropical agriculture.

PEDRO A. SANCHEZ is director general of the International Center for Research in Agroforestry, Nairobi, Kenya. During most of the duration of this study, he was professor of soil science and coordinator of the Tropical Soils Program, North Carolina State University. He has a Ph.D. degree in soil science from Cornell University. His primary areas of interest are the mitigation of tropical deforestation, land depletion, and rural poverty through improved agroforestry systems.

E. ADILSON SERRÃO is an agronomist with the Center for Agroforestry Research of the Eastern Amazon (Centro de Pesquisa Agroflorestal da Amazônia Oriental) at the Brazilian Enterprise for Agricultural Research (Empresa Brasileira de Pesquisa Agropecuária), Belém, Brazil. He received his Ph.D. degree in agronomy from the University of Florida in 1976. His major area of research is pasture and animal production in the context of sustainable agricultural development in the humid tropics, with an emphasis on the Brazilian Amazon.

PATRICIA C. WRIGHT is an anthropology professor at the State University of New York at Stony Brook and is director of the Ranomafana National Park Project in Madagascar, where she has coordinated an integrated program of sustained rural development for long-term conservation of a rain forest. She received her Ph.D. degree at the City University of New York. She also devotes her efforts to studying lemurs in their natural habitat and to preserving biodiversity.

Next: Index »
Sustainable Agriculture and the Environment in the Humid Tropics Get This Book
× 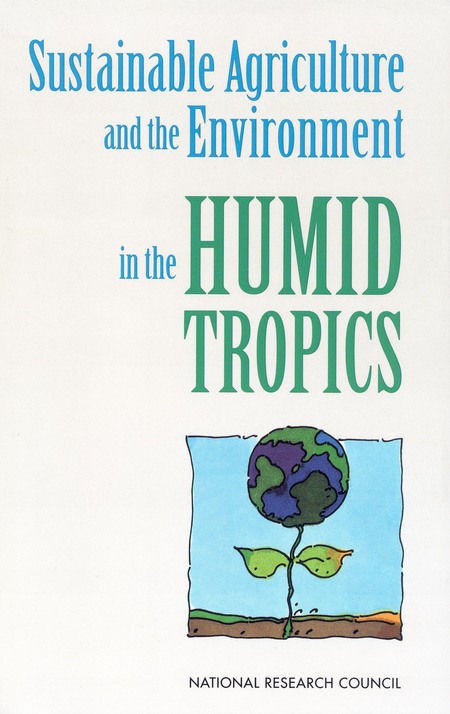 Rainforests are rapidly being cleared in the humid tropics to keep pace with food demands, economic needs, and population growth. Without proper management, these forests and other natural resources will be seriously depleted within the next 50 years.

Sustainable Agriculture and the Environment in the Humid Tropics provides critically needed direction for developing strategies that both mitigate land degradation, deforestation, and biological resource losses and help the economic status of tropical countries through promotion of sustainable agricultural practices. The book includes: