Get This Book
Visit NAP.edu/10766 to get more information about this book, to buy it in print, or to download it as a free PDF.
Page i Share Cite
Suggested Citation:"Front Matter." National Research Council. 1992. Assessing Evaluation Studies: The Case of Bilingual Education Strategies. Washington, DC: The National Academies Press. doi: 10.17226/2014.
×

The Case of Bilingual Education Strategies

This project was supported by funds from the U.S. Department of Education.

School of Education, University of Arizona

College of Education, University of Illinois

Department of Economics, University of Wisconsin

Department of Sociology, University of Wisconsin

In October of 1990 the United States Department of Education requested the National Research Council to convene a panel to review two major evaluation studies of bilingual education. The panel was formed in early 1991 and given the following charge:

The Panel to Review Evaluation Studies of Bilingual Education will review and assess the methodology of data collection and analysis of two major studies to evaluate bilingual education programs: a national longitudinal study of the effectiveness of instruction of limited-English-proficient students and a study to compare the effectiveness of three different instructional strategies for bilingual education for such students. The three strategies are immersion (teachers understand Spanish, but respond in English), early exit (students are placed in classes conducted in English as soon as possible), and late exit (both languages are maintained and a proficiency in English is developed over time).

In the first phase of its study, the panel will:

If, in the panel's assessment, additional data analyses are warranted, and if the Department of Education and the panel agree, the panel would, in the second phase of its study, commission and review the analyses.

The two studies reviewed are The National Longitudinal Study of the Evaluation of the Effectiveness of Services for Language-Minority Limited-English-Proficient Students and The Longitudinal Study of Immersion Strategy, Early-exit and Late-exit Transitional Bilingual Education Programs for Language-Minority Children. Throughout the report the panel has adopted the words Longitudinal Study to describe the first study and Immersion Study to describe the second study. These terms are misleading, but they were the language that the Department of Education adopted in its description of the studies. For the record, the panel notes that both of the studies are longitudinal and that the “immersion” study does not have a real immersion component.

The panel's conclusions and recommendations are presented in Chapter 6. This is a very short chapter and readers who have a limited amount of time may wish to turn there first.

The panel first met in March of 1991, shortly after the final report for the Immersion Study was made available. Subsequent meetings were held in June and December of 1991. This report is the result of the panel's deliberations.

At the outset we thank the panel for its dedication to this project and its willingness to work in a very short time frame.

Many people made generous contributions to the work of the panel. We thank the many staff members of the U.S. Department of Education who attended our meetings, answered our innumerable questions, and provided mountains of reports, interim reports and background material. In particular, the efforts of James English and David Moguel were invaluable. The contractors for the two studies, Development Associates and Research Triangle Institute for the Longitudinal Study and Aguirre International for the Immersion Study, attended our first meeting, provided us with background materials and responded to many questions. Graham Burkheimer of Research Triangle Institute, Malcolm Young of Development Associates, and David Ramirez of Aguirre International were especially helpful. Wallace Lambert of McGill University shared with the panel his experiences in the Canadian immersion studies; his discussions helped to set the stage for many of our own deliberations.

The Departments of Statistics and of Academic Computing and Media at Carnegie Mellon University provided release time to allow Michael Meyer to direct the study and also provided excellent computing support.

Miron Straf, director of Committee on National Statistics, was always available to answer our questions and to assist us through the operations of the National Research Council.

The Committee on National Statistics provided valuable input into the report, and in particular encouraged us to expand the scope of our comments to the general domain of educational research.

Finally, we would like to thank the staff of the Committee on National Statistics, especially our senior project assistant, Michele Conrad. Michele kept the panel informed, organized meetings, provided editorial assistance, suffered our changing schedules, and still managed to keep a cheery disposition. The report would have taken a lot longer to complete without her assistance. 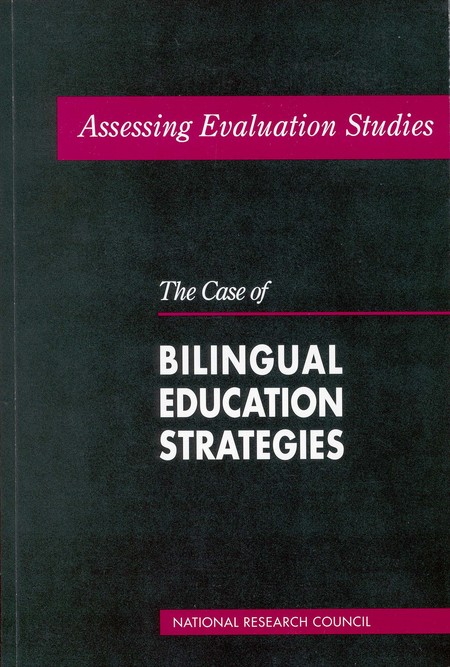 Bilingual education has long been the subject of major disagreements in this country. This book provides a detailed critique of the two largest studies of U.S. bilingual education programs. It examines the goals of the studies and what can be learned from them. In addition, using these studies as cases, this book provides guidelines on how to plan large evaluation studies to achieve useful answers to major policy questions about education.