Get This Book
Visit NAP.edu/10766 to get more information about this book, to buy it in print, or to download it as a free PDF.
« Previous: Executive Summary
Page 9 Share Cite
Suggested Citation:"1 Introduciton." National Research Council. 1992. Putting Biotechnology to Work: Bioprocess Engineering. Washington, DC: The National Academies Press. doi: 10.17226/2052.
×

1.1 BIOTECHNOLOGY: THE CHALLENGE OF THE TWENTY-FIRST CENTURY

Biotechnology, which covers a broad segment of science and its industrial and societal applications, has commanded worldwide attention over the last decade because of its perceived potential impact on the quality of life. In simple terms, biotechnology is the application of science and engineering to the use of living organisms or substances derived from them, to generate products or to perform functions that can benefit the human condition. The products include substances that can help to diagnose, prevent, or cure diseases of humans and animals; to enhance the productivity of or eliminate pests that affect crops; or to replace chemicals or other materials that consume nonrenewable resources or create environmental hazards. The functions include the purification of water and air and the generation of energy or industrial chemicals with minimal environmental impact.

1.2 WHAT IS BIOPROCESS ENGINEERING?

Bioprocess engineering is the subdiscipline within biotechnology that is responsible for translating the discoveries of life science into practical products, processes, or systems that can serve the needs of society. The bioprocess engineer has many missions. Although the most visible today is the production of biopharmaceuticals, bioprocess engineering also has a major role in the existing multibillion-dollar fermentation industries responsible for the production of ethanol, amino acids and other organic acids, antibiotics, and other specialty products.

This committee was convened to address the question of whether the nation's present and future capabilities in bioprocess engineering are commensurate with current and emerging global demands for products and services that are evolving from modern biological science. The committee has elected to focus its attention on the trends in biotechnology that are likely to have important worldwide social and financial impact within the next decade. As is elaborated in this report, the committee's consensus is that America's human and technological resources in bioprocess engineering should be increased to meet the growing demands of biotechnology within the coming decade. The committee suggests a national strategy for establishing and maintaining America's global stature in this important field.

The justification for commercialization of the fruits of any scientific endeavor is the potential for providing marketable goods and services and thereby generating gainful employment and return on invested capital. Basic discoveries in life science within the last 10 years have already created a family of novel biopharmaceutical products with new therapeutic and prophylactic potential. Worldwide annual sales have grown from zero in 1980 to $4 billion in 1991. Further developments in biopharmaceuticals alone are predicted to lead to expansion in global annual sales of $30–50 billion by the year 2000. In addition, recent developments in biological waste treatment and environmental bioremediation are projected to create new industries in waste treatment and modification of chemical processes for waste minimization. Beyond estimation are the enormous savings to be realized after the new technology is implemented. Other growth opportunities for biotechnology are in agricultural chemicals, foods and nutritional supplements, specialty and commodity chemicals, and liquid and gaseous fuels derived from biomass. In many respects, the predicted growth of biotechnology-based industry resembles the immense growth of the pharmaceutical industry after the discovery of penicillin and of the electronics and computer industries after the discovery of the transistor.

The historical record over the last half-century has taught us that, as every new technology matures and reveals large potential markets for its products, price and quality become the dominant factors in market competition; skill and ingenuity in manufacturing are determinants of competitive position and of product price and quality. One of the committee's primary concerns is that the biotechnology industry, as it matures, will suffer the same competitive ills that have beset so many core industries in America.

America has dominated the discovery phase of biotechnology for the last 2 decades, but it has failed to acknowledge the importance of bioprocess engineering in capitalizing on its discoveries in world markets. Our global trading partners (in particular, Japan and Germany, but with the evolving European Economic Community as an even more imposing challenger) accept America's leadership in basic biological science and have yielded to America as the principal source of basic information in biotechnology. Those countries are concentrating their intellectual and fiscal resources on translating that information into industrial practice while maintaining a strong effort in basic research. Consortia of leaders in government, industry, and academe in those countries are devising and implementing strategies for reducing basic scientific discoveries to practice.

The economic potential of biotechnology is not perceived solely by the United States; it is recognized as an opportunity by other technologically advanced countries. Exploitation of this opportunity will require national commitments, dedication of resources, and organization for action. This report attempts to propose a strategy by which the nation can meet this challenge.

The role of bioprocess engineering in the successful commercialization of biotechnology is not fully understood by our national government, industrial, and academic leadership. That is in large measure because first-generation biopharmaceutical products have been successfully produced with only secondary concern for costs of manufacturing. However, products now under development will require novel techniques and more efficient and economical processes. Hence, our participation in the expanding bioproducts market will necessitate an expanded role of bioprocess engineering. This is all the more important because bioprocess engineering could have a profound effect on the existing fermentation industry.

1.6 BARRIERS TO EXPLOITATION OF BIOTECHNOLOGY

A long-range program to strengthen America's base in bioprocess-engineering research, development, and education will contribute to its commercialization of biotechnology. Conduct of the program will require the close collaboration and combined resources of the federal government, industry, and academe.

The economic and social culture of the United States is reflected in a number of barriers:

omy obstruct cooperation between companies within an industry as being restrictive of free trade.

It is the committee's consensus that those challenges must be met and suitable incentives must be provided, if a productive national program in bioprocess-engineering research, development, and education is to be created and implemented.

Next: 2 The Challenge »
Putting Biotechnology to Work: Bioprocess Engineering Get This Book
× 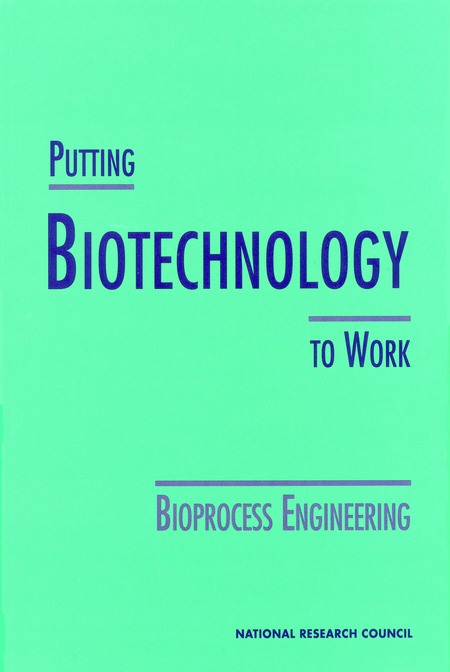 The ability of the United States to sustain a dominant global position in biotechnology lies in maintaining its primacy in basic life-science research and developing a strong resource base for bioprocess engineering and bioproduct manufacturing.

This book examines the status of bioprocessing and biotechnology in the United States; current bioprocess technology, products, and opportunities; and challenges of the future and what must be done to meet those challenges.

It gives recommendations for action to provide suitable incentives to establish a national program in bioprocess-engineering research, development, education, and technology transfer.