Get This Book
Visit NAP.edu/10766 to get more information about this book, to buy it in print, or to download it as a free PDF.
« Previous: Executive Summary
Page 9 Share Cite
Suggested Citation:"1 Introduction." Institute of Medicine. 1993. Veterans at Risk: The Health Effects of Mustard Gas and Lewisite. Washington, DC: The National Academies Press. doi: 10.17226/2058.
×

The whole distressing story of mustard gas poisoning teems with medical interest. But while its lessons are worth taking to heart, we may well hope that the disease itself need only appear in the future text-books of medicine as a curiosity and the relic of a savage age destined never to return.

Modern chemical warfare emerged in 1915, when the German army used chlorine for the first time in a large-scale offensive against the Allies during World War I (WWI). The incident rapidly increased activities on both sides of the conflict toward development of protection against chemical attacks and more effective chemical weapons. As improved gas masks became more effective against inhaled poisons, Germany looked to its stockpile of poison gases to find one that would have damaging effects through absorption into the skin and other mechanisms. Thus, in July 1917, in a field outside of Ypres, Belgium, the blistering agent sulfur mustard, called mustard gas because it had a mustardor garlic-like odor, was used for the first time. Sulfur mustard was destined to cause almost 400,000 casualties during the war, many more than any other chemical agent (Gilchrist, 1928; Prentiss, 1937). Its effectiveness made it a chemical weapon of choice from 1917 to the present day, as evidenced by its use by Iraq against Iran in 1987 (Medema, 1986; United Nations Security Council, 1988).

Although many observers hoped that the end of WWI would be the end of chemical warfare, this was not to be. Mustard agents were used during the next two decades by the British in the Middle East, the

French in Morocco, and the Russians in Central Asia. Strong evidence has been presented that it was used by the Italians in Abyssinia and the Japanese in China. In the beginning of World War II (WWII), the specter of chemical warfare was again raised by reports of the use of mustard by the Germans and the Poles against each other in 1939 (Medema, 1986; Stockholm International Peace Research Institute, 1971; Tanaka, 1988).

Thus, as engagement of U.S. forces in the European conflict began to look inevitable, preparations against the accompanying threat of chemical attack were given a high priority. These preparations included the establishment of secret research programs to develop better protective clothing for the troops and to investigate ointments and salves that might be effective in reducing the blistering effects of sulfur and nitrogen mustard (collectively termed mustard agents) and Lewisite, an organic arsenic-containing compound that shared some properties with mustard agents (Stewart, 1948).

The researchers involved in these programs, frustrated by the lack of adequate animal models of human injury from these chemicals, decided in 1942 that human subjects were needed for experiments with protective clothing materials and ointments (National Research Council, 1942; Office of Scientific Research and Development, 1946). At several centers around the country, top secret research using military personnel as human subjects was begun. The specific protocols, outlined in more detail in the next chapter, included putting drops of sulfur mustard or Lewisite on subjects' arms, either with or without test ointments, and clothing human subjects in suits impregnated with chemicals designed to retard vapor penetration. These subjects repeatedly entered gas chambers filled with vapors of mustard agents or Lewisite until their skin reddened, an indication that the protection of the clothing was failing.

The fears of chemical attacks in the course of WWII were never realized. Military and civilian personnel were injured by sulfur mustard in Bari, Italy, following a German air raid that destroyed a U.S. ship carrying sulfur mustard bombs (Infield, 1976; Perera and Thomas, 1986). The only other individuals injured by mustard agents and Lewisite in WWII were among those who served as subjects in the experiments or who worked with the agents as part of their military, or sometimes civilian, assignments.

In the early 1980s, reports of such injuries and ensuing health problems began to emerge. This seemingly long delay was due to the highly classified nature of the experiments with chemical warfare agents during WWII. After keeping silent for four decades, a few of the human subjects, believing their exposure to these agents was the cause of numerous debilitating diseases, attempted to seek compensation. As time passed and more information became public, claims by individuals

to the Department of Veterans Affairs (VA) for service-connected disability for a variety of diseases and injuries increased. However, untangling the specifics of these claims presented major problems. For example, it was common for the periods of time spent as a volunteer in the gas experiments to be unaccounted for in official service records. Individual claimants therefore had great difficulty providing documentation of their participation in the testing programs. In addition, the assessment of the long-term health effects of sulfur mustard and Lewisite proved difficult. The vast majority of scientific and medical literature dealt solely with acute, short-term effects of these agents.

Pressure from individuals, the press, and Congress on the VA to resolve these issues increased over the intervening years and, on June 11, 1991, guidelines were announced by VA  Secretary Edward J. Derwinski for compensation of the veterans who had been subjects in the mustard and Lewisite testing programs. These guidelines loosened the normal restrictions on documentation for those veterans who participated in the testing programs and identified the diseases that the VA would consider to be residual effects of sulfur mustard or Lewisite. The diseases identified for compensation were laryngitis, chronic bronchitis, emphysema, corneal opacities, chronic conjunctivitis, and keratitis. Veterans filing claims believed that there were still other diseases caused by their exposure to these agents.

In addition to the changes in guidelines, Secretary Derwinski also requested the Institute of Medicine (IOM) to assemble a committee to survey the health effects of mustard agents and Lewisite. This request asked that special attention be paid to the long-term health effects of these agents and for the assessment to be based, to the degree possible within the time allowed and budget provided, upon published scientific literature dating back to 1917. This report results from the deliberations of the IOM Committee to Survey the Health Effects of Mustard Gas and Lewisite, whose specific charges were to

The committee met four times in the course of its work to consider as much of the scientific literature pertaining to mustard agents and Lewisite as possible. It was expected from the beginning that the scientific and medical literature would not be complete and that, for

some diseases, no literature would exist. Thus, in order to determine the constellation of health problems that exposed individuals might have, the committee held a public hearing and collected written and oral statements from over 250 individuals regarding the details of their exposure and their health problems. This information was used to identify those diseases for which gaps in the medical and scientific literature might be of particular consequence. In addition, by holding scientific workshop sessions and by soliciting input from experts with technical knowledge applicable to the issues, the committee gathered information pertaining to a variety of questions about the molecular mechanisms of mustard and Lewisite toxicity, the specific protocols used and dose levels achieved in the WWII testing programs, the psychological health effects of chemical warfare environments and exercises, and other related topics (Appendix A).

This report focuses on the published scientific and medical literature that pertains to the contribution of mustard agent or Lewisite exposure to the development of disease. It includes a bibliography of most of the published literature in English and foreign languages, as well as government technical reports and material from military archives. All served as the basis of the committee's deliberations. A historical analysis of mustard agent and Lewisite research programs, conducted by the military, is included. This analysis was accomplished in part to determine the possible exposure levels the human subjects received in the WWII testing programs. Also included is a summary of the information obtained through the public hearing process (Chapter 4), consultation with outside experts (Appendix A), and analysis of documents relating to military testing programs that used human subjects (Chapter 3). Further, the report assesses the strength of association between specific diseases and exposure to these agents, identifies the gaps in the present knowledge base, and highlights those gaps that warrant special attention. Finally, the report details the committee's final recommendations.

In order to cover this wide range of topics, the report necessarily includes varied levels of information from complex scientific analysis to descriptive sections regarding the public hearing findings and historical analysis. Efforts have been made to make the scientific sections accessible to as broad an audience as possible.

It is hoped that this report will be useful to policymakers and legislators responsible for programs dealing with the health of veterans in the United States. The report may also be of interest to military and civilian planners who face important issues relating to potential future use of chemical warfare agents and to the destruction of current stockpiles of chemical weapons. Further, for these groups and for the affected veterans and their families, the committee hopes that this report is successful in explaining and clarifying the multiple factors that

interact to determine the relationships between exposure to toxic agents and adverse health effects. Finally, the committee hopes that the report will stimulate research to fill the major gaps that still exist in the scientific and medical literature pertaining to the long-term health effects of these agents.

United Nations Security Council. 1988. Report of the mission dispatched by the SecretaryGeneral to investigate allegations of the use of chemical weapons in the conflict between the Islamic Republic of Iran and Iraq. April 25, 1988. S/19823 and S/19823/ Addendum 1. New York: United Nations.

Next: 2 Methods of Literature Collection and Survey »
Veterans at Risk: The Health Effects of Mustard Gas and Lewisite Get This Book
× 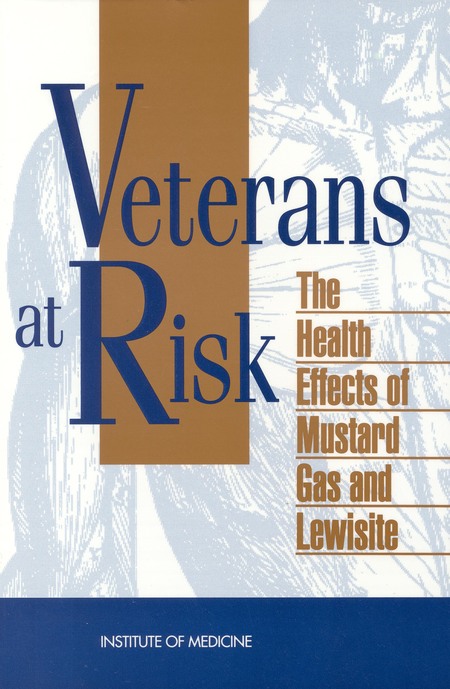