Get This Book
Visit NAP.edu/10766 to get more information about this book, to buy it in print, or to download it as a free PDF.
« Previous: Abbreviations
Page 419 Share Cite
Suggested Citation:"Authors." National Research Council. 1993. Managing Global Genetic Resources: Agricultural Crop Issues and Policies. Washington, DC: The National Academies Press. doi: 10.17226/2116.
×

ROBERT W. ALLARD (Subcommittee Chairman) is emeritus professor of genetics at the University of California, Davis. He has a Ph.D. degree in genetics from the University of Wisconsin. His areas of research include plant population genetics, gene resource conservation, and plant breeding. He is a member of the National Academy of Science.

PAULO DE T. ALVIM Since 1963, Alvim has been the scientific director for the Comissão Executiva do Plano da Lavoura Cacaueira (Executive Commission of the Program for Strengthening Cacao Production), Brazil. He earned a Ph.D. degree from Cornell University with specialization in plant physiology, tropical agriculture, and ecology.

JOHN H. BARTON Since 1975, Barton has been a professor of law and director of the International Center on Law and Technology at Stanford University, where he earned his law degree. He is an expert on international trade law and high-technology law and has written and consulted extensively on the legal aspects of biotechnology, including both biosafety and intellectual property issues.

particularly in relation to agricultural research, biotechnology, and the environment.

TE-TZU CHANG In 1991 Chang retired as head of the International Rice Germplasm Center at the International Rice Research Institute, where he was also a principal scientist. He has been a visiting professor at the University of the Philippines, Los Baños, since 1962. He earned a Ph.D. degree in plant genetics and breeding from the University of Minnesota. He had a vital role in the Green Revolution in rice. Chang has broad experience in managing and designing plant gene banks.

PETER R. DAY (Committee Chairman) Before joining Rutgers University as director of the Center for Agricultural Molecular Biology in 1987, Day was the director of the Plant Breeding Institute, Cambridge, United Kingdom. He has a Ph.D. degree from the University of London, and is a leader in the field of biotechnology and its application to agriculture.

ROBERT E. EVENSON Since 1977, Evenson has been a professor of economics at Yale University. He has a Ph.D. degree in economics from the University of Chicago. His research interests include agricultural development policy with a special interest in the economics of agricultural research.

HENRY A. FITZHUGH (Subcommittee Chairman) is deputy director general for research at the International Livestock Center for Africa, Ethiopia. He received a Ph.D. degree in animal breeding from Texas A&M University. His field of research is the development and testing of biological and socioeconomic interventions to improve the productivity of livestock in agricultural production systems.

MAJOR M. GOODMAN is professor of crop science, statistics, genetics, and botany at North Carolina State University (NCSU) where he has been employed since 1969. He has a Ph.D. degree in genetics from NCSU, and his areas of research are plant breeding, germplasm conservation and utilization, numerical taxonomy, history and evolution of maize, and applied multivariate statistics. Goodman is a member of the National Academy of Sciences.

JAAP J. HARDON In 1985, Hardon became the director of the Center for Genetics Resources, The Netherlands. He has a Ph.D. degree in plant genetics from the University of California. His specialty is plant breeding and genetics.

SETIJATI SASTRAPRADJA is affiliated with the National Center for Research in Biotechnology at the Indonesian Institute of Science. She has a Ph.D. degree in botany from the University of Hawaii.

JOHN A. SPENCE In 1989, Spence was appointed head of the Cocoa Research Unit at the University of the West Indies, Trinidad and Tobago. He has a Ph.D. degree from the University of Bristol, United Kingdom. His research interests are cocoa tissue culture and cryopreservation as alternative to holding field germplasm collections. 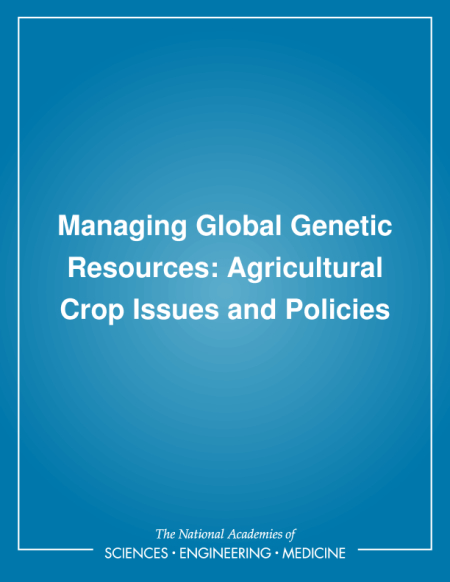 This anchor volume to the series Managing Global Genetic Resources examines the structure that underlies efforts to preserve genetic material, including the worldwide network of genetic collections; the role of biotechnology; and a host of issues that surround management and use.