Visit NAP.edu/10766 to get more information about this book, to buy it in print, or to download it as a free PDF.
Page i Share Cite
Suggested Citation:"FRONT MATTER." National Research Council. 1994. Laboratory Animal Management: Dogs. Washington, DC: The National Academies Press. doi: 10.17226/2120.
×

National Academy Press · 2101 Constitution Avenue, N.W. · Washington, D.C. 20418 NOTICE: The project that is the subject of this report was approved by the Governing Board of the National Research Council, whose members are drawn from the councils of the National Academy of Sciences, National Academy of Engineering, and Institute of Medicine. The members of the committee responsible for the report were chosen for their special competen- cies and with regard for appropriate balance. This report has been reviewed by a group other than the authors according to procedures approved by a Report Review Committee consisting of members of the National Academy of Sciences, National Academy of Engineering, and Institute of Medicine. This study was supported by the U.S. Department of Health and Human Services (DHHS) through contract number NO1-CM-07316 with the Division of Cancer Treatment, National Cancer Institute; the Animal Welfare Information Center, National Agricultural Library, U.S. Department of Agriculture (USDA), through grant number 59-32U4-8-60; and Regulatory En- forcement and Animal Care, Animal and Plant Health Inspection Service, USDA, through grant number 59-32U4-8-60. Additional support was provided by the following members of the Pharmaceutical Manufacturers Association: Berlex Laboratories, Inc., Cedar Knolls, New Jersey; Bristol-Myers Squibb Co., New York, New York; Bristol-Myers Research, Princeton. New Jersey; Burroughs Wellcome Co., Research Triangle Park, North Carolina; Dupont Merck Research & Development, Wilmington, Delaware; Johnson & Johnson, New Brunswick, New Jersey; Marion Merrell Dow Inc., Kansas City, Missouri; Pfizer Inc., Groton, Connecticut; Schering-Plough Research, Bloomfield, New Jersey; SmithKline Beecham Pharmaceuticals, Swedeland, Pennsylvania; and Syntex Research, Palo Alto, California. ILAR's core program is supported by grants from the National Center for Research Resources, National Institutes of Health; National Science Foundation; American Cancer Soci- ety, Inc.; and U.S. Army Medical Research and Development Command, which is the lead agency for combined Department of Defense funding also received from the Human Systems Division, Air Force Systems Command; Armed Forces Radiobiology Research Institute; Uni- formed Services University of the Health Sciences; and U.S. Naval Medical Research and Development Command. Any opinions, findings, and conclusions or recommendations expressed in this publica- tion are those of the committee and do not necessarily reflect the views of DHHS, USDA, or other sponsors, nor does the mention of trade names, commercial products, or organizations imply endorsement by the U.S. government or other sponsor. Library of Congress Cataloging-in-Publication Data Dogs: laboratory animal management / Committee on Dogs, Institute of Laboratory Animal Resources, Commission on Life Sciences, National Research Council. p. cm. Includes bibliographical references and index. ISBN 0-309-04744-7 1. Dogs as laboratory animals. I. Institute of Laboratory Animal Resources (U.S.). Committee on Dogs. SF407.D6D64 1994 636.7'0885 dc20 94-960 CIP Copyright 1994 by the National Academy of Sciences. All rights reserved. Printed in the United States of America

Preface It has been 2 decades since the Institute of Laboratory Animal Re- sources first published Dogs: Standards and Guidelines for the Breeding, Care, and Management of Laboratory Animals (National Academy of Sci- ences, Washington, D.C., 1973~. During that period, great strides have been made in improving care and management techniques, making available specific-pathogen-free and purpose-bred dogs, and identifying dogs with precisely defined genetic disorders. The dog has proved to be "man's best friend," not only because it is considered a companion and family member, but also because its use in research has been associated with many break- through discoveries in human medicine (e.g., the discovery of insulin as a treatment for type I diabetes mellitus). The same period has been characterized by increased public awareness and scrutiny of research funding, occupational health and safety, and animal welfare. New federal and state laws specifically intended to protect re- search animals have been promulgated and regulations established. In addi- tion to presenting information relevant to the care and use of dogs in re- search and making recommendations based on an objective evaluation of that information, it was the committee's intent to incorporate in this report those aspects of canine husbandry embodied in federal law. Federal regula- tions and policies protecting dogs in research are therefore summarized in Chapter 1, which provides information for obtaining copies. Specific de- tails of the regulations and policies are given throughout the text. IX

x PREFACE The committee firmly believes that good research requires a good ani- mal-care program. The committee is also aware of the tremendous varia- tion in physiologic traits among canine models. Dogs vary greatly in size, age, health status, physical conformation of the breed, behavioral character- istics, and experience. Therefore, no standard of animal care is likely to be optimal for all dogs. The committee recommends that performance stan- dards be used with sound professional judgment in implementing the ani- mal-care program. Readers who detect errors of omission or commission or who have evidence to support improved procedures are invited to send suggestions to ILAR, National Research Council, 2101 Constitution Avenue, Washington, DC 20418. The committee wishes to thank the entire staff of ILAR, but especially Dr. Dorothy Greenhouse and Ms. Amanda Hull, for assisting in the produc- tion of this manuscript. The committee also acknowledges the many fine contributions made to this report by scientists specializing in the care and use of dogs in research; their names appear on pages iv and v. Fred W. Quimby, Chairman Committee on Dogs

Next: 1 INTRODUCTION »
Laboratory Animal Management: Dogs Get This Book
× 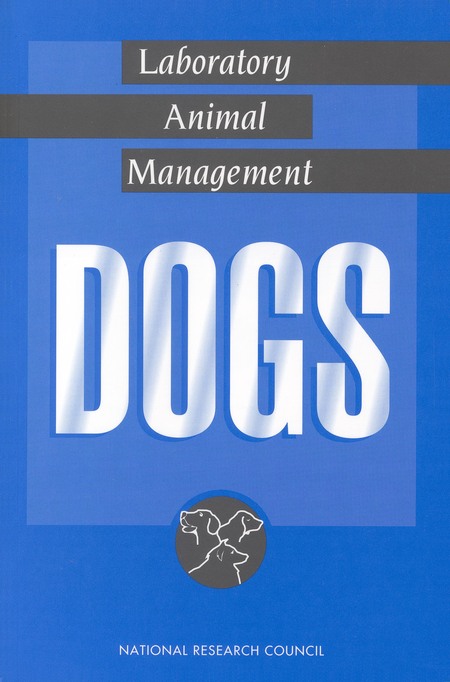 This newly revised edition incorporates the regulatory requirements and improved practices for laboratory animal care that have developed over the past two decades.

Laboratory Animal Management: Dogs examines controversies over proper cage sizes and interpretation of federal requirements for exercise and offers recommendations for researchers. Guidelines are provided on how to recognize and alleviate pain and distress in research dogs and on the sensitive topic of euthanasia.

Laboratory Animal Management: Dogs discusses how to assemble a proper research protocol and how to handle conflicts. Outlined are procedures for institutional animal care and use and committee review. The volume also presents guidelines for handling aging dogs, use of radiation in experiments, and a wide range of other special circumstances.

Thoroughly referenced, this guide will be indispensable to researchers, research administrators, review committees, and others concerned about laboratory dogs.