Chapter:11 Need for Research and Surveillance

Get This Book
Visit NAP.edu/10766 to get more information about this book, to buy it in print, or to download it as a free PDF.
« Previous: 10 Death
Page 305 Share Cite
Suggested Citation:"11 Need for Research and Surveillance ." Institute of Medicine. 1994. Adverse Events Associated with Childhood Vaccines: Evidence Bearing on Causality. Washington, DC: The National Academies Press. doi: 10.17226/2138.
×

11
Need for Research and Surveillance

The lack of adequate data regarding many of the adverse events under study was of major concern to the committee. Presentations at public meetings indicated that many parents and physicians share this concern. Although the committee was not charged with proposing specific research investigations, in the course of its reviews additional obvious needs for research and surveillance were identified, and those are briefly described here.

Recent advances in molecular analysis of diphtheria and tetanus toxins make it possible to construct mutant toxins that would be potentially safer, more immunogenic, and more readily purified for use as vaccines. A nontoxic variant of diphtheria toxin (CRM197) is already used as a protein carrier molecule in one of the licensed Haemophilus influenzae type b polysaccharide-protein conjugate vaccines (see Chapter 9). If mutant toxin vaccines are more immunogenic than the presently used chemically inactivated toxins, successful immunization might be achieved with fewer doses and fewer adverse events.

Understanding the molecular basis for the risk of aseptic meningitis after immunization with the Urabe mumps strain (compared to the experience with the Jeryl Lynn strain) might lead to better understanding of the pathogenetic capacity of mumps virus and to principles of viral pathogenesis that would aid in the development of safe attenuated virus vaccines in the future.

Insulin-dependent diabetes mellitus (IDDM) is a serious and relatively common disorder. The large number of reports raising the suspicion that mumps vaccine might induce the onset of IDDM suggests the need for systematic study of the question.

There is a need to understand the basis for reversion of oral polio vaccine to a more virulent form to prevent its occurrence.

Evidence is inadequate to accept or reject a causal relation between hepatitis B vaccine and Guillain-Barré syndrome, transverse myelitis, optic neuritis, multiple sclerosis, or other demyelinating syndromes. The absence of reports of such outcomes in large-scale field trials suggests that if hepatitis B vaccine causes these adverse events, it does so at a very low frequency. Nevertheless, the number of reports questioning the relation between hepatitis B vaccine to one or the other of these disorders of similar character suggests the need for systematic research.

The possibility that hepatitis B vaccine can cause an exacerbation of rheumatoid arthritis should be carefully evaluated in a population-based study.

The committee found that the evidence favors acceptance of a causal relation between tetanus toxoid and Guillain-Barré syndrome (GBS) and between oral polio vaccine and GBS. For the other vaccines, the association with GBS is inconclusive, and research is needed to clarify the association. The following information is potentially obtainable through research: (1) the background incidence of GBS in the U.S. by year of life in the pediatric age group, particularly in infants and preschool-age children; (2) the incidence of GBS after the receipt of each vaccine and combination of vaccines administered to children or adults; and (3) more precise knowledge

of the mechanisms and sequence of events that result in vaccine-induced GBS.

The committee encourages active and aggressive follow-up of the reports to passive surveillance system of death in association with immunization. This follow-up should be timely and might include elements such as medical records, laboratory tests, and autopsy results. See the section on General Surveillance and Epidemiologic Studies for elaboration.

SIMULTANEOUS ADMINISTRATION OF MORE THAN ONE VACCINE

The committee was able to identify little information pertaining to the risk of serious adverse events following administration of multiple vaccines simultaneously. This is an issue of increasing concern as more vaccines and vaccine combinations are developed for routine use. Both pre- and postmarketing research should address the issue.

The committee was able to identify little information pertaining to why some individuals react adversely to vaccines when most do not. When it is clear that a vaccine can cause a specific adverse event, research should be encouraged to elucidate the factors that put certain people at risk for that adverse reaction.

Postmarketing surveillance of licensed vaccines in the United States depends upon voluntary reporting. Large numbers of alleged adverse events are reported to the Vaccine Adverse Event Reporting System (VAERS) of the Centers for Disease Control and Prevention and the U.S. Food and Drug Administration. The committee found, however, that follow-up of serious adverse events was often incomplete, and the reported event was often not confirmed because of insufficient clinical, laboratory, or pathologic data. The committee suggests that, in the least, research should be conducted on the performance of passive reporting systems like VAERS. What is the quality and completeness of the information supplied? Can the reports received be used to estimate the true risk of vaccine-induced adverse events? Perhaps most important, how well does the surveillance system detect new

adverse events, events not previously reported in the medical literature or demonstrated in epidemiologic studies?

The committee encourages the consideration of a more active system. Such a system might follow a representative sample of new vaccine recipients rather than the population at large. Alternatively, a randomly selected subgroup of serious adverse events reported to VAERS might be investigated fully. This latter approach suffers the inevitable limitations of retrospective review. It may be necessary to retain some broad-based passive reporting system to serve an early-warning function for unpredicted adverse events.

The committee found that a judgment regarding causality was often limited by the absence of background data for the occurrence of the pathologic condition (the putative adverse event) in apparently normal individuals not recently exposed to the vaccine. Regional or national disease registries could be established for those rare but serious conditions suspected of sometimes being caused by one or more licensed vaccines, for example, GBS, transverse myelitis, optic neuritis, and Stevens-Johnson syndrome. Such disease registries, if reasonably complete, would provide information about the descriptive epidemiology of these conditions, including age-, sex-, and race-specific background incidence rates. This information would facilitate the performance of case-control studies and other attempts to investigate vaccines as potential causes of the disorders.

The committee believes that future clinical trials of vaccines licensed or under development should study the serious adverse events examined by the present committee and its predecessor committee. Although any single trial may be too small to detect an effect of vaccine on rare adverse events, meta-analyses of several large trials may provide useful information. Meta-analysis could also be used to improve the statistical power of case-control studies to detect rare sequelae of vaccine administration.

With the existence of the large databases that have recently been established for defined populations, cohort studies become a feasible and desirable epidemiologic method of detecting the adverse effects of vaccines. Cohort studies would also permit the follow-up of patients exposed to specific vaccine types or batches that are suspected (e.g., on the basis of case reports) of being associated with a pathologic condition. Here, too, meta-analyses of cohort studies from different settings and different databases may permit identification of effects not detectable within individual studies.

Next: APPENDIX A Executive Summary from Adverse Effects of Pertussis and Rubella Vaccines »
Adverse Events Associated with Childhood Vaccines: Evidence Bearing on Causality Get This Book
× 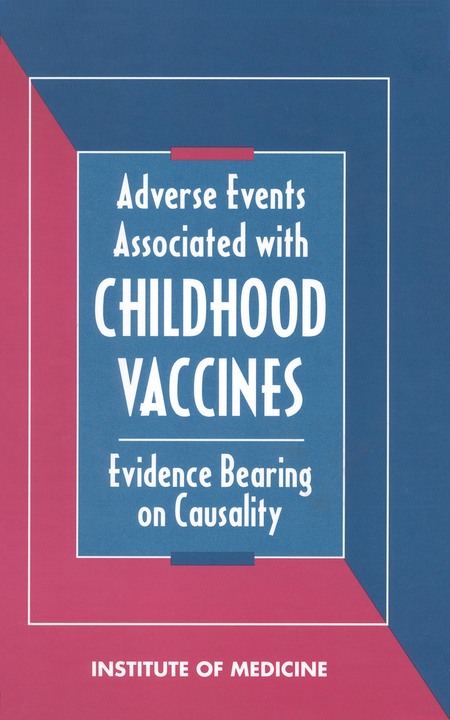 Childhood immunization is one of the major public health measures of the 20th century and is now receiving special attention from the Clinton administration. At the same time, some parents and health professionals are questioning the safety of vaccines because of the occurrence of rare adverse events after immunization.

The authors discuss approaches to evidence and causality and examine the consequences—neurologic and immunologic disorders and death—linked with immunization. Discussion also includes background information on the development of the vaccines and details about the case reports, clinical trials, and other evidence associating each vaccine with specific disorders.

This comprehensive volume will be an important resource to anyone concerned about the immunization controversy: public health officials, pediatricians, attorneys, researchers, and parents.