Anthropogenic: Caused by people and their activities.

Biodiversity, Marine: The variety of life found in the ocean and on or within the sea floor, especially related to species and genetic variation.

Biogeochemical: The nexus of biological, geological, and chemical processes; may be used to refer to just two of the three components.

Biosphere: That part of the planet that harbors life; used here in reference to “deep biosphere” or “subseafloor biosphere” to denote the microbial communities beneath the seafloor.

Carbon Cycle: The biogeochemical processes by which carbon is exchanged among the ocean, atmosphere, land and subseafloor, and biosphere. It is often used together with the nitrogen, water, and other cycles to describe those global cycles that allow the Earth to sustain life.

Climate: The slowly varying aspects of the atmosphere-ocean-land surface system. Typically characterized in terms of averages over a month or more, climate includes both the temporal and spatial variability of these averages.

Connectivity (biological context): How different species and trophic levels are connected; dispersion or dispersal of organisms from place to place.

Extreme Events: Events that are outside average experience and expectation, used in relation to natural occurances such as hurricanes.

Fluids: In this report, used to denote liquids (especially seawater) and gases (especially from the atmosphere); does not include magma.

Ocean Acidification: A term used to describe significant changes to the chemistry of the ocean. It occurs when carbon dioxide gas (or CO2) is absorbed by the ocean and reacts with seawater to produce acid. The change in ocean chemistry caused by absorption of excess CO2 from the atmosphere. The reaction of CO2 with seawater causes a decrease in pH and an increase in the solubility of calcium carbonate, in the primary structural component of many marine species including clams, oysters, reef-building corals and calcareous plankton..

Ocean Circulation: The large-scale movement of water, created by horizontal currents and vertical motion such as upwelling and overturning, and driven by winds and the exchange of heat and freshwater at the air-sea interface.

Predictability: Used in a nontechnical sense to mean the extent to which natural phenomena can be forecast by existing models and data. Improved understanding of the phenomena can usually contribute to its predictability. We also distinguish between efforts to enhance predictability and efforts to make forecasts; the former are the focus of research activities, whereas the latter are often the province of operational agencies.

Readiness: Some topical areas are ready to be worked on: the tools and infrastructure exist, the money is possibly available, the questions are clear, the community interested in it is energized and perhaps growing, and the partners are ready and willing. It is “low-hanging fruit” in the sense that one does not need for it to ripen further. This does NOT imply that results will come quickly, only that the research can begin quickly.

Resilience: The capacity of an ecosystem to respond to a perturbation or disturbance by resisting damage and recovering quickly. Some research suggests resilience is degraded if biodiversity is decreased.

Societal Impact: An increasing emphasis at NSF and in government-funded programs in general is to focus funding on areas of societal relevance. The federal themes of ocean-related societal relevance are stewardship of natural and cultural ocean resources, increasing resilience to natural hazards and environmental disasters, maritime operations and the marine environment, the ocean’s role in climate, improving ecosystem health, and enhancing human health.

Transformative: The potential for radically changing the understanding of—and how one thinks about—the topic being investigated, if the research is successful.

Next: Appendix E: Acronyms Used in the Report »
Sea Change: 2015-2025 Decadal Survey of Ocean Sciences Get This Book
× 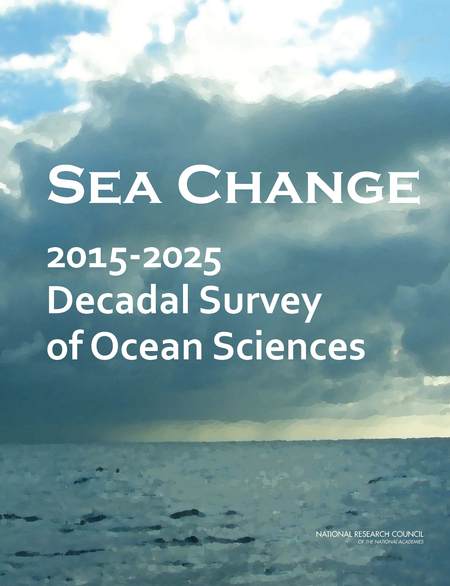 Ocean science connects a global community of scientists in many disciplines - physics, chemistry, biology, geology and geophysics. New observational and computational technologies are transforming the ability of scientists to study the global ocean with a more integrated and dynamic approach. This enhanced understanding of the ocean is becoming ever more important in an economically and geopolitically connected world, and contributes vital information to policy and decision makers charged with addressing societal interests in the ocean.

Science provides the knowledge necessary to realize the benefits and manage the risks of the ocean. Comprehensive understanding of the global ocean is fundamental to forecasting and managing risks from severe storms, adapting to the impacts of climate change, and managing ocean resources. In the United States, the National Science Foundation (NSF) is the primary funder of the basic research which underlies advances in our understanding of the ocean. Sea Change addresses the strategic investments necessary at NSF to ensure a robust ocean scientific enterprise over the next decade. This survey provides guidance from the ocean sciences community on research and facilities priorities for the coming decade and makes recommendations for funding priorities.