Get This Book
Visit NAP.edu/10766 to get more information about this book, to buy it in print, or to download it as a free PDF.
« Previous: Appendix B: Workshop Agenda
Page 77 Share Cite
Suggested Citation:"Appendix C: Background Questions and Panelist Responses." Institute of Medicine. 2015. Spread, Scale, and Sustainability in Population Health: Workshop Summary. Washington, DC: The National Academies Press. doi: 10.17226/21708.
×

Panelists were asked to provide the roundtable with written responses to the following questions prior to the workshop. The responses provided by the panelists for each case example follow. 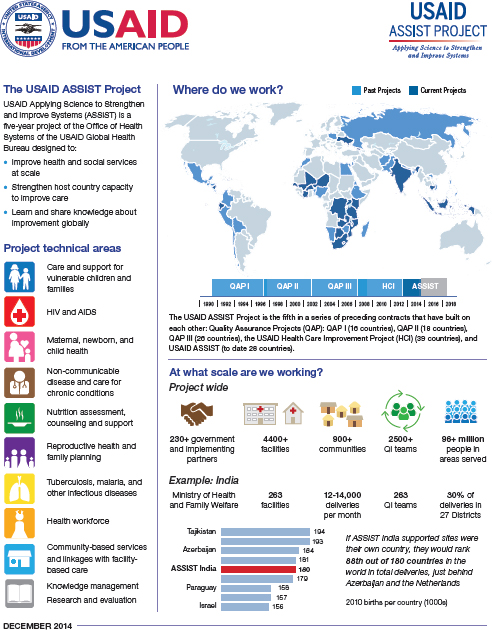 What are we improving at what scale? 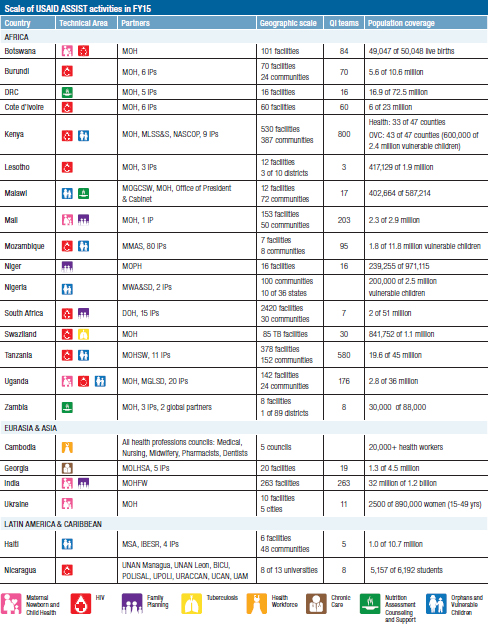 CMMI was established by section 1115A of the Social Security Act (as added by section 3021 of the Affordable Care Act). Congress created the innovation center for the purpose of testing “innovative payment and service delivery models to reduce program expenditures … while preserving or enhancing the quality of care” for those individuals who receive Medicare, Medicaid, or Children’s Health Insurance Program benefits.

Congress provided the Secretary of Health and Human Services with the authority to expand the scope and duration of a model being tested through rule making, including the option of testing on a nationwide basis. In order for the secretary to exercise this authority, a model must demonstrate either reduced spending without reducing the quality of care or improved quality of care without increasing spending, and it must not deny or limit the coverage or provision of any benefits. These determinations are made based on evaluations performed by the Centers for Medicare & Medicaid Services (CMS) and the certification of CMS’s chief actuary with respect to spending.

Spread and Scale of the Innovation

Annual federal spending by Medicare and Medicaid is approximately $772 billion, and the programs consume 22 percent of the federal budget, covering about 54 million Americans with Medicare and 70 million people via Medicaid. As a result, federal policy in these programs has the potential to drive significant impact through their scale. As of 2013, more than 50,000 providers were engaged by CMMI models, which served more than 1 million Medicare and Medicaid beneficiaries. Typical models can range from 3 to 5 years in duration, though there are several examples of Medicare demonstration projects that have continued for extended periods of time.

The spread and scale of models is typically supported by evaluation, learn/diffusion strategies, and public accountability for results of pilot programs, which are released publicly.

Community Solutions is working on a real-time, data-driven approach to ending homelessness, and it is especially focused on those individuals who are in the most acute need and have been homeless the longest. We view homelessness in America as a public health emergency, as the mortality rate for street homelessness is on par with some forms of cancer, cutting a person’s lifespan by an average of 25 years.

By using learnings from the collective impact and lean start-up models, Community Solutions has quickly spread the work of ending chronic homelessness across the United States by scaling up best practices and embracing targeted, data-driven solutions.

We began with a prototype called Housing First, which provides people experiencing homelessness with housing as quickly as possible and without preconditions, and then provides services to these people as needed. Although developed more than 20 years ago, the Housing First model had not spread far beyond Pathways to Housing, Inc., the developer of the concept. This simple concept has revolutionized the work of ending homelessness.

We then piloted a method of organizing housing services within a community, using the Housing First model to prioritize people based on vulnerability and moving those with the greatest need into housing as quickly as possible. This pilot started in Times Square in New York City and quickly spread to five other vanguard communities across the country (Albuquerque, Charlotte, Denver, the District of Columbia, and Skid Row in Los Angeles). This pilot phase allowed us to develop the right tools and process to house chronically homeless individuals and was pushed forward by the success of these communities.

In July 2010 the national 100,000 Homes Campaign was launched with the help and support of the Institute for Healthcare Improvement (IHI). Joe McCannon (also a speaker at this forum) was our consultant, guru, and facilitator of many meetings. By learning from IHI’s 100,000 Lives Campaign, we set our sights on an audacious goal—to permanently house 100,000 of our most vulnerable and chronically homeless neighbors and transform the way our communities respond to homelessness. The launch of the campaign allowed us to intentionally target the communities with more than 1,000 chronically (i.e., long-term) homeless individuals.

The spread of this work began in 2010, as we spread the idea to more than 180 communities that went on to house more than 105,000 chronically homeless individuals by July 2014. We made significant changes over the 4 years of the campaign, adopting new techniques and scaling up best practices, and we have seen significant returns on our investments. An independent researcher estimates that each year the system saves

$1.3 billion by moving these 100,000 people from the streets to permanent housing.

By the latter part of the campaign, the spread of these ideas and systematic changes began to reach the scale we had hoped to see. By employing a boot camp model (6 to 10 communities gathered in one place for large-scale change), we were able to go far beyond our previous single-community methodology. The boot camps were first used to introduce communities to prioritization and Housing First, and subsequently they were used to dramatically increase housing placements and system redesign.

Following the successful completion of the 100,000 Homes Campaign, Community Solutions launched a new initiative, Zero: 2016. This rigorous and challenging follow-on to the 100,000 Homes Campaign includes a cohort of 71 communities (including 4 states), which have committed to ending veteran homelessness by the end of 2015 and to ending chronic/long-term homelessness by the end of 2016.

We have moved from working with one community at a time to multiple communities simultaneously. We have moved from simply asking communities to know each person by name to using triage rather than chronology to determine their next housing placement. We have moved from “Set your own goal and see if you can meet that goal” to an objective goal—that 2.5 percent of a community’s chronically homeless population should be housed each month. And now communities have committed to doing the impossible: taking veteran homelessness to functional zero by December 31, 2015, and chronic homelessness to functional zero by December 31, 2016.

Disrupting the failed status quo of “managing” homelessness rather than ending homelessness requires systemic change. That is why we required that all communities applying to be part of Zero: 2016 obtain buy-in from key stakeholders and have a signed memorandum of action in place. Communities had to publicly commit to the goals of Zero: 2016 as well as to a number of community actions aimed at helping reach these goals.

The success of Zero: 2016 is based on the learnings from the prototype and pilot phase, but it is not confined to them. The success of this initiative is based on a constantly iterating process: Data from communities are used to plan and drive subsequent steps, and best practices are identified and adopted. For example, in the 100,000 Homes Campaign, communities were lauded and celebrated for meeting their goals and reporting their monthly housing placements; this had never before been viewed as a useful exercise. Now Zero: 2016 communities recognize that meeting goals and reporting not only are required to participate in the initiative, but also are necessary to reach zero within their communities.

Before the beginning of the 100,000 Homes Campaign and Opening Doors (the federal campaign to end homelessness), we had seen very little success in the reduction of homelessness. Since the federal campaign, supported by the 100,000 Homes campaign, we have seen a 33 percent reduction in the number of homeless veterans and a 20 percent reduction in chronic homelessness. This reduction has been a direct result of a national turn toward the use of evidence-based practices, a reliance on what the data show us, and the amazing federal–private collaborations that have been established along the way. By working with the U.S. Department of Housing and Urban Development, the U.S. Interagency Council on Homelessness, and the U.S. Department of Veterans Affairs, we have developed strategic partnerships that have supported our work and impelled us toward meeting the goals of ending veteran and chronic homelessness.

for each group; it is about different actors, messages, and messengers. It means integrating leadership so as to represent the changing demographics and perspectives, equitably distributing resources, and changing the focus of population-based approaches to reach those left behind.

policy, media, and grassroots development. This included small sums of funding, pieced together on an annual and sometimes monthly basis from voluntary health organizations, the Robert Wood Johnson Foundation, Americans for Nonsmokers’ Rights, and Campaign for Tobacco-Free Kids.

Next: Appendix D: Speaker and Moderator Biographies »
Spread, Scale, and Sustainability in Population Health: Workshop Summary Get This Book
× 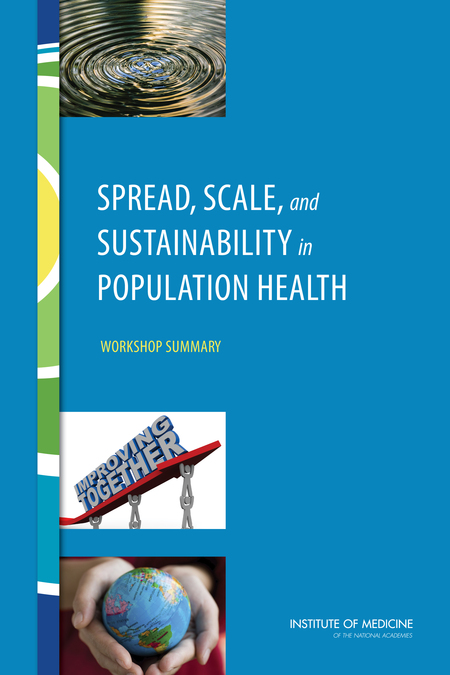 Spread, Scale, and Sustainability in Population Health is the summary of a workshop convened by the Institute of Medicine's Roundtable on Population Health Improvement in December 2014 to discuss the spread, scale, and sustainability of practices, models, and interventions for improving health in a variety of inter-organizational and geographical contexts. This report explores how users measure whether their strategies of spread and scale have been effective and discusses how to increase the focus on spread and scale in population health.