Get This Book
Visit NAP.edu/10766 to get more information about this book, to buy it in print, or to download it as a free PDF.
« Previous: Executive Summary
Page 6 Share Cite
Suggested Citation:"1 Introduction." National Research Council. 2015. Optimizing the U.S. Ground-Based Optical and Infrared Astronomy System. Washington, DC: The National Academies Press. doi: 10.17226/21722.
×

This report outlines a new vision of the nighttime U.S. Optical and Infrared (OIR) System to achieve the science objectives of the decadal priorities and to optimize the science return on federal and non-federal investments. For context, it is instructive to reflect on the status of the OIR System at the time of the National Research Council’s (NRC’s) 1995 McCray report, A Strategy for Ground-Based Optical and Infrared Astronomy,1 and the similarities between the concerns of the U.S. community then and now. Twenty years ago, 80 percent of the total aperture area of telescopes was held privately, and 50 percent of U.S. astronomers relied solely on National Optical Astronomy Observatory (NOAO) facilities for telescope access. At the time, those NOAO facilities included the Mayall 4-meter at Kitt Peak National Observatory (KPNO) in the Northern Hemisphere, the Blanco 4-meter at Cerro Tololo Inter-American Observatory (CTIO) in the Southern Hemisphere, and the NOAO portion of the Wisconsin-Indiana-Yale-NOAO (WIYN) Consortium 3.5-meter, plus a suite of smaller-aperture telescopes that are particularly useful for programs requiring more time than can generally be assigned to any single purpose on a large telescope. These include wide-field surveys, Ph.D. thesis-style projects, and time domain studies. In 1995, Gemini (an international entity that is not part of NOAO) was under construction; the McCray report recommended as its first priority the development of unique capabilities, with increased OIR funding to

support Gemini operations and new instrumentation. With level funding, it was recommended that KPNO be de-prioritized.

Today, the U.S. portion of the Gemini North and South 8.1-meter telescopes provides the public, large-aperture component of the System, and roughly 50 percent of U.S. astronomers continue to rely predominantly on public access (i.e., do not have institutional access to a private medium- to large-aperture telescope). For telescopes with apertures of 2.0 meters or larger, currently 76 percent of the time is private—that is, not available to the entire community. The Large Synoptic Survey Telescope (LSST) is under construction and will be a central, public component of the OIR System in the decade of the 2020s, though it offers data rather than telescope access. Following the Portfolio Review Committee recommendations,2 the KPNO Mayall 4-meter is facing divestiture by the National Science Foundation (NSF), but planning is under way for operations to be transferred to the Department of Energy for the Dark Energy Spectroscopic Instrument (DESI) project later this decade. The smaller-aperture KPNO telescopes, useful for surveys, time domain studies, and instruction, among other things, have also largely been removed from the open-access system.

Given limited resources, the McCray report recommended a new program to leverage private investments by publicly supporting instrumentation at private facilities, with the goals of ensuring the best science, providing public access to a broad range of facilities, and realizing cost savings through efficiencies. This idea was developed and modified by Astronomy and Astrophysics in the New Millennium,3 resulting in the Telescope System Instrumentation Program (TSIP), which operated for 10 years. The McCray report also wrestled with whether instruments should be built in-house at NOAO, at universities, or in collaborations. These issues are all familiar today.

As the number of practitioners of astronomy has grown since the time of the McCray report (membership in the American Astronomical Society grew by 33% from 1990 to 2006, for example),4 new participants among universities and research institutions—including foreign institutions—have emerged in the non-federal sector of U.S. telescopes and instruments. Partnerships among non-federal entities have flourished, especially over the past decade. With the largest telescopes in the non-federal sector, this has led to more restricted community access to frontier ground-based OIR telescopes and instrumentation. Despite the substantial growth

in the number of U.S. telescopes and instruments that are producing high-quality data for astronomical research, and the growth of non-federal investment, the giant telescopes being planned are not fully funded yet. In considering the overall context of U.S. ground-based OIR astronomy, this means there are significant opportunities for partnerships within the U.S. community.

NSF is a critical partner in ground-based astronomy in the United States, although its role within the existing ecosystem as leader, major or minor partner, or enabler, has varied over the years. With NSF support, Gemini is operating and has had several generations of instruments, the Very Large Array (VLA) has recently completed a major upgrade, and the Atacama Large Millimeter/submillimeter Array (ALMA) has come online. The Advanced Technology Solar Telescope (ATST), now the Daniel K. Inoue Solar Telescope (DKIST), and LSST are under construction, supported by the NSF Major Research Equipment and Facilities Construction (MREFC) line. There are two major impacts of these large construction and upgrade projects on the NSF Division of Astronomical Sciences (AST) budget: (1) the need to allocate operations funding for the new facilities from within current and future budgets and (2) the need to support research, both observational and theoretical, motivated and enabled by the resulting data. In preparing for the opportunities with the new facilities, NSF AST has had to plan for divestiture of several existing facilities that the agency has either partially or fully supported in the past. Even with divestiture, the success rate of research proposals both for technical development and for science is likely to stay quite low by historical standards. Furthermore, neither the presidential budget request nor congressional appropriations provide enough funding to carry out many of the highest priorities of the NRC’s decadal surveys in astronomy and astrophysics.

Non-NSF federal support for ground-based astronomy includes investment by NASA, the Department of Energy (DOE), and the Smithsonian Institution in telescope access and instrumentation, which has greatly expanded research opportunities for the community. Nevertheless, the involvement of NASA and DOE in ground-based OIR is focused on particular fields of interest to their programs; mission-driven agency funding is not available across all fields of astronomy. In addition, the Air Force (Department of Defense) has provided some access in the past to a number of military telescopes and has supported Pan-STARRS development.

Progress on many scientific problems in astronomy increasingly relies on synergies between ground-based and space-based observations. This stems in part from the importance of multi-wavelength observations in understanding and interpreting astronomical phenomena. NASA’s operating great observatories, the Hubble Space Telescope (HST), Fermi-GLAST, Chandra X-Ray Observatory, and Spitzer Space Telescope, plus smaller missions such as Kepler and now Kepler 2, NuSTAR, and Swift, provide important complementarity with ground-based OIR

observations. OIR photometry, spectroscopy, and polarimetry in various forms are a mainstay in the characterization of astronomical objects, including those discovered at other wavelengths from space and on the ground. With new and planned NASA missions such as the Transiting Exoplanet Survey Satellite (TESS), the James Webb Space Telescope (JWST), the Wide-Field Infrared Survey Telescope (WFIRST), and European Space Agency missions Gaia and Euclid, this trend is expected to continue.

While the field of astronomy is driven by the existence of state-of-the-art facilities for collecting photons from astronomical sources, the prosecution of research in astronomy, and in particular the physical understanding of astronomical phenomena, requires in addition software, analysis techniques, scientific interpretation, theoretical work, and numerical simulations (the latter two are not considered in this report). Moreover, scientists having various skill sets are needed in all phases of astronomy research: theory, design, implementation, execution, and interpretation. Future progress in astronomy will rely critically on the training, promotion, and retention of creative people.

The question before the committee is how to optimize ground-based optical and infrared astronomy research with the given resources by means of judicious investment and collaborations. This report summarizes the issues and provides some recommendations for achieving science objectives and improving the effectiveness of the U.S. OIR System.

Chapter 2 describes recent decadal science achievements in the OIR and overlapping research with other wavelength regimes on the ground and in space. Chapter 3 reviews the current U.S. public and private telescopes and instruments, summarizes the volume of research output based on their data, gives an overview of archives, and discusses training and the need for continued expertise in several key areas. Chapter 4 reviews the compelling science needs in terms of instrumentation and technology development as LSST and the giant telescopes come online, while Chapter 5 focuses on additional needs to enhance science from LSST data. Chapter 6 presents a revised U.S. OIR System that would entail a telescope time exchange program and a planning process for the community to advise on future needs within the context of the decadal surveys. Chapter 7 collects all the conclusions and recommendations from Chapters 2 through 6. 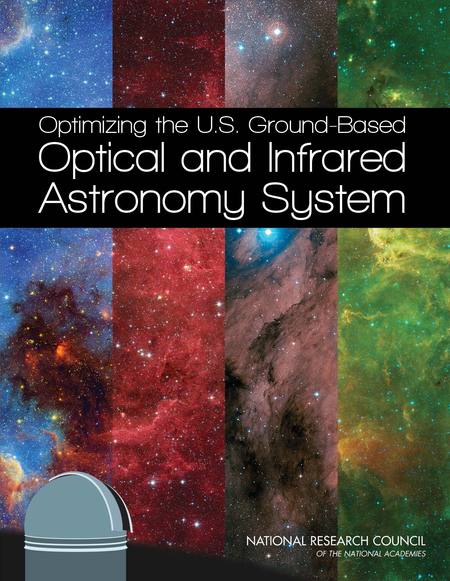 New astronomical facilities, such as the under-construction Large Synoptic Survey Telescope and planned 30-meter-class telescopes, and new instrumentation on existing optical and infrared (OIR) telescopes, hold the promise of groundbreaking research and discovery. How can we extract the best science from these and other astronomical facilities in an era of potentially flat federal budgets for both the facilities and the research grants? Optimizing the U.S. Ground-Based Optical and Infrared Astronomy System provides guidance for these new programs that align with the scientific priorities and the conclusions and recommendations of two National Research Council (NRC) decadal surveys, New Worlds, New Horizons for Astronomy and Astrophysics and Vision and Voyages for Planetary Sciences in the Decade 2013-2022, as well as other NRC reports.

This report describes a vision for a U.S. OIR System that includes a telescope time exchange designed to enhance science return by broadening access to capabilities for a diverse community, an ongoing planning process to identify and construct next generation capabilities to realize decadal science priorities, and near-term critical coordination, planning, and instrumentation needed to usher in the era of LSST and giant telescopes.