Get This Book
Visit NAP.edu/10766 to get more information about this book, to buy it in print, or to download it as a free PDF.
« Previous: SATISH DHAWAN
Page 103 Share Cite
Suggested Citation:"GERALD PAUL DINNEEN." National Academy of Engineering. 2015. Memorial Tributes: Volume 19. Washington, DC: The National Academies Press. doi: 10.17226/21785.
× 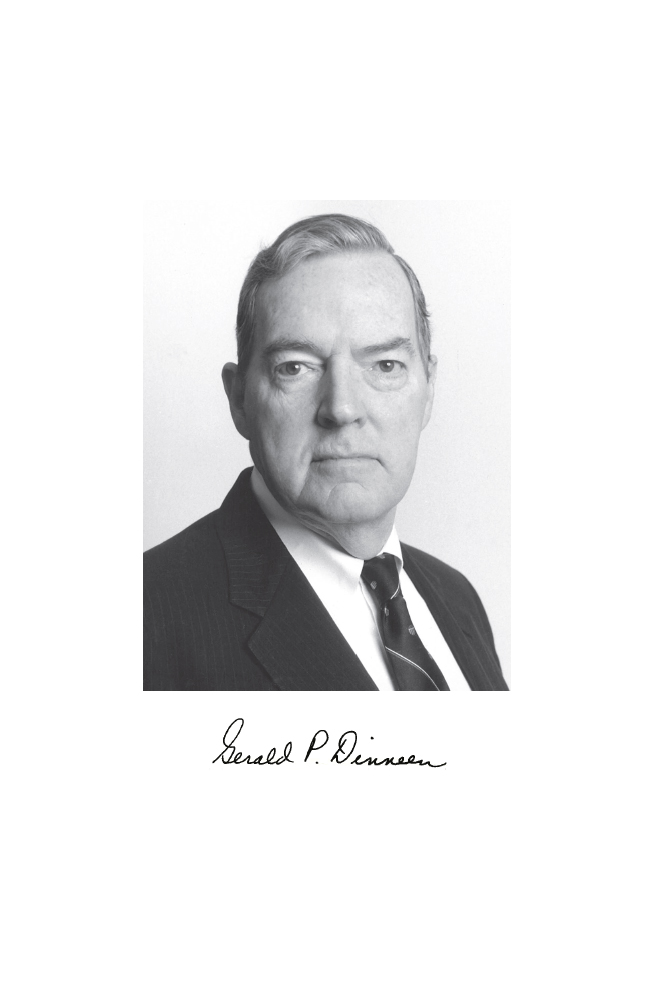 “Contributions to the design of digital computer and satellite communications systems.”

He was born in Elmhurst, New York, on October 23, 1924, and received his early education there. Two years into his study of mathematics at Queens College, his formal education was interrupted by World War II. He enlisted in the US Army Air Corps and studied weather prediction at New York University as part of his military training. Sent to the Pacific Theater, he worked as an air transport officer, and remained in Japan for 10 months after the end of the war. When he returned to civilian life he completed his undergraduate studies, receiving a BS in mathematics from Queens College in 1947. He then studied at the University of Wisconsin, Madison, where he earned an MA and PhD in mathematics in 1948 and 1952, respectively.

Gerry Dinneen began his professional career at Goodyear Aircraft, developing applications of analog computers for real-time control systems. In 1953 he joined MIT Lincoln Laboratory and began a distinguished 24-year career as a technical innovator in digital computing, a leader in the development of the first solid state computers, a visionary in secure military communications, and eventually the director of Lincoln Laboratory for seven years.

Lincoln Laboratory in the 1950s was the lead organization for the US Air Force in the development of a nationwide strategic air defense system. The system architecture featured the first use of a large digital computer, an improved version of MIT’s “Whirlwind” computer, for real-time control of the huge defense system. Students of the history of technology often point to this air defense system as the beginning of the “Information Age.” Dr. Dinneen applied Boolean algebra to program the computer to carry out tasks related to air defense systems. He also explored the humanlike behavior of machines, a field now known as artificial intelligence. Early in the 1950s, when the advent of transistors was enabling smaller computers, he was one of the designers of a new, all solid state general-purpose computer that permitted the real-time control of an advanced radar—a novel concept at the time.

After five years as a member of the research staff, Dr. Dinneen advanced to more managerial roles in the laboratory’s technical programs. Recognizing that improved military communication could significantly enhance the nation’s defense capacity, Lincoln had directed its focus to the development and deployment of communication satellite systems. Dr. Dinneen and his colleagues began the development of satellites and ground terminals to communicate with fixed and mobile platforms (ships, aircraft, and vehicles). During a 10-year period, they built and successfully launched eight communication satellites that ranged in size from 40 to 1,100 pounds. The process involved the design of the satellites, the development of a dedicated space laboratory facility for building and testing them under the extreme conditions of space, and coordination with launch personnel at the Kennedy Space Center. Accompanying these satellites were highly advanced ground terminals that were the first to exploit, in hardware form, the many theoretical advances in communication technology that marked the 1950s and 1960s.

In 1970 Dr. Dinneen was appointed director of Lincoln Laboratory and professor of electrical engineering at MIT. It was a critical time in the laboratory’s history that involved

student unrest and general public distrust of the military, which led to a decline in funding for Department of Defense (DOD) research and development. Dr. Dinneen successfully guided the laboratory through these difficult times, shifting work to several new directions. In addition, he devoted considerable effort to assisting the DOD’s R&D agencies with advice on military electronics technology and capability. He was a familiar figure in the halls of the Pentagon, and his engaging personality put him on a first-name basis with the senior civilian and military leadership.

In 1977, shortly after the inauguration of President Jimmy Carter, Dr. Dinneen was nominated assistant secretary of defense for communications, command and control, and intelligence. During his four years at the DOD, he held primary responsibility for communication satellites and oversaw the global positioning system, the satellite-based navigation system that was originally designed for military ships, aircraft, and ground vehicles and subsequently advanced to the point that it is now used by individuals worldwide. He also supervised programs that allowed data to be digitally communicated to pilots. This technology shift reduced the possibilities for pilot error and was more secure and reliable than traditional voice communication. In addition, he initiated a number of international programs in digital communication, and, in extensive negotiations, including two official visits to China, helped set policies for technology transfer to the People’s Republic of China.

In 1981 Dr. Dinneen joined the Honeywell Corporation in Minneapolis. As chief technical officer he was particularly involved with semiconductor operations, including projects to improve control and security systems for homes and buildings. He also linked the research laboratories more closely to the business goals and objectives of the company, and established programs to encourage scientists and engineers to excel in applied research, including programs through which scientists and engineers could advance without becoming managers. As senior vice president for science and technology, he

was extensively involved with the corporation’s international R&D programs, forming joint teams and encouraging the mobility of engineers. He retired from Honeywell in 1988.

Dr. Dinneen was a senior fellow at the University of Minnesota’s Institute of Technology and an adjunct associate at the university’s Hubert H. Humphrey Institute of Public Affairs. His membership on many advisory boards and panels included an extended term on the Air Force Scientific Advisory Board. As an honorary trustee of the Science Museum of Minnesota, he was instrumental in developing a technology facility and exhibit. He was a member of the board of directors of Votan Corp., Microelectronics and Computer Technology Corporation, Honeywell Foundation, Corporation for Open Systems, and Honeywell-NEC Supercomputers.

Dr. Dinneen was elected to the National Academy of Engineering in 1975 and served as a member of its governing council (1984–1995) and as foreign secretary (1988–1995). He set policies and goals for the academy’s foreign members and contributed to the growth and development of the international Council of Academies of Engineering and Technological Sciences (CAETS). He was also an active participant in and leader of the National Research Council (NRC)’s international programs. In 1995 he was elected a fellow of the Royal Academy of Engineering, and in 1996 the NAE honored his contributions with a special symposium, “The Global Agenda for American Engineering.”

He received the DOD Medal for Distinguished Public Service and was twice awarded the Exceptional Civilian Service Award from the US Air Force. In addition, he received the Distinguished Service Medal from the Armed Forces Communications and Electronics Association, which also named him Man of the Year; the Navy Certificate of Commendation for service on the NRC Committee on Undersea Warfare; and the Army Certificate of Achievement for Service on the Army Materiel Acquisition Review Committee.

Gerry Dinneen was devoted to his wife of 65 years, Mary (Purington) Dinneen, and their two daughters, son, and five grandchildren. He was a man of great technical breadth who

made substantial contributions to national security throughout his career. He was also a man of uncommon personal grace, standing tall, handsome, friendly, and always with a smile. He had the enviable talent of never forgetting a name. He will be remembered for his integrity, calm leadership, and dedication to the nation.

Next: DANIEL C. DRUCKER »
Memorial Tributes: Volume 19 Get This Book
×