Get This Book
Visit NAP.edu/10766 to get more information about this book, to buy it in print, or to download it as a free PDF.
« Previous: GERALD PAUL DINNEEN
Page 109 Share Cite
Suggested Citation:"DANIEL C. DRUCKER." National Academy of Engineering. 2015. Memorial Tributes: Volume 19. Washington, DC: The National Academies Press. doi: 10.17226/21785.
× 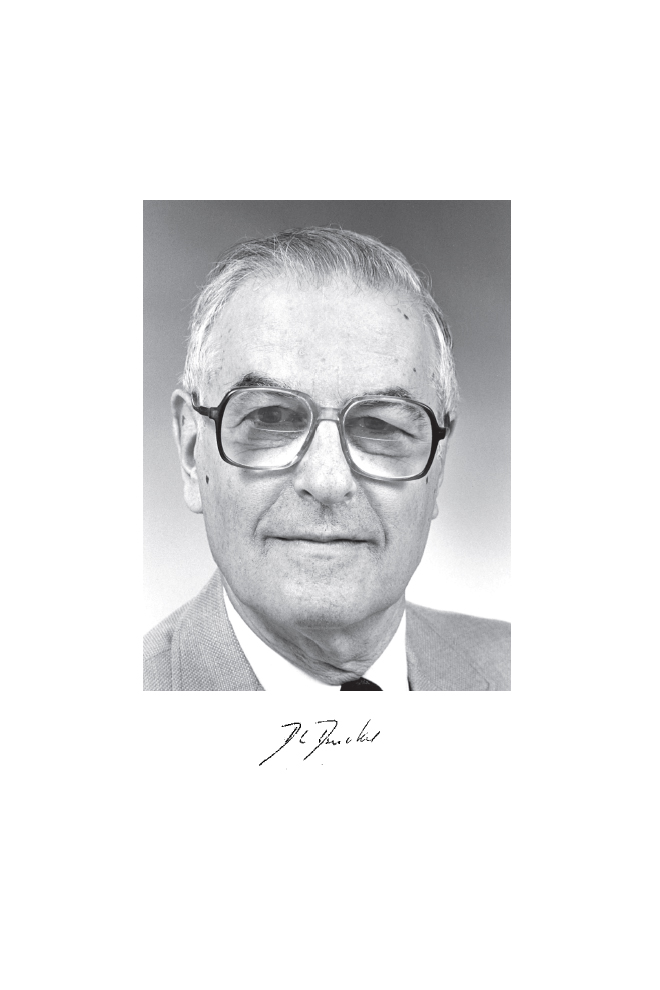 DANIEL CHARLES DRUCKER, 83, died of leukemia on September 1, 2001, in Gainesville, Florida. He was known throughout the world for contributions to the theory of plasticity and its application to analysis and design in metal structures.

He introduced the concept of material stability, now known as Drucker’s stability postulate, which provided a unified approach for the derivation of stress-strain relations for plastic behavior of metals. His theorems led directly to limit design, a technique to predict the load-carrying capacity of engineering structures. He also made lasting contributions to the field of photoelasticity. His 1940 paper has become a classic and Drucker’s oblique incidence method is widely used in university and industrial photoelastic laboratories.

Dan Drucker was born in New York City on June 3, 1918, and started his engineering career as a student at Columbia University. His ambition was to design bridges, but as an undergraduate he met a young instructor named Raymond D. Mindlin (later a founding member, president, and honorary member of the Society for Experimental Stress Analysis, now known as the Society for Experimental Mechanics; SESA/SEM) who told him that “he would pursue a PhD degree and he would write a thesis on photoelasticity.” Dan complied, and

received his doctorate in 1940. It was during his student days that he met Ann Bodin; they eloped and were married in 1939.

He taught at Cornell University from 1940 to 1943 before joining the Armour Research Foundation. After serving in the US Army Air Corps, he returned to the Illinois Institute of Technology for a short time before he went in 1947 to Brown University, where he did much of his pioneering work on plasticity.

In 1968 he joined the University of Illinois as dean of engineering. During his more than 15 years there the College of Engineering was consistently ranked among the best five in the nation. The college was known for both its insistence on technical excellence and its commitment to equal opportunity for all.

Dan left Illinois in 1984 to become a graduate research professor at the University of Florida, from which he retired in 1994.

Few people have served the engineering profession with such dedication and distinction as Dan Drucker. He was a charter member of the American Academy of Mechanics (AAM), served as its third president, and received the AAM Award for Distinguished Service to the Field of Theoretical and Applied Mechanics. In addition, he was president of the American Society of Mechanical Engineers (ASME; and editor of the Journal of Applied Mechanics for 12 years), American Society for Engineering Education (ASEE), SESA/SEM, and International Union of Theoretical and Applied Mechanics (only the second American to serve in that office), among others.

ASME established the Daniel C. Drucker Medal in his honor to recognize sustained, outstanding contributions to applied mechanics and mechanical engineering through research, teaching, and/or service to the community. Dan was the first recipient of the medal, which was presented at an 80th birthday luncheon honoring him during the Thirteenth US National Congress of Applied Mechanics in Gainesville in June 1998. ASME also honored him with the Timoshenko Medal (1983), the Thurston Lectureship, the ASME Medal (1992), and honorary membership. SESA/SEM conferred upon him honorary

membership, the William M. Murray Lectureship, and the M.M. Frocht Award (1971), and ASCE presented him the Theodore von Kármán Medal (1966). In addition, he was honored with the Gustave Trasenter Medal from the University of Liège; the Egleston Medal (1977) and the Illig Medal from Columbia University; the first William Prager Medal (1983), from the Society of Engineering Sciences; the John Fritz Medal (1985) from the Founder Engineering Societies; and the Modesto Panetti and Carlo Ferrari International Prize and Gold Medal (1999) from the Academy of Sciences of Turin. After his death, his daughter Mady found among his mementos a “Medal for Getting the Most Medals” that someone had jokingly presented to him.

An articulate speaker who gave stimulating and informative talks, Dr. Drucker was selected in 1966 as the ASTM Marburg Lecturer and was frequently invited to deliver keynote and other major addresses at engineering meetings. He had a reputation as an incisive thinker and his advice was eagerly sought, and generously given, at the university, state, and national levels. A list of such participation is too long to be given here, but recent examples include the NAS Committee on Human Rights, NRC Engineering Research Board, and National Science Board.

I met Dan during my first SESA meeting in 1949. I had just started working toward a PhD at the University of Illinois and intended to write a thesis on three-dimensional photoelasticity. Tom Dolan, my advisor, also attended that meeting and made sure that I met the important SESA members. When he saw Ray Mindlin and Dan Drucker across the room, he said to me, “Come over here, I want you to meet these two. They think things through pretty well before they speak, and are

usually right.” That was my introduction to Dan Drucker, and Tom was right.

After that I started to see Dan regularly at meetings and he always greeted me with a big smile and a handshake. He had just written the chapter on three-dimensional photoelasticity for the Handbook of Experimental Stress Analysis (John Wiley & Sons, 1950), so I often talked with him about my proposed thesis. He was easy to talk with and always very helpful. In a sense he was a mentor for me even while he was still at Brown University. That happy relationship continued as we both worked through the various SESA offices and during his tenure as a very busy dean at the University of Illinois. He always made time to talk with me about technical subjects or engineering society business.

My wife Nikki and I moved to Florida in 1981. When the Druckers became our neighbors in Gainesville three years later, our social life increased by a factor of ten. Ann was a very generous person with a great sense of humor. She was interested in everything and we all went to countless plays and musical performances together. Typically we would have dinner, attend the play, then end up at one of our houses for dessert. For Nikki and me those years were our Camelot.

When Dan came to Florida he immediately joined our department’s “lunch bunch,” which met every school day at noon. At various times the group included Knox Millsaps, Larry Malvern, Ray Bisplinghoff, Hans von Ohain, ChiaShun (Gus) Yih, Dan, and me. What a wonderful group of colleagues! I felt truly blessed. Now all of these special friends have passed away and they are sorely missed.

Up until the last month of his life, Dan and I still tried to have lunch three days a week. Those were happy occasions, even though we both realized that the inevitable was sneaking up on him. We didn’t dwell on that and found lots of things to laugh about. He had a great sense of humor, but never told a joke (off-color or otherwise). And in the thousands of hours we spent together, I never heard him utter a single swear word or spread gossip. I have never met a more honest or pure person.

He was the kind of person that we all try to be. He succeeded where the rest of us fall far short.

Several people who knew how special Dan was sent email messages after his death. Their words are much more eloquent than mine so I quote from them here.

From Philip Hodge: “I admired Dan the scientist-engineer. But I also admired and liked Dan the person. He was one of the most informed, the most fair, the most tactful, the most organized people I have ever known. I have watched him chair meetings of the ASME Council and of the IUTAM General Assembly—and it was a joy to see how he managed to make those highly autocratic bodies more democratic—and all without hurting anyone’s feelings….”

Karl Pister wrote to several colleagues, “I know this [sad news] hits all of us hard. We have each had the privilege of knowing and working with Dan in some capacity. He was both a role model and a mentor for me, even at a distance, and he was invaluable as a member of my advisory committee while I was dean at Berkeley. What a splendid legacy he has left us, what an impact he had on so much—not just applied mechanics. We were fortunate to have known and worked with such a man. With sadness filled with respect, Karl.”

Dick Christensen wrote to me, “I feel about the same way that you must. He really was very special. I know for sure the succeeding generations in our field don’t have any more like him. I had been emailing with him and did so the last time 4 days before his death. At least I feel a little good about that.”

Ben Freund said, “I am deeply sorry to learn that we have lost one of the brightest stars our field has known in my time. It happens that I have recently come back from this year’s IUTAM Bureau meeting in Warsaw. While participating, I found myself thinking ‘How would Dan handle this problem?’ several times when sticky issues came up.”

Mike Fourney added, “I was fortunate to send [Dan] an email and to receive a reply before he passed…. He was certainly a great guy and I know that you will miss him, as will we all.”

The Drucker family received letters of condolence from all over the world; Mady was kind enough to give me a copy of most of them. The common thread in all the letters was that Dan was not only highly respected as an engineering leader but also tremendously admired as a person. Everyone mentioned that his kindness and help had influenced their careers and their lives. What an impact he made and what a legacy he left!

Dan and the 20-year-old girl with whom he eloped lived for more than 61 years as a very devoted and loving couple. In 1994 Ann suffered a severe stroke that confined her to a wheelchair. Dan stayed near always—although he had traveled extensively all of his professional life, he never left Gainesville after her stroke. She died on December 30, 2000. Their son, Dr. David Drucker, lives in Utica, New York, and daughter Mady Drucker Upham is in Rockport, Massachusetts. There are four grandchildren.

Next: LESTER F. EASTMAN »
Memorial Tributes: Volume 19 Get This Book
×