Get This Book
Visit NAP.edu/10766 to get more information about this book, to buy it in print, or to download it as a free PDF.
« Previous: DANIEL C. DRUCKER
Page 117 Share Cite
Suggested Citation:"LESTER F. EASTMAN." National Academy of Engineering. 2015. Memorial Tributes: Volume 19. Washington, DC: The National Academies Press. doi: 10.17226/21785.
× 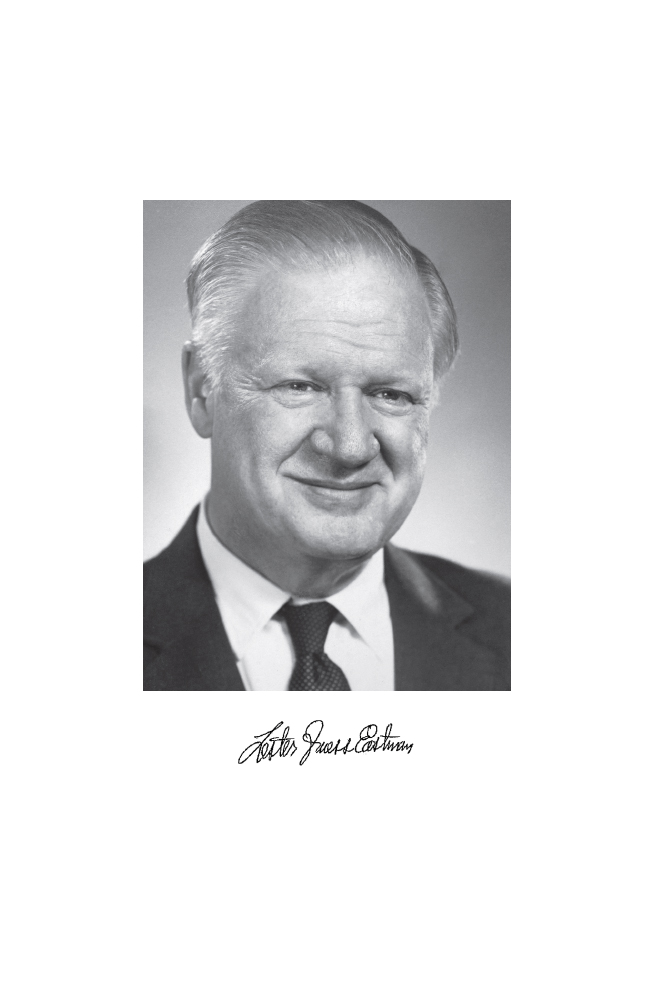 “For pioneering and continuing contributions to communications technology resulting from the development of high-speed and high-frequency gallium arsenide devices.”

Les, as he was known, was born May 21, 1928, and grew up in Waterville, New York, a village 15 miles south of Utica. At the age of 18, he underwent Navy basic training at Great Lakes Naval Academy and served as a radar technician aboard the USS Coral Sea during its commissioning voyage (1946–1948).

His early naval experience with radar prepared him ideally for his career researching leading-edge high-frequency solid state devices. With characteristic excitement, he embarked on development of compound semiconductor materials and devices. As a pioneering researcher in exotic devices made

from even more exotic materials, Les and his faculty colleagues and students were forced to delve deeply into basic materials science and engineering and materials fabrication as well as device physics. His work encompassed compound semiconductor materials and devices, epitaxy, microwave and millimeter wave transistors and integrated circuits, and semiconductor lasers and photodetectors and their integration with transistors. His multidisciplinary research spanned six decades and helped stimulate the compound semiconductor industry and the electronic and optical device industry that now generate billions of dollars in annual revenue. The work he and his students did on gallium nitride and related materials now permeates defense and commercial applications.

Along the way he mentored an astonishing 125 PhD students, more than 40 master’s students, and 75 postdoctoral researchers; together they authored more than 600 publications. His students have made significant contributions and won international prizes by advancing the state of the art of molecular beam epitaxy, microwave transistors and circuits, and optical devices. Countless former students have gone on to great achievements, among them Donald Kerr, former director of Los Alamos Laboratories and principal deputy director of national intelligence; David Welch, cofounder of Infinera, Inc.; and 27 professors in the United States and abroad. Others hold positions in patent law, venture capital, the US government, and industry.

Dr. Eastman eagerly participated in numerous US and international research programs. He “kept contact with the outside world” as an exchange faculty member at Chalmers University in Sweden (1960–1961) and as a researcher at the Sarnoff Laboratories (1964–1965), MIT Lincoln Laboratories (1978–1979), and IBM Watson Research Laboratory (1985–1986). He assisted Sweden and Germany in establishing nanoscale facilities, and was an external PhD examiner for several European universities. During his career he totaled 111 trips to Europe.

Together with several other Cornell faculty colleagues, he cofounded, in 1967, the university’s National Science Foundation program on submicron structures, now the

National Nanofabrication Facility. In 1977 he was one of several founders, and then director for ten years, of Cornell’s Joint Services Electronics Program. He was also cofounder of Cayuga Associates, a company that produced impact ionization avalanche travel time (IMPATT), Gunn oscillators, and very early gallium arsenide field-effect transistors (GaAs FETs) with micron-size structures.

He provided leadership throughout the compound semiconductor field, through his and his students’ research and through his organization of conferences and workshops both at Cornell and around the world to disseminate information and inspire new research directions. In his honor, the Institute of Electrical and Electronics Engineers’ Biennial Conference on High-Performance Devices was renamed in 2002 the Lester Eastman Conference on High-Performance Devices. In June 2008 friends and colleagues honored him with a symposium, “Tubes to Transistors, Megahertz to Terahertz,” to celebrate his 60th year at Cornell.

Les received many awards and honors for his technical achievements. In addition to his election to the National Academy of Engineering in 1986, he received the 1991 Heinrich Welker Gold Medal and the Annual Award of the International Symposium on Gallium Arsenide and Related Compounds for outstanding research in the area of III-V compound semiconductors; the Alexander von Humboldt Senior Fellowship (1994); and the IEEE Aldert van der Ziel Award (1995), Third Millennium Medal (2000), and Electron Devices Society J.J. Ebers Award (2002). He was a fellow of the American Physical Society, Institute of Electrical and Electronics Engineers, and Electromagnetics Academy.

He served on the US Defense Department’s Advisory Group on Electron Devices (1978–1988) and as IEEE Electron Devices Society National Lecturer (1983). He was a member of the senior advisory board of the Fraunhofer Institute of Applied Physics.

As impressive as Dr. Eastman’s research accomplishments and activities are, he valued his educational contributions most of all. His love of his work and of people ideally suited

him to an instructional and mentoring role; he really shone as a teacher, and his legacy is apparent in both his classroom and graduate alumni. As an undergraduate electrical engineering student at Cornell, I had the privilege of taking courses in electromagnetic fields and waves from him. His straightforward, concise explication of complex issues in transmission lines, antennas, and propagation made this otherwise complex subject intuitive. He had a knack for understanding students’ misunderstandings and disentangling their confusion simply and clearly. He could bring out the best in his students, and in 2003 received the IEEE Microwave Theory and Technique Society Distinguished Educator Award in honor of his accomplishments as an educator.

Michael Spencer, Cornell professor and former Eastman student, recalls, “Most of us who had Les remember him best as a research advisor. He always had a really great grasp of the overall picture, and he could determine where the key innovations or challenges were and where to focus everybody’s energy and how to make the research group work as a team. I think that’s where his talent was,” Spencer says. “You could always come to his office at 8 o’clock in the morning, and he would give you a minilecture on the latest developments in compound semiconductors. It was almost like he was talking from a script. It was just a wonderful thing.”

Les Eastman was a bear of a man, a former football lineman in the Navy at Great Lakes basic training and again at Cornell; he could appear, at first, imposing. His drive and boundless enthusiasm may have been amplified by his athletic exploits. But his bright, sparkling blue eyes and perpetual smile belied his physique. All his students, undergraduate and graduate, found him to be approachable, encouraging, friendly, and engaging. He was an enthusiastic participant in electrical engineering’s Friday afternoon beer and snacks informal get-together for undergraduate and graduate students and faculty—an activity that did much to break down formal social barriers between traditionally stratified academic tiers.

Les was a man of many interests and a zest for life. He encouraged his students and family to maintain a healthy

balance of research, study, work, and outside activities. He loved art (especially that of the French Impressionists), the ballet, and all kinds of music. Whenever he could he set aside time during his travels to visit a museum, to attend the ballet, or to enjoy a classical music concert or jazz venue, often with students in tow. He also had an exceptional vocabulary, studying Latin in high school, then memorizing a page of Webster’s dictionary a day while he was in the Navy. He was passionate about sailing, particularly on Cayuga Lake, bringing along any family, students, or visitors he could corral into spending a few hours with him out on the water during the summer and fall. And finally, as he demonstrated through his enduring generosity and commitment to others, Les was a man of quiet but deep faith, regularly attending Sunday services and serving as a deacon for his church.

Les’ beloved wife of 64 years, Anne, also died in 2013. They are survived by their children David, Daniel, and Laurie; grandchildren Elizabeth, Evan, Jason, and Jonathan; and nine great-grandchildren.

Next: GERARD M. FAETH »
Memorial Tributes: Volume 19 Get This Book
×