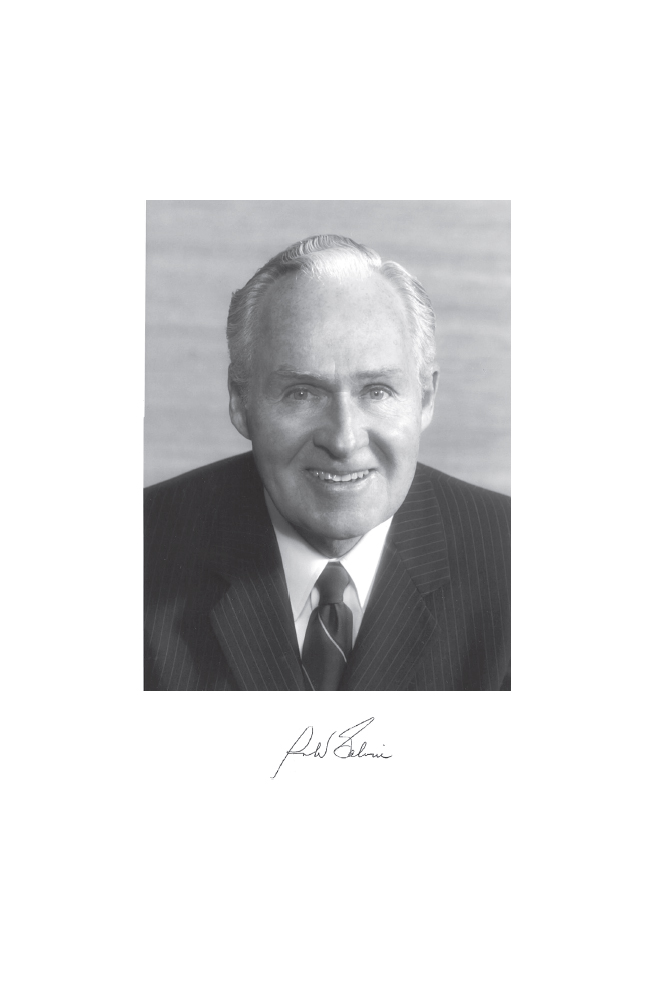 “For leadership in the commercialization of innovative electronics technologies, and for advancing the principles of Total Quality Management.”

ROBERT WILLIAM GALVIN, chief executive officer of Motorola and an instrumental leader in the development of the Six Sigma quality improvement system, died on October 11, 2011, at the age of 89 in Chicago.

Born on October 9, 1922, in Marshfield, Wisconsin, Galvin attended Evanston (Illinois) Township High School and the University of Notre Dame. In 1944 he began his 57-year tenure with Motorola, holding a variety of positions before becoming president in 1956 and CEO in 1959 after the death of his father, founder Paul V. Galvin. From 1959 to 1990, the company grew from $290 million to $10.8 billion in annual sales. In 1990 Bob retired as senior executive decision maker of Motorola but remained as chair of the board until 2001.

Galvin contributed to Motorola’s preeminence in other key industries as well. He created Motorola Semiconductors, which became one of the top suppliers of semiconductors in the world. Motorola Government Electronics, which had supplied communications equipment, including the WalkieTalkie, to the military since World War II, moved into the space age under his direction as the supplier of radios for all of NASA’s manned space flights. From automobile radios (the product family for which the company was ultimately named), public safety radios, and electronic pagers to televisions marketed under the company’s Quasar brand, Galvin helped make the Motorola name synonymous with innovation and public service.

During his tenure Motorola also expanded globally, moving successfully into Europe, Latin America, Southeast Asia, Israel, India, and Japan. And it was the first major US corporation to establish operations in China.

Galvin’s influence on business was felt beyond the technology sector. During his time at Motorola the company developed the Six Sigma quality improvement system, which had an impact on hundreds of corporations around the world. In 1988 the company received the inaugural Malcolm Baldrige National Quality Award for Manufacturing from the US Department of Commerce.

He was also proud of the company’s contributions to the development of a highly structured process for developing and tracking of technology roadmaps, a technique that became extremely popular and widely used both in companies and in government research organizations. As he said, “The fundamental purpose of the technology reviews and the technology roadmaps is to assure that we put in motion today what is necessary in order to have the right technology, processes, components, and experience in place to meet the future needs for products and services.”

Galvin took great pride in his employees, whom he encouraged to call him “Bob.” This familiarity and his focus on engineering led him to create various forms of special recognition including the Gold Badge, worn by engineers with more than

10 patents; the Science Advisory Board Associates and the Dan Noble Fellows, respectively recognizing roughly the top 1 and 0.1 percent of the engineering population; the Regular Management Technology Review sessions (RMTRs) that he personally attended to review the company’s technology roadmaps and various advances; and the elaborate Patent Awards Banquets held annually for each of the major business units.

Dennis Roberson, former Motorola executive vice president and chief technology officer, observed that “Bob viewed the technical community as the lifeblood of the company and recognized it accordingly. The Gold Badge was a particularly noteworthy example of this. These distinctive badges were worn with pride…and Bob would often single out the members of this elite community for special conversations on their area of technology prowess upon meeting them anywhere in the world.”

He was an advocate for respect, integrity, training, and fair pay in Motorola’s global management team, and he encouraged government leaders and policymakers to enact policies to foster business opportunities and economic growth in countries where US companies had operations. He also believed in continuous innovation even in well-established and profitable business units, and he institutionalized this belief at Motorola over his three decades of leadership. He liked to say “innovation is often the result of a minority of one.”

Galvin advised several US presidents and cabinet leaders, serving on the US Foreign Intelligence Advisory Board and on delegations for the offices of the US Trade Representative, State Department, and Defense and Intelligence. With some frequency, foreign leaders would land first in Chicago to meet with Bob before they flew to Washington to meet with the US president. As one colleague noted, “It was always amazing the level of access that a Motorola business card provided.”

Bob chaired the task force on Alternative Futures for the DOE Laboratories (the “Galvin Commission,” 1995) and cochaired the Commission on the Future of the National Science Foundation (1993), and in 1991 he was elected chairman of Sematech, a government initiative to revive the

country’s semiconductor competitiveness. He also served as president of the Electronic Industry Association and established the US Council on Competitiveness.

He founded two nonprofit think tanks during his retirement. The Galvin Electricity Initiative, now the Perfect Power Institute, aims to revitalize the electricity industry through development and demonstration of a microgrid-based perfect power system. The goal of the Galvin Transportation Initiative is to reduce automobile congestion in urban areas. Both initiatives seek to create 1 million permanent jobs in the United States over 50 years.

Bob was deeply committed to the Illinois Institute of Technology (IIT), a private, PhD-granting research university in Chicago. He joined its board of trustees in 1953 and served for more than 50 years, chairing it from 1979 to 1990. Under his leadership at Motorola, the company hired more than a thousand IIT graduates, many of whom went on to the highest levels of leadership in the company. In 1996, Galvin and Robert A. Pritzker each pledged $60 million as a challenge grant for the IIT capital campaign; their combined $120 million was one of the largest single gifts in higher education at the time. In spring 2011, the Robert W. Galvin Center for Electricity Innovation was established on the university’s campus.

Recognized worldwide for his vision and spirit of innovation, Galvin was honored with several major awards, including the National Medal of Technology and Innovation, the Vannevar Bush Award from the National Science Board, the French Legion of Honor medal, the Founders Medal from the Institute of Electrical and Electronics Engineers, and the Marconi Society Lifetime Achievement Award. In addition to the NAE he was elected to the American National Business Hall of Fame, and he was the recipient of several honorary doctorates from universities including IIT (1990).

He is survived by his wife of 67 years, Mary Barnes Galvin, daughters Gail and Dawn, sons Christopher and Michael, 14 grandchildren, and 14 great-grandchildren.

Next: JAMES P. GORDON »
Memorial Tributes: Volume 19 Get This Book
×