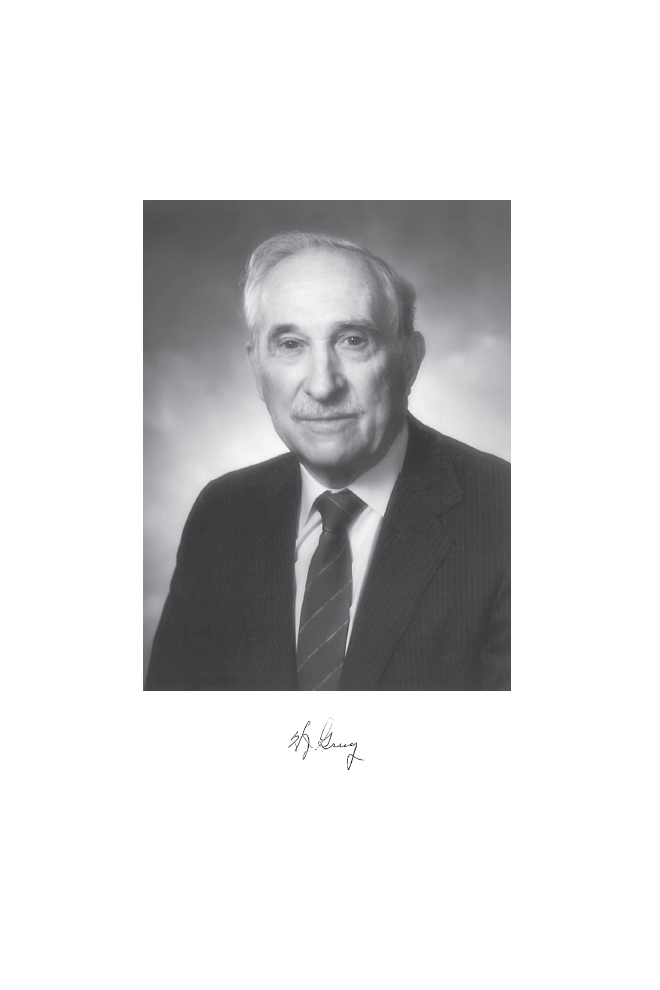 “For contributions in oil and gas evaluations and for leadership in the petroleum industry.”

BY LOUIS W. POWERS
SUBMITTED BY THE NAE HOME SECRETARY

Legendary petroleum engineer and geologist HENRY JONES GRUY rode off into the sunset for the last time on December 19, 2012, at age 97. He was born June 10, 1915, in Victoria, Texas, the only child of Bessie Jones Gruy and Henry Gruy, who emigrated from Austria in 1908.

Hank graduated from Central (now R.L. Paschal) High School, Fort Worth, in 1932 and went to work on his uncle Joe Gruy’s ranch in Hebbronville. He recalled the experience with fondness as it gave him a lifelong love of horses and riding—he was a regular on the Houston rodeo trail drives during the late 1970s and early 1980s.

When his uncle asked why he wasn’t going to college, Hank told him he had been accepted at Rice but couldn’t afford it. Joe said he’d pay if Hank would agree to go to Texas A&M. Hank graduated in 1937 with a bachelor’s degree in petroleum engineering.

After college he worked for Standard Oil of Texas and then Shell before joining the consulting firm of DeGolyer and MacNaughton from 1945 to 1950, when he set out on his own and founded H.J. Gruy and Associates, where he remained active until he was 95 years old. His company was a pioneer in the transition of engineering calculations from mechanical calculators to computers.

Hank loved serving as a technical expert in complicated oil and gas legal matters. He was called to testify before the Federal Power Commission and the Securities and Exchange Commission, and frequently also testified before state and district courts and the Texas Railroad Commission on various technical matters. He even prepared a paper on how to be a good technical expert and how to avoid being put down by opposing lawyers. He was proud to share his knowledge with younger engineers. He authored numerous technical and legal articles and papers, including one on the mystery of the Bermuda Triangle. He also testified for numerous foreign governments. In addition to his office in Dallas, he had offices in Houston, Corpus Christi, Washington, Monrovia, Beirut, and Bogotá.

Hank was an extremely fair man and so his employees were very loyal to him. When business was in a downturn the first salary cut was his, and on more than one occasion he took no salary so that he could pay his employees. He hired handicapped people long before there were rules or laws about this. And he was interested in hiring and training young engineers from countries all over the world, particularly those associated with the Austrian and Tunisian national oil companies.

Hank was passionate about his Austrian heritage and at some meetings spoke German. He also loved to tell stories, had a quip or a toast for any occasion, and could recite entire verses of poetry. One time he was on a trip to the Soviet Union in 1989 with the People to People Organization. Soviet-US relations were just beginning to thaw. The group had been delayed some 36 hours, partly by weather and partly by red tape. By 3:00 AM in a Moscow airport some of us were ready to bolt and head for the nearest route back to the good old USA. Hank began to recite poetry to the mostly sleeping and worn-out crowd, and at 3:30 AM we were all on a plane headed for Bugulma, in the Tatar Ural Mountain region, about 600 miles east of Moscow, for an 8:00 AM meeting. We landed about 5:30 AM. We were all dead tired but Hank carried on as if nothing had happened and the program went on as planned, with

the Russians all there in suits and ties and some wearing their World War II ribbons.

Hank earned many professional accolades. He was proudest of his induction into the National Academy of Engineering in 1989. He was a lifelong member of the Society of Petroleum Engineers (SPE) and served as its president in the 1960s. In 1983 he received SPE’s highest honor, the DeGolyer Distinguished Service Medal. He also received a Lifetime Achievement Award from the National Oil and Natural Gas Producers Association and the Great American Producer Award from the Independent Petroleum Association of America.

He was a member of numerous other industry organizations including the Society of Petroleum Evaluation Engineers (SPEE) since 1962 and the Houston-based Pioneer Oil Producers Society, which he served as president in the 1990s and whose monthly meetings he attended as long as his health permitted.

Hank was named a Distinguished Alumnus of Texas A&M University. He loved the university, which educated multiple generations of Gruys. In 2007 he and his wife dedicated the Rae T. and H.J. Gruy ’37 Fountain on the College Station campus outside the alumni building.

He was predeceased by his wife Rae T. Gruy, who died in May 2012, and former wives Evelyn Hudson Gruy (the mother of his three children) and Erma Bell Jopling Gruy. He is survived by sons Robert (wife Connie Hedrick) and William (wife Laura Holmes), daughter Janet Gruy Winter (husband George), and their children and grandchildren.

Next: CARL W. HALL »
Memorial Tributes: Volume 19 Get This Book
×