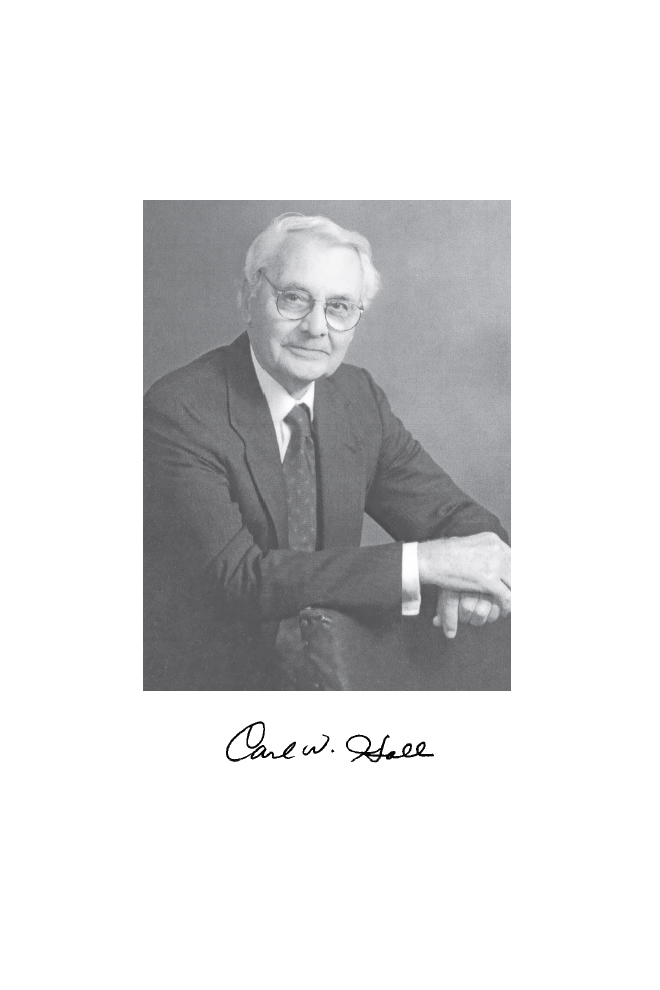 “For fundamental research in agricultural product processing and food engineering.”

BY PAUL J. HERER
SUBMITTED BY THE NAE HOME SECRETARY

He was born on November 16, 1924, in Seneca County, Ohio. As a staff sergeant in the 99th Infantry Division in World War II, he participated in three major campaigns, including the Battle of the Bulge, for which he was awarded the Bronze Star and the Combat Infantryman’s Badge.

From 1982 to 1990 Dr. Hall was deputy assistant director of engineering at the National Science Foundation. He provided leadership in implementing the 1985 reorganization of the

then newly established Directorate for Engineering, chairing a task force to develop and implement this plan. He also played a major role in the development of the foundation’s new Engineering Research Centers program. He worked with the White House, Congress, the National Academy of Sciences/National Academy of Engineering, and numerous groups at NSF to make the ERCs a viable program to strengthen US competitiveness through partnerships with industry in engineering research and education.

At the time, the program represented a new direction in the way NSF supported engineering education and research. Since then it has nurtured many new and emerging research fields and over 60 industry-university partnerships. For his leadership in formulating the program and guiding its implementation Dr. Hall received NSF’s Distinguished Service Award (1988).

Brahm Verma, of the University of Georgia, remembers Carl Hall as a champion of the role of biology in engineering education and research. At a 1987 meeting of agricultural engineering department heads from North America, Dr. Hall elaborated on “the age of biology”:

These visionary words started a movement that led to the establishment of the Institute of Biological Engineering (IBE), the first professional society with a vision of this discipline.

Also during his tenure at NSF he founded (in 1983) and became the first editor of Drying Technology: An International Journal. According to McGill University professor Arun Mujumdar, a pioneer in the field, Dr. Hall brought together an invaluable body of knowledge that had been scattered widely until the emergence of this journal. The journal has promoted international cooperation and attracted a large number of both young and seasoned researchers from diverse disciplines and

industrial sectors to conduct R&D in this challenging field. As energy costs rise and resources become scarcer, there is no doubt that R&D in this area will necessarily intensify in the future.

A prolific researcher, Dr. Hall authored, edited, or coedited 38 books and over 400 papers and presentations. He was honored by numerous national and international organizations. Among the awards he received are the Distinguished Faculty Award of Michigan State University (1963), Ohio State University’s Centennial Achievement Award (1970), and the University Distinguished Career Award from the University of Delaware (2006); France’s Ordre du Mérite (1979); Germany’s Max Eyth Medal (1979); the ASEE Centennial Achievement Award (1993); and designation by the National Society of Professional Engineers as Federal Engineer of the Year (1986).

Although very professionally accomplished, Carl was a gentle, unassuming, and caring person and his wise counsel and guidance benefited the careers of many young people. He was committed to finding creative ways to enable engineers to tackle society’s most important problems. We are truly grateful for the numerous contributions he made to engineering education, research, and professional service. He will be greatly missed.

He is survived by his wife of 64 years, Mildred; daughter Claudia Genuardi; three grandchildren; and six great-grandchildren.