Get This Book
Visit NAP.edu/10766 to get more information about this book, to buy it in print, or to download it as a free PDF.
« Previous: ELVIN R. HEIBERG III
Page 157 Share Cite
Suggested Citation:"WILLIAM C. HITTINGER." National Academy of Engineering. 2015. Memorial Tributes: Volume 19. Washington, DC: The National Academies Press. doi: 10.17226/21785.
× 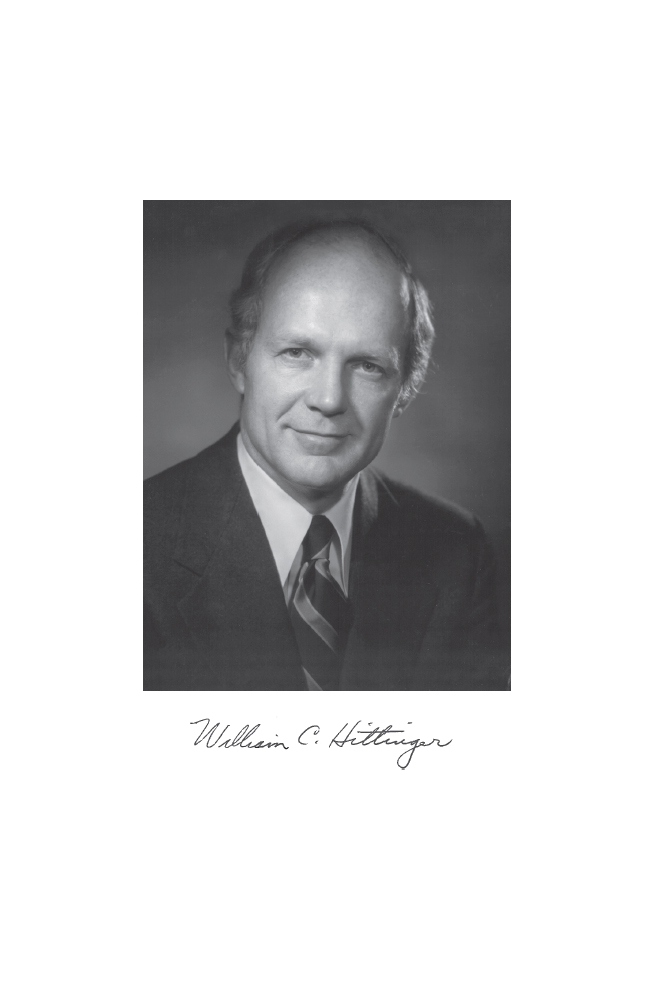 WILLIAM C. HITTINGER, a leader in the electronics industry and a former executive vice president of RCA Corp., died March 17, 2013, at the age of 90.

Born November 10, 1922, and raised in Bethlehem, Pennsylvania, he attended Liberty High School, enrolled at Lehigh University in 1940 as an advanced ROTC student, and graduated with honors in 1944 with a bachelor of science degree in metallurgical engineering. He played on the football and baseball teams and was one of the first recipients of an Alumni Student Grant financial aid award in recognition of his promise as an athlete-scholar and potential leader. His leadership and success are held as an example and aspiration for those who receive the award today.

In 1943 Bill went on active duty in the US Army and rose to the rank of captain. Upon his return from service in World War II, he took on a number of leadership positions and responsibilities in the booming electronics industry. He began at Western Electric Company as a materials engineer and moved on to the National Union Radio Corporation Semiconductor Division where, as production manager, he began focusing on semiconductors. In 1959 he was named director of Bell Telephone Laboratories Semiconductor Device Laboratory and in 1962

he became executive director of its Semiconductor Device and Electron Tube Division.

Hittinger was one of the pioneers in developing processing technology for silicon into semiconductor devices in the 1950s. In an oral history project through the Institute of Electrical and Electronics Engineers (IEEE) Global History Network, he spoke about making the transition to silicon as Bell Laboratories employees at Western Electric, where their mission was to drive new discoveries to commercial production:

We found a very receptive group of maybe a half a dozen well-trained semiconductor engineers who were willing to take on the job. It was just a matter of plain hard work, to get the area cleaned up to…be able to work with high-purity silicon, and before long Western Electric started to manufacture such a product…. Really, it was a matter of knowing the right people to work with, and Western Electric had…an able group of younger people.

In 1966 he was appointed president of Bellcomm, Inc., a company performing systems engineering for NASA’s manned spaceflight program under American Telephone and Telegraph Company and Western Electric Company. He was president of the General Instrument Corporation from 1968 to 1970, when he joined RCA as vice president and general manager of the Solid State Division. Appointed executive vice president in 1972, he assumed responsibility for RCA Consumer Electronics. In 1974 he was given the additional responsibility of Electronic Components (subsequently realigned into various product divisions) and elected to the RCA board of directors.

His oversight of research expanded in 1976 when he was appointed executive vice president of research and engineering for the RCA Corporation. In this post, he had direct responsibility for the company’s research and engineering activities, including the RCA Patent Operations and Laboratories at the Princeton headquarters, as well as international business and marketing development.

Bill provided much service to the nation, serving as a member of President Reagan’s National Security Telecommunications Advisory Committee from 1982 to 1986, the US-Brazil Presidential Committee on Science and Technology in 1987, and the board of the National Action Committee for Minorities in Engineering. In corporate governance, he was a director of UNC Inc., Biotechnic International, Stabler Companies, Bethlehem Steel, Thomas and Belts Corporation, Allen Bradley, Epitaxx Corporation, and American Fletcher Corporation.

An active and dedicated member of the NAE, he served on peer and awards committees for Electronics, Communication and Information Systems Engineering and served on and ultimately chaired the NAE Public Information Advisory Committee (1986–1993). He also served on the NRC Cross-Disciplinary Engineering Research Committee and the Committee for the Study of the Causes and Consequences of the Internationalization of US Manufacturing, which issued its report in 1990. He was a fellow of the Institute of Electrical and Electronics Engineers and the Royal Society of the Arts, and a member of Tau Beta Pi.

He devoted much of his energy to his alma mater, even coming out of retirement in 1997 to serve as Lehigh’s interim president for a year. He joined the university’s board of trustees in 1972 and served on a wide range of committees throughout his 24-year tenure (including 6 years as chair), distinguishing himself for his broad understanding of issues in higher education, his leadership qualities, and his ability to reconcile differences between factions. He is remembered for his effective leadership of the university board of trustees in overseeing the construction of the Zoellner Arts Center and enhancing the university’s support of student financial aid.

Always eager to share his knowledge, he lectured at Lehigh on the history of the electronic revolution of the mid-20th century, describing the transition from early materials work in germanium and silicon that were incorporated in a range of manufacturable products for industry, consumers, and the military after World War II. He received an honorary doctor of engineering degree from Lehigh in 1973 and was honored

with the “L-in-Life Award” from the Lehigh Club of New York for distinguished service to his alma mater and induction into the Lehigh Sports Hall of Fame for his contributions on and off the field.

Bill Hittinger was a warm and generous leader and a gracious role model and mentor to many. He left a meaningful legacy in the electronics industry, at Lehigh University, and in the National Academy of Engineering. His humble leadership style was evident in his dedication to his alma mater, where he was perhaps the only former president and board chair to sit at Lehigh’s front admissions desk as a volunteer whose warm welcome greeted prospective students and their families for years.

Always a loving and giving family man, Bill was also a friend and advisor to many in the community. After retiring in 1986, he spent his time in philanthropic pursuits, travel with his wife, visits with their children and grandchildren, and golf and tennis. He is survived by his wife of 68 years, Elizabeth, two sisters, four children, 11 grandchildren, and six great-grandchildren (and three more on the way as of this writing).

Next: CHARLES H. HOLLEY »
Memorial Tributes: Volume 19 Get This Book
×