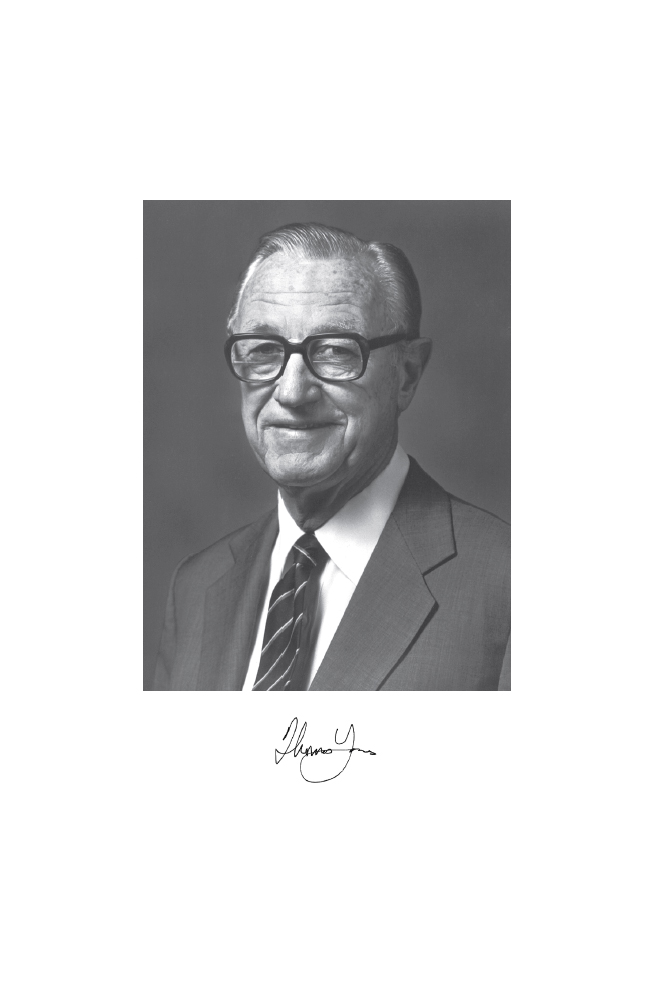 “For leadership in the introduction of reliability and maintainability into advanced aircraft design, resulting in systems which combine high performance with unprecedented reliability.”

THOMAS VICTOR JONES, former Northrop Corporation chairman, chief executive officer, and president who led the company to the top tier of the defense industry, died on January 7, 2014, at age 93.

He is remembered as among the last of the true mavericks whose names became synonymous with their corporations, a bold visionary who took daring risks and whose commitment to innovation ignited a transition that both significantly grew the company and influenced the direction of the Cold War. His vision lived in his company’s innovative aircraft, many of which continue to protect and project freedom around the world.

He began his career in 1941 as an engineer with Douglas Aircraft Company and remained there until 1947, when he began work for the Brazilian government as technical advisor to the Air Ministry in Rio de Janeiro. At the same time, he held

the post of professor and department head at the Aeronautical Institute of Technology of Brazil.

In 1951 he joined the staff of the Rand Corporation, scientific advisors to the US Air Force and other entities. While there he directed and wrote a widely used logistical study, Capabilities and Operating Cost of Possible Future Transport Airplanes (Rand Report R-249, 1953).

He joined Northrop in 1953 as assistant to the chief engineer, and his progress to the top of the company was swift. In 1958 he was named senior vice president for development planning and he was elected president of the company in 1959, chief executive officer in 1960, and chair of the board in 1963. He served in all three leadership capacities until 1975 and retired in 1990. During those 37 years he nurtured and grew a solid but relatively small manufacturer of tactical fighter aircraft into a company involved in key national strategic and tactical defense programs, holding a prominent position in several market areas. From 1959 to 1988, company sales grew from $263 million to $5.8 billion. Along the way, Tom graced the cover of Time magazine and counted world leaders and other giants of industry as colleagues and friends.

A hallmark of Tom’s approach was to commit company funds to the resources necessary to deliver advanced-technology products that combined capability, quality, reliability, and economy. During the 1980s alone, Northrop invested more than $2.5 billion in facilities and equipment to achieve increases in productivity, set new standards of quality, and reduce costs to customers. The company’s success during his tenure and beyond speaks for itself. Among the numerous significant developments he oversaw were the following aircraft:

In addition to his full-time Northrop responsibilities, Tom was a member of the board of governors of the Aerospace Industries Association until 1989, served as its chairman in 1985, and in 1990 was appointed a member of the honorary advisory committee to the board of governors. He was an honorary fellow of the American Institute of Aeronautics and Astronautics and in 1985 received its Reed Aeronautics Award, the institute’s highest honor. He was elected to the National Academy of Engineering in 1986, and the National Aeronautic Association awarded him the Wright Brothers Memorial Trophy in 1989. He served as a director of the Los Angeles World Affairs Council and was among the founders of the Music Center of Los Angeles County. He also belonged to the California Round Table and the Nature Conservancy of California.

Tom’s retirement in September 1990 brought to a close a remarkable, even legendary, career. He reached heights and achieved results others could not have accomplished given

twice the time. He could have retreated into retirement and lived his life quietly had he wished. For him, though, retirement simply meant striving to succeed in another area of interest, and, true to form, he did. In 1959 he had purchased a home in the Bel Air section of Los Angeles that had belonged to Victor Fleming, director of Gone with the Wind and The Wizard of Oz. Upon leaving the company he had nurtured and grown, Tom turned his attention to the grapes he had begun planting in 1978 and developed the highly regarded Moraga Vineyards wines, thus achieving success in a “second career” that he loved.

Tom Jones achieved a full life well lived. Whether he was transforming a company or developing wines, he accomplished great things by committing, nurturing, and growing. His influence on aerospace and defense is permanent; the aircraft he championed have protected people in all corners of the world and directly influenced future generations of highly sophisticated systems. Today, the company he helmed is creating products he could only have dreamed of, but they would not have been possible without him.

Next: DANIEL D. JOSEPH »
Memorial Tributes: Volume 19 Get This Book
×