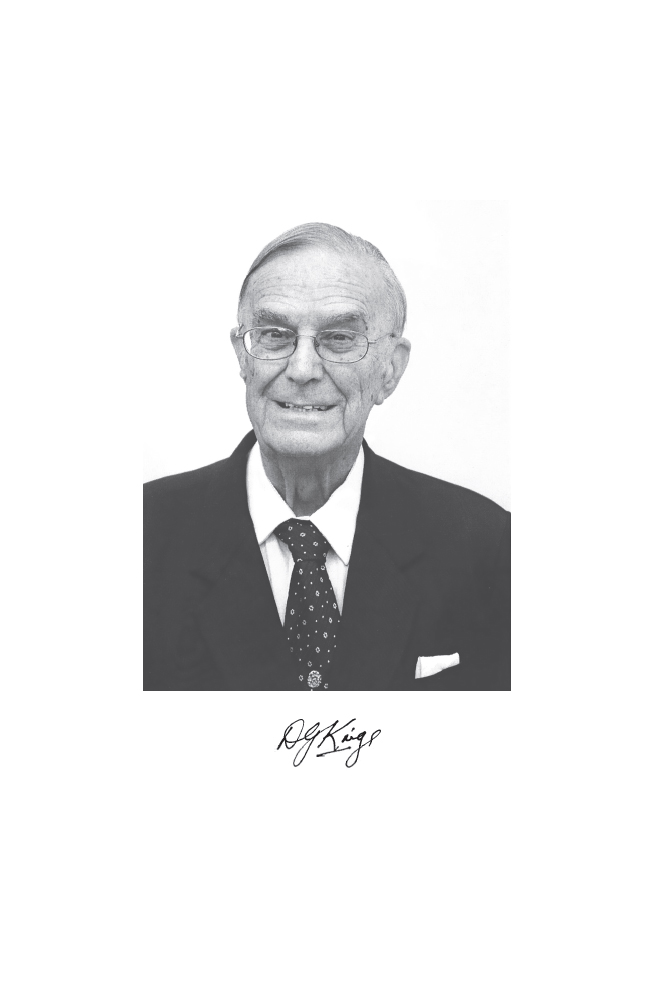 “For development of statistical methods and their application to resource valuation.”

In a professional career spanning more than seven decades and punctuated with significant achievements, Krige made fundamental contributions to the art and science of orebody evaluation very early in his career, revolutionizing the application of statistical techniques to this important area. For his pioneering contributions he was elected to the National Academy of Engineering in 2010, the first person from not only South Africa but the African continent.

Danie was born August 26, 1919, in Bothaville, Orange Free State (OFS), South Africa. At the age of 19 he graduated from the University of the Witwatersrand (Wits) with a bachelor’s degree in mining engineering. From 1938 to 1943 he worked for the Anglovaal Group in its gold mines, gaining valuable practical experience in surveying, sampling, and ore valuation. This was followed by an appointment on the technical

staff of the Government Mine Engineer’s Department, where his responsibilities included uranium price negotiations with the British and American authorities and the handling of lease applications in the OFS and Klerksdorp gold fields.

His experience led to his concern that decisions of critical importance were being made on a limited number of drill hole samples without sound scientific analysis of the risks of failure. He therefore began research on the development of statistical methods and their application to resource evaluation. His early work concentrated on improving the solutions of mine valuation problems on the Rand from values at sampled locations using specialized statistical techniques.

In 1951 he was awarded an MSc in engineering from the Wits for his research on the application of mathematical statistics to ore evaluation. His work laid the foundation for important mining industry sampling and estimation concepts such as sample support, spatial structure, weighted moving averages, selective mining units, and ore tonnage curves. His early papers were translated into French and led to a worldwide interest in the adoption of new techniques to increase the efficacy of reserve estimation.

In 1952 he returned to Anglovaal as financial engineer, with responsibility for ore evaluations, mining projects, financial and share valuations, and technical computing facilities. He made outstanding contributions in a number of areas, particularly financial risk analysis in mine investment and the role of mine taxation on industry development.

His research into ore evaluation continued mainly in practical applications. He carried his message to all the major mining districts of the world with lots of case studies, making converts in many countries. His early work also expanded into the new field of geostatistics, the application of statistics to the study of spatial correlation and spatial extrapolation in earth sciences, particularly geology. In 1963 he received a DSc from the Wits.

In recognition of his contribution to the emerging field, in 1963 the interpolation technique in geostatistics in which the surrounding measured values are weighted to derive a predicted value for an unmeasured location was dubbed Kriging

Danie retired from Anglovaal in 1981 and joined the Wits Mining Engineering Department, where he taught and researched on geostatistics and mineral economics. The next ten years saw him direct students from around the world to graduate degrees, blending words of wise counsel and guidance with words of caution and correction, always with love and encouragement.

From 1991 until a short time before his demise, he remained active as a highly sought after mining consultant for ore evaluation and financial analysis for several South African and international mining and consulting companies.

He was repeatedly honored by his beloved South Africa as a great ambassador for the country. In 1989 he was recognized by the South African president with the Order for Meritorious Service Class 1 Gold medal, and again in 2012 with the Order of the Baobab (Silver) for exceptional and distinguished contributions in business and the economy, science, medicine, and technological innovation and community service.

Danie was active in many technical and professional societies in South Africa, both in the trenches and in leadership roles. As a professional engineer, he served for many years on the mining committee of the Engineering Council of South Africa. He was elected an honorary life member of the South African Institute of Mining and Metallurgy, which he served as a treasurer for an extended period of time and from which he received several honors: gold medals in 1980 and 1996, silver medals in 1979 and 1993, and the highest award, the Brigadier Stokes Memorial Award (a platinum medal), in 1984. In 1982 the South African Akademie vir Wetenskap en Kuns gave him the Gold Medal for Scientific and Technical Achievements.

He was also the recipient of several major international awards. He was a founding member of the International Association of Mathematical Geology, which awarded him the William Christian Krumbein Medal in 1984 and called him the “father of mathematical mining geology.” In 1987 the Society for Mining, Metallurgy, and Exploration honored him with the prestigious Daniel C. Jackling Award and in 1988 made him a Distinguished Member, the first South African to receive these recognitions.

Danie was a constant presence at the symposia on the Application of Computers and Operations Research in the Mineral Industries (APCOM) and represented South Africa on the APCOM International Council. A positive voice for expanding both the council and international participation, he was the first elected council chair who was not from the United States. He was awarded the APCOM Distinguished Achievement Award in 1989.

Danie was a most prolific author, with over 100 publications in leading journals, symposium proceedings, and handbooks. His monograph on the Lognormal–de Wijsian Geostatistics for Ore Evaluation (South African Institute of Mining and Metallurgy, 1981) is an excellent overview of early statistical developments, the three-parameter lognormal distribution, and later developments in geostatistics.

To appreciate Danie Krige merely as a great mining engineer and an expert geostatistician would be a disservice to a great man. He was brilliant and famous yet very humble, caring, and approachable. His simplicity left a deep impression on all—colleagues, friends, and students—who came to know him, and all loved and respected the man. I met him in 1968, when he was already a giant in the field, and several times after that, the last time in 2010. After each meeting, I came away with a sense that he was investing in me, challenging me with new ideas and with a desire that I succeed.

Till his last breath, Danie was devoted to every one of his passions—Ansie and their children, his friends and students, the mining industry, South Africa, and APCOM. We will miss his physical presence, but will have his legacy for all time.

Next: DAVID M. LEDERMAN »
Memorial Tributes: Volume 19 Get This Book
×