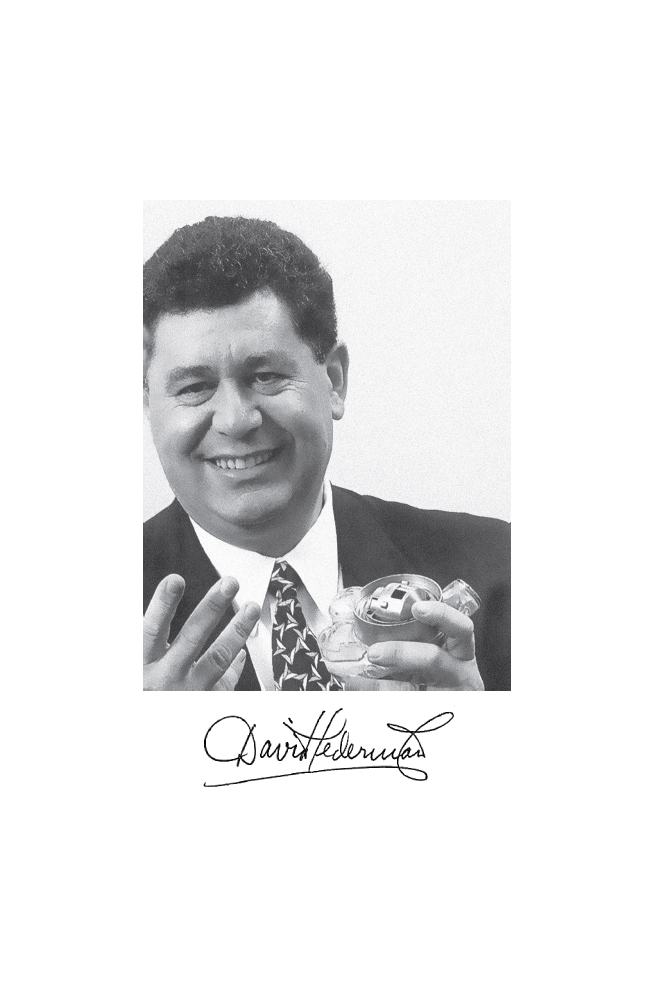 “For designing, developing, and commercializing heart failure assist and heart replacement devices, and for leadership in engineering science education.”

DAVID M. LEDERMAN, a brilliant engineer, entrepreneur, friend, and family man, who created the environment for and led the development of the first fully implantable artificial heart (TAH), died on August 15, 2012, at his home in Marblehead, Massachusetts, at the young age of 68.

Working with Robert T.V. Kung and Param Singh, David set out to design and develop a fully implantable TAH, the AbioCor, which became a scientific and engineering phenomenon. The requirements for the AbioCor are analogous to the complexity of submerging an unmanned, unprogramed submarine that travels around the world and returns to the same location some years later without any outside help.

Twenty years after their quest began, a patient lived with the AbioCor for 17 months in central Kentucky. Surgeons Laman Gray and Robert Dowling implanted the AbioCor and treated Tom Christerson, who had less than a month to live when he received the device. Gray deemed the AbioCor the most sophisticated device ever implanted in a human being.

David Mordechai Lederman was born in Bogotá, Colombia, on May 26, 1944. His parents, Rifka and Israel Joseph Lederman, had emigrated from Poland to escape the Nazis. David was educated at the Colegio Americano and then studied at the Universidad de los Andes, both in Bogotá.

In 1964 he moved to the United States to study engineering physics at Cornell University. He received degrees simultaneously from both Cornell and the Universidad de los Andes in Bogotá in 1966 and went on to earn a master’s degree in aerospace engineering and a PhD in laser physics/aerospace engineering from Cornell. He returned to Colombia to become an associate professor and director of biomedical research at the Universidad de los Andes. In 1974 he came back to the United States to work for Avco Everett Research Laboratory in Boston, where he worked on cardiac assist technology. He was hired as a senior research scientist and in 1979 was named chair of the Medical Research Committee.

We met in the late 1970s when I was chief of the Devices and Technology Branch of the National Heart, Lung, and Blood Institute (NHLBI). The institute’s policy was to conduct site visits with research contractors, such as Avco, on a regular basis; David and I met during one such visit. It was obvious that he held the respect of his colleagues and was dedicated to leading the team to create innovative solutions for treating heart failure. We quickly became professional friends.

A few years later, on a crisp morning in 1981, we were walking around the footings of a new construction site in the Danvers (MA) Business Park. David was starting the federal contract novation process to transfer the Avco cardiac assist program to his new company, Abiomed. The site visit was to ensure that the new entity had the facilities, financial systems, personnel, intellectual property, and equipment to complete the research projects funded by the NHLBI. It was clear that David was not only an outstanding engineer but also a natural businessman who could complete the novation process and make Abiomed a success.

A remarkable turn of events occurred in the late 1980s. Based on the recommendations of outside experts, in January 1988 the NHLBI awarded contracts worth more than $22 million to four research groups to continue research and development of the TAH. Four months later, the NHLBI announced that support for developing and integrating systems for a TAH would

be suspended as of September. The director, Claude Lenfant, stated in a New York Times editorial that “The human body just couldn’t seem to tolerate it.” The decision was based on the experience of Barney Clark and four other patients implanted with a tethered TAH rather than a fully implanted artificial heart.

David contended that this decision was based on outdated technology and conveyed a well-supported vision for the future of the technology, with continued public funding, to Senator Edward Kennedy (D-MA). Soon Senators Orrin Hatch (R-UT), ranking Republican on the Senate committee that approved NIH authorizations, and Kennedy, chair of the committee, were working together to suggest to the NIH that it was premature to eliminate the expert clinical, engineering, and technological capacity needed to develop an implantable TAH.

Senator Hatch, with the backing of Senator Kennedy, drafted legislation that would require NIH to fulfill existing contracts, such as those supporting the TAH development, before starting any new programs. The American Heart Association and the American College of Cardiology also voiced concern and requested that the TAH program be restored because of the clinical need. Based on David’s reasoned assessment, the input of the clinical community, and the efforts of Congress, the TAH research contracts were restored by the end of 1988. This funding provided the support needed for the AbioCor design.

Although only 15 patients received the AbioCor, thousands of heart failure patients have benefitted from the innovative technologies that Abiomed has created to assist and replace the cardiac function of the heart—in 2012 more than 2,000 heart failure patients received a ventricular assist system. As a result of David’s contributions, many of these patients will live 10 meaningful years—or longer—with their medical implant.

David was quick to share his research and business experience, and published and lectured on many aspects of implantable medical device science and engineering. He also served

on advisory boards at Cornell and the University of California at San Diego.

He had many happy moments with friends and family. He had compassion for all, sometimes even putting their health above his own. At his funeral at Chabad of the North Shore in Swampscott, he was remembered as a great scientist/engineer, and as a humanitarian who funded a summer camp north of Boston for Israeli children from the town of Sderot when it was being shelled by rockets from Gaza.

“He had integrity, honesty, and compassion, all wrapped up in one very intelligent person,” said Dr. Kung, who met Lederman at Cornell. “I think he went too early, but he left his legacy. He touched many, many people’s lives.”

He is survived by his wife of 45 years, the former Natalie Hirsch, son Jonathan and daughter Jeanine Goodwin, 10 grandchildren, sister Pearl Awenstern, and brothers Max and Benjamin.

Next: TINGYE LI »
Memorial Tributes: Volume 19 Get This Book
×