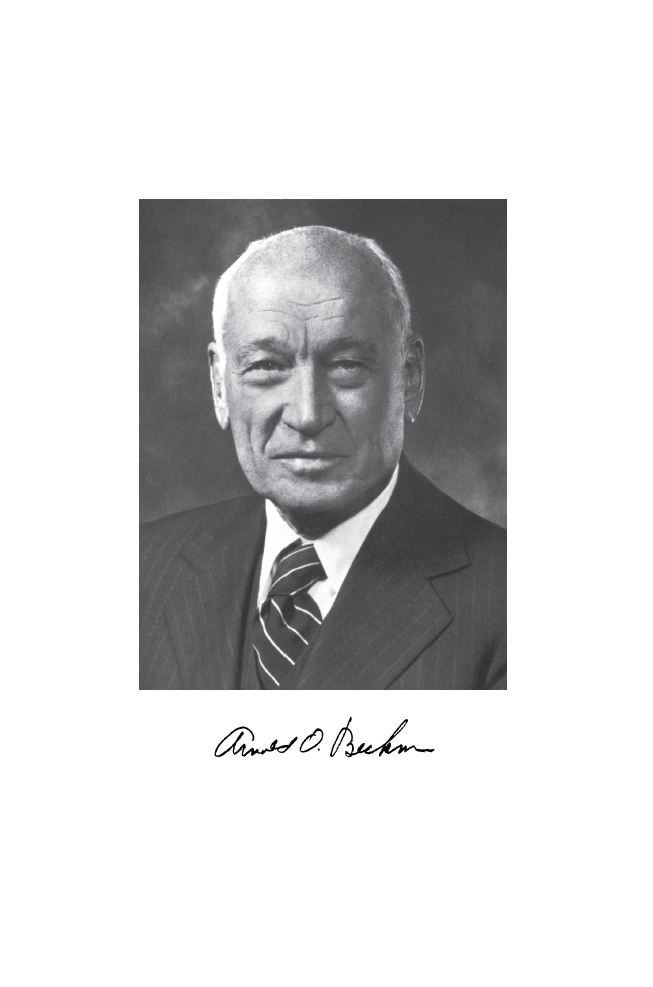 “Invention and development of precision instruments.”

ARNOLD ORVILLE BECKMAN, scientist, inventor, founder of Beckman Instruments, and philanthropist, died in La Jolla on May 18, 2004, at the age of 104.

He was born on April 10, 1900, the oldest of four children (three boys and a girl) in Cullom, Illinois, a village of 500 individuals. His father was the local blacksmith, and Arnold grew up fascinated with mechanisms, devising some of his own during his youth. He read avidly and when he was 9, after finishing many of the family books, he found a copy of Steele’s Fourteen Weeks in Chemistry. He began to read, and fell under its spell, a spell that was to last a lifetime. He soon had his own chemistry lab, using ingredients readily available from the druggist; he made some of the apparatus, and relatives supplied more complicated items. He also learned to play the piano under his mother’s tutelage, and became accomplished enough to play for the local cinema, which of course showed the silent movies of the day.

Arnold’s mother died when he was 12, and after he passed an examination admitting him to University High School in Normal, Illinois, his father moved the family there. He mastered chemistry quickly, and when he graduated as valedictorian had completed 2½ years of college chemistry at Illinois State Normal University. He joined the Marines and, while

stationed at the Brooklyn Navy Yard, met Mabel Meinzer, who a few years later became his wife. In the meantime he returned to Illinois too late to enroll in college and so took a trip to the West, where he played piano at the theater in Ashton, Idaho, and stayed at the owner’s home. Thus began his love of the western United States.

That fall he returned home to study chemistry at the University of Illinois, where he distinguished himself as an undergraduate and also took his master’s degree, both in 1922. He wanted to pursue his PhD at another school, and applied to the University of Chicago, MIT, and Caltech. He was admitted to all three and, in part because Richard Tolman had left Illinois for Caltech after Arnold became a student there, decided on Caltech. He did well, liked the Institute, but also longed to be nearer Mabel Meinzer, so in 1924 he dropped out of Caltech, went to New York, and got a job at Western Electric Engineering, in a group that soon became Bell Labs. He learned about vacuum tube electronics as well as manufacturing and quality control. He also saw a good deal of Mabel, and they were married in 1925. In the summer of 1926 they headed west so Arnold could finish his PhD in chemistry at Caltech. In 1928, with that accomplished, he was asked to join the Caltech faculty, and did. In a few years he was in charge of freshman chemistry and renowned as both a teacher and an instrument and apparatus designer at the institute.

He concurrently became an expert witness in lawsuits and a consultant to industry on a variety of scientific problems. For example, to overcome ink clogging in postal meters, he devised a new ink in which the pigment would not settle out. And when a friend asked him to devise a more quantitative way to measure acidity, he developed the pH meter.

He also formed the National Technical Laboratory to develop his inventions. The pH meter was developed into a portable device that was first shown at the American Chemical Society annual meeting in San Francisco in 1935. After it evoked much interest there, he was able to market it, and started what later became the very successful Beckman Instruments Company. Among the company’s early instruments was a

spectrophotometer, which evolved through several models. The most successful early model, the DU spectrophotometer, was described by one Nobel Laureate as probably the most important instrument ever developed toward the advancement of bioscience. More than 21,000 units were sold between its introduction in 1942 and 1964, when it was discontinued for newer models. It played a crucial role in the development of penicillin, vitamins, TNT, synthetic rubber, and many other important compounds.

Beckman was also called upon for numerous developments during World War II; the helipot that increased the accuracy of a variable resistor by a factor of 10 is one example that he was personally involved in developing.

He had a pioneering involvement with the California Institute of Technology. After leaving the faculty in 1939 to be engaged full-time in his company, he remained close to faculty and the Institute. He was the first Caltech graduate to be elected to the board of trustees (in 1953) and then became the first graduate to chair the board (1964–1974).

He and Mabel provided the funding to establish Beckman Auditorium in 1964, Beckman Laboratories of Behavior Biology in 1974, the Beckman Laboratory of Chemical Synthesis in 1986, and in 1989 the Beckman Institute to further interdisciplinary work between chemistry and biology. In recognition of his many contributions to the Institute, Caltech trustees and other friends established the Arnold O. Beckman Professorship in Chemistry, currently held by Harry Gray, founding director of the Beckman Institute.

Arnold Beckman believed in science and engineering education and research, and through the Arnold and Mabel Beckman Foundation the Beckmans gave more than $400 million to philanthropy, primarily toward scientific endeavors in higher education—more than 200 young investigators and 400 young scholars have been funded. In addition to their gifts to Caltech, they provided funds for the Beckman Institute for Advanced Science and Technology at the University of Illinois at Urbana-Champaign, the Beckman Research Institute at the City of Hope, the Beckman Center for Molecular and Genetic

Medicine at Stanford University, and the Beckman Laser Institute at the University of California, Irvine. There are many other contributions that might be named, but especially in this tribute, the Arnold and Mabel Beckman Center of the National Academies of Sciences and Engineering in Irvine should be noted.

Arnold Beckman was a leader in many areas of life, from science and engineering to creative invention, service to education, and philanthropy. His influence was felt not only because he accomplished so much but because of the person

he was, and perhaps the best way to convey that is to list his “seven rules for success”:

He lived by these rules his entire life, which spanned the twentieth century. He saw science and technology develop to its present-day state, and his contributions enabled much of that development.

Next: AMAR G. BOSE »
Memorial Tributes: Volume 19 Get This Book
×