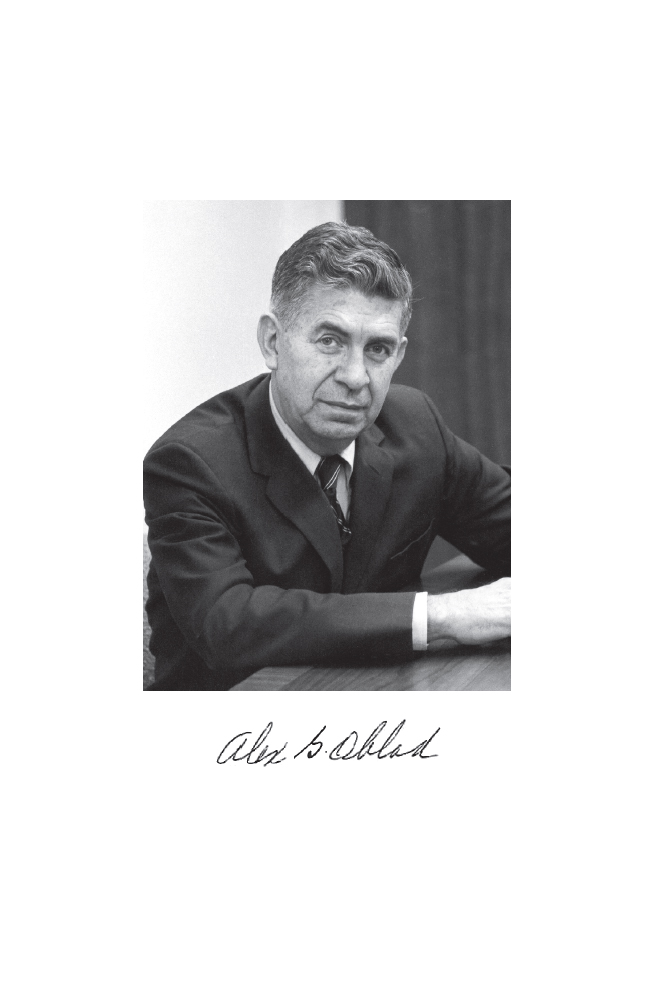 “Leadership in the development of important commercial hydrocarbon and petrochemical processes.”

BY BURTRON H. DAVIS AND HAYWARD B. OBLAD
SUBMITTED BY THE NAE HOME SECRETARY

ALEX GOLDEN OBLAD, an authority in the catalytic chemistry of petroleum refining and petrochemical production, died on September 19, 2000, at age 90. He began as a research chemist at Standard Oil (Indiana) and Magnolia Oil (Texas), and progressed to associate director of R&D at Houdry Process Corp. (Pennsylvania) and vice president of R&D at the M.W. Kellogg Co. in New York City. Later he was distinguished professor and dean at the University of Utah.

Alex was born in Salt Lake City on November 26, 1909, the second child of five born to Alexander Hugo and Louie May Oblad. He was salutatorian of his class at East High School and then, contrary to his father’s wishes, entered the University of Utah to study physics, working his way through college playing the clarinet and saxophone in jazz bands. Seeing that chemists had better job prospects, he switched majors and earned a BA in chemistry with a minor in physics in 1933 and an MA in physical chemistry in 1934. He then accepted a fellowship at Purdue University, where he studied supercooled glycerol, a glassy material, with Roy F. Newton. His now proud parents traveled all the way to Indiana to watch their humble but enterprising son receive his PhD in chemistry in 1937.

The Standard Oil Co., a leader in thermal cracking of petroleum, immediately hired this bright young chemist to help

compete in the superior catalytic cracking process developed by Eugene J. Houdry. At the refinery lab in Whiting, Indiana, Alex began quantifying the thermodynamics of many beneficial hydrocarbon reactions, preceding the major effort begun in 1942 under the auspices of Project 44 of the American Petroleum Institute. He also formulated catalysts for naphtha reforming to produce high-octane gasoline. This was groundbreaking chemistry for there was very little in the literature on it before 1940.

Alex demonstrated phenomenal results using platinum on a ceramic matrix, but was directed by his supervisor, Ernest W. Thiele, to find a less expensive metal. He settled on silica-alumina and chromia, the catalyst that Standard used in its subsequent commercial reforming process. Coke formation deactivated the catalyst over time; using model compounds, Alex showed why and proposed operating under 100–250 psi of hydrogen pressure, an approach that prevented deactivation and greatly prolonged catalyst performance. Catalytic reforming produces toluene, the precursor of TNT and a critical component of aviation fuel for military aircraft. Alex filed for a patent on an integrated toluene process in 1940, but his work was kept secret during World War II; the patent (US 2383072) was finally issued on August 21, 1945, one week after V-J Day. Alex also developed a “super” distillation column with 200 theoretical plates, a very high number for the time. He used a similar device in his toluene production process, a forerunner to the gas chromatograph.

In his lab Alex built a glass standpipe to handle his inventory of fine catalyst. The device was about 30 feet tall, with interior tuyeres in the tapered bottom and a rubber hose and clamp. One day some engineers stopped in and asked him to explain

and demonstrate it. He opened the air valve to the tuyeres that fluidized the particles and drained some, like water, into a beaker. The engineers huddled in quiet conversation and soon after patented a fluidized-bed cat-cracking process. Alex also worked on the chemistry of a synthetic silica-alumina cracking catalyst at Standard of Indiana and later in much greater depth at Houdry.

He left Standard Oil in 1942 to become chief of chemical research at Magnolia Petroleum Co., owned by Socony-Vacuum Oil. Here he pioneered the use of homogeneous acid catalysts, especially AlCl3 and AlBr3, to polymerize alkenes. One of the products he formulated was a completely synthetic lubricant that excelled in test engines. The Socony-Vacuum managers failed to see the value of polymers, so they furloughed the staff and closed the lab, but offered Oblad a position in Paulsboro, New Jersey. Alex refused it and joined the Texas Research Foundation as head of industrial research.

Not long afterward he was personally visited and recruited by Chalmer G. Kirkbride, president of Houdry Process Corp. of Marcus Hook, Pennsylvania, and in 1947 he accepted the position of associate director of R&D in the company’s lab in Linwood, PA. In 1950 his team at Houdry published their work on the structure, composition, and powerful acidic action of the metal oxide sites in highly porous cracking catalysts.

Alex maintained ties with faculty members at the University of Utah and published results with them on the dynamic mechanisms of heterogeneous catalysis and of anion/cation exchange in the early 1950s. In support of the Houdriforming® process, he coauthored a paper in 1953 with G. Alexander Mills, Heinz Heinemann, and Thomas H. Milliken that unveiled the mechanism of bifunctional catalysis.1 In this stepwise reaction the dehydrogenating/hydrogenating metal forms a reactive intermediate, alkene, which diffuses to the other catalyst function, the acid site, and isomerizes to a higher-octane-value

product before diffusing back to the metallic function to rehydrogenate and stabilize. They also explained how cycloalkanes became aromatics. This paper stimulated hundreds of studies to define these reactions more completely, and remains a classic and seminal publication in catalysis today. Oblad also published progress with coworkers in 1955 on the Houdresid® hydrocracking process for upgrading low-value residua. In 1955 and 1972 he penned benchmark reviews of catalysis for the Oil and Gas Journal.

In 1957 he joined the much larger M.W. Kellogg Company as vice president of R&D. Under his able management and direction, Kel-Chlor®, the Kellogg Milli-Second Furnace®, the Orthoflow®, steam cracking and steam reforming of hydrocarbons, synthetic ethanol and methanol, and other important processes were developed or improved.

He received the E.V. Murphree Award in Industrial and Engineering Chemistry in 1969 and the American Institute of Chemists’ Chemical Pioneer Award in 1972. The Kellogg ammonia process to which he contributed now accounts for a large portion of the world’s enormous fertilizer capacity, and in 1967 the company was honored with the Kirkpatrick Chemical Engineering Achievement Award for its development of synthetic ammonia and other critical industrial chemical technologies. In 1972, after Nixon’s historic trip to China, Kellogg received perhaps its greatest reward when the country placed consecutive orders for Kellogg ammonia plants. Alex felt honored to have played a small role in helping to feed billions of people worldwide.

In 1969, after more than 32 years in industry, Alex returned to the University of Utah as a Distinguished Professor to develop advanced processes to exploit the state’s abundant oil sands, coal, and shale oil deposits. He helped secure several very large research contracts from the Department of Energy and led the university to become highly regarded in fossil energy research. He was acting dean of the College of Mines and Earth Sciences from 1972 to 1975 and in 1989 was elevated to dean emeritus, a title he never sought. He retired in 1995 after 26 years in academia.

Among his many honors he received the Purdue Chemist Award (1959) and honorary doctorates from Utah and Purdue. He was a Distinguished Alumnus of Utah (1962) and Purdue, served on the advisory councils of Utah and Dixie State Universities, and was a member of the Brigham Young University Management Society, which founded the Marriott School of Management and funded the construction of its building. He served as secretary, chair, and managing editor of preprints of the American Chemical Society Division of Petroleum Chemistry (1951–1969) and was an ACS member for more than 60 years. He was also a member of the American Institute of Chemical Engineers (AIChE), the Faraday Society, AACS, and the International Congress of Catalysis, a founder of the Philadelphia Catalysis Club (predecessor of the North American Catalysis Society and the International Congress on Catalysis) and Rocky Mountain Fuel Society, and an active participant in the Gordon Conferences.

Alex always developed productive relationships with colleagues and students. He was modest in the extreme, considered others friends and peers, and consistently recognized their contributions and achievements. Though calm and affable in his demeanor, he always stimulated scientific competition and encouraged excellence. Above all, he was open to opinions that differed from his own. His aim was to help the work and others progress and he was gratified when they succeeded. For this he was and still is respected, honored, and loved.

As an undergraduate, while playing in a band in Escalante, Utah, he met Bessie Elizabeth Baker, whom he married on February 23, 1933. They reared six children who all hold degrees from the University of Utah, and Alex became a grandfather of 23 and great-grandfather to about 40. He was devoted to his family, his work, his alma maters, and the Church of Jesus Christ of Latter-day Saints. He died in his sleep and was buried in Salt Lake City.

Next: JOSEPH PENZIEN »
Memorial Tributes: Volume 19 Get This Book
×