Get This Book
Visit NAP.edu/10766 to get more information about this book, to buy it in print, or to download it as a free PDF.
« Previous: THEODORE ROCKWELL
Page 269 Share Cite
Suggested Citation:"REUEL SHINNAR." National Academy of Engineering. 2015. Memorial Tributes: Volume 19. Washington, DC: The National Academies Press. doi: 10.17226/21785.
× 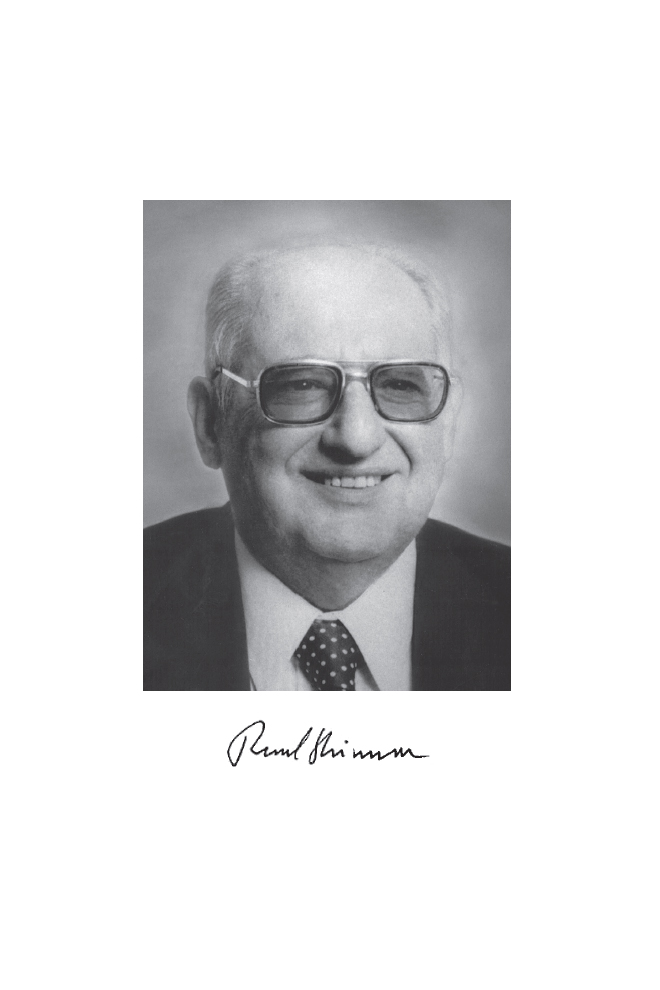 “For the breadth and quality of his research in reactor design, control theory, chemical kinetics, statistical analysis, and process economics.”

With the passing of REUEL SHINNAR on August 19, 2011, at the age of 87, the engineering community lost an increasingly rare member of the profession, one whose interests and accomplishments covered a truly amazing range, from purely academic subjects to those having immediate and identifiable practical importance, and from exclusively engineering and scientific topics to economics and the reform of the prison system. He was Distinguished Professor of Chemical Engineering Emeritus at the City College of New York (CCNY) at the time of his death.

Reuel was born in Wiener Neustadt, Austria, on September 15, 1923. He grew to a carefree adolescent who came from a comfortable home and attended a fine school, where he excelled as a student, but he was forced out of high school in 1938 after the German annexation of Austria, when the survival of his family became increasingly threatened. Shortly thereafter his parents sent him and his sisters to Sweden in a Kindertransport. In Stockholm, a wealthy businessman offered to pay his tuition expenses at a technical school for one semester, but Reuel would have to perform at a level that would qualify him for a scholarship in order to complete the rest of his education. The headmaster was happy to assist so promising a student, but only if he studied chemical engineering,

which most students avoided because they considered it too difficult, and Reuel agreed.

In 1941 the Jewish Agency, which supported the basic needs of the Kindertransport refugees, decided that some of the teenagers should be sent from Sweden to prestate Israel by train through the Soviet Union and Turkey. Reuel asked his supervisor at the agency to fund his tuition at the Technion and, although he had not graduated from high school and the school he had attended in Sweden was not for college-bound students, he passed the qualifying exams and was accepted. He wanted to study mathematics, but his supervisor objected—mathematics was too theoretical to be practical. Because engineers were in short supply and Reuel had already studied chemical engineering, his tuition would be funded if he continued on this track. He earned a BS (1945) and MS (1954) from the Technion and an ScD from Columbia University in 1957, all in chemical engineering.

From 1947 to 1962, except for the three years he studied at Columbia, Reuel was employed by the Israel Defense Industry as technical manager of explosives and ammunition and, from 1957 to 1962, as chief engineer. He also held a half-time position at the Technion from 1957 to 1962 as associate professor of chemical engineering.

In 1962–1964 he was invited to Princeton University’s Guggenheim Laboratories as a visiting research fellow to work at the Jet Fuels Institute. From there he joined the CCNY Department of Chemical Engineering as a professor in 1964 to help establish the new PhD program, and he was named a Distinguished Professor in 1979. He also maintained a vigorous consulting practice until his death, serving both industry and government agencies.

Much of his early research concerned physical processes that have a stochastic component; this included the study of dispersion and particle-size distributions in mixing vessels, crystallizer dynamics, coalescence, and the use of residence-time distributions for process understanding. He also carried out research on the flow of non-Newtonian fluids; his work on

the unusual breakup dynamics of jets of dilute polymer solutions continues to be cited after more than 40 years.

His experience with Israel Military Industries and his work on oxidation kinetics at the Guggenheim Laboratories led him naturally to chemical reaction engineering, where he published several book chapters and many significant papers on the design, operation, and control of stirred tank, fixed bed, and fluidized bed reactors and the thermodynamic analysis of reaction systems. Reaction engineering was also the primary focus of his consulting practice, and he held 16 patents on hydrocarbon processing, separation processes, power generation, and thermal storage, many of which are still practiced; for example, 30 fluidized catalytic cracking units based on his novel design are in use around the world.

The hallmark of his work was the integration of his experience as a designer into his fundamental research, enabling him to utilize the tools of engineering science in practical applications, and his novel insights have had a strong impact on the practice of chemical engineering. In one series of insightful papers, for example, he pointed out that the inherent inaccuracies and uncertainties in the process models used in the chemical industry require that the design methodology for controllers be fundamentally different from that in the aerospace and electronics industries. These papers were a turning point in the application of modern control theory to real chemical processes, and they initiated a major shift in research by the chemical engineering control community.

Reuel also exhibited unusual physical intuition, and was well known for his ability to identify the relevant mechanisms for design or control, with rigorous corroboration by colleagues following only later. Though he was an inveterate modeler, he noted that “a model is only useful when it fails,” that is, when it tells you that something important is missing.

After his election to the NAE in 1985, he served on the NRC Panel on Energy and Natural Resources Processing (1985–1988) and Committee to Examine the Research Needs of the Advanced Extraction and Process Technology Program (1992–1993), and the NAE’s Chemical Engineering Peer Committee

(1997–2000). He was a fellow of the American Institute of Chemical Engineers (AIChE) and recipient of its Alpha Chi Sigma Award for Chemical Engineering Research (1979) and Founders Award (1992).

Reuel made a point of addressing the broader technical community, and published many papers on process technology, economics, and energy issues in periodicals such as the American Chemical Society’s ChemTech and the AIChE’s Chemical Engineering Progress.

He also used his analytical skills to address problems well beyond conventional chemical engineering. Two papers on the criminal justice system published in the Journal of Criminal Justice (1973) and Law & Society Review (coauthored with his son Shlomo; 1975), which use mathematical modeling and control theory concepts to analyze the effect of imprisonment on crime rates, are still routinely cited in criminology texts and analyses of sentencing guidelines. A paper on industrial performance, published in the Journal of Business (1989), has had a profound effect on economic thinking about corporate financial analysis. An analysis of Modern Jewish Orthodoxy, published by the Jerusalem Center for Public Affairs (1998), is a significant sociological study of his own religious community, and he also published numerous shorter pieces in Jewish publications such as Shma. A paper on new-onset seizures in children in the Annals of Neurology (2001), also coauthored with Shlomo and using control concepts, is among his most highly cited publications. And as he became increasingly concerned in the decade preceding his death about globalization and its impact on our readiness to respond to a military threat, he wrote articles on the export of strategic segments of the US industrial complex and the impact of imported fossil fuels on economic and military security, together with recommended solutions.

Reuel had a capacity for penetrating analysis and was a keen and outspoken critic of ideas that he thought had not been thoroughly thought through. He encouraged younger colleagues to come to him to discuss their research ideas, but they had to be forewarned to anticipate the inevitable response to the

first presentation: “That’s crap” (pronounced approximately like the French crêpe, with a guttural rolled r, and sometimes unrecognizable as a criticism to an unwarned recipient). Those with the courage to return found him a supportive and caring mentor. Younger engineers in industry faced with a Shinnar cross-examination during a consulting visit approached him with trepidation, but they ultimately viewed him as an indispensable asset because of his broad knowledge and analytical skills as well as his honesty and integrity.

A 2003 letter in Chemical & Engineering News illustrates the classic Shinnar approach: It starts with an indisputable array of evidence, demands a logical but unpopular conclusion, and ends with this observation: “How the promoters of fuel cells could convince government agencies to subsidize with large sums of money a technology that wastes money and poisons the environment with greenhouse gases is a subject that I will leave to sociologists to explain.”

Reuel instilled a love of science and academia not only in his many students but also in his children. Both his sons obtained a PhD and an MD, and both are professors. He was a devoted family man, the undisputed patriarch of the clan who loved to have the entire family together during the holidays. He delighted in giving advice on life not just to his students but also to his grandchildren, who were the recipients of Shinnar lectures that mirrored his discussions with young faculty: simultaneously blunt and supportive.

He is survived by his wife Mildred; a sister, Ruth Matar; sons Shlomo and Meir; six grandchildren; and nine great-grandchildren. His first wife, Miryam, died in 2000.

I am grateful to Mildred and Shlomo for information about Reuel’s early years, and to Andreas Acrivos, Amos Avidan, Fred Krambeck, Dan Luss, Manfred Morari, David Rumschitzki, and George Stephanopoulos for commenting on a first draft and providing recollections and suggestions.

Next: CEDOMIR M. SLIEPCEVICH »
Memorial Tributes: Volume 19 Get This Book
×