Get This Book
Visit NAP.edu/10766 to get more information about this book, to buy it in print, or to download it as a free PDF.
« Previous: CEDOMIR M. SLIEPCEVICH
Page 281 Share Cite
Suggested Citation:"HAROLD G. SOWMAN." National Academy of Engineering. 2015. Memorial Tributes: Volume 19. Washington, DC: The National Academies Press. doi: 10.17226/21785.
× 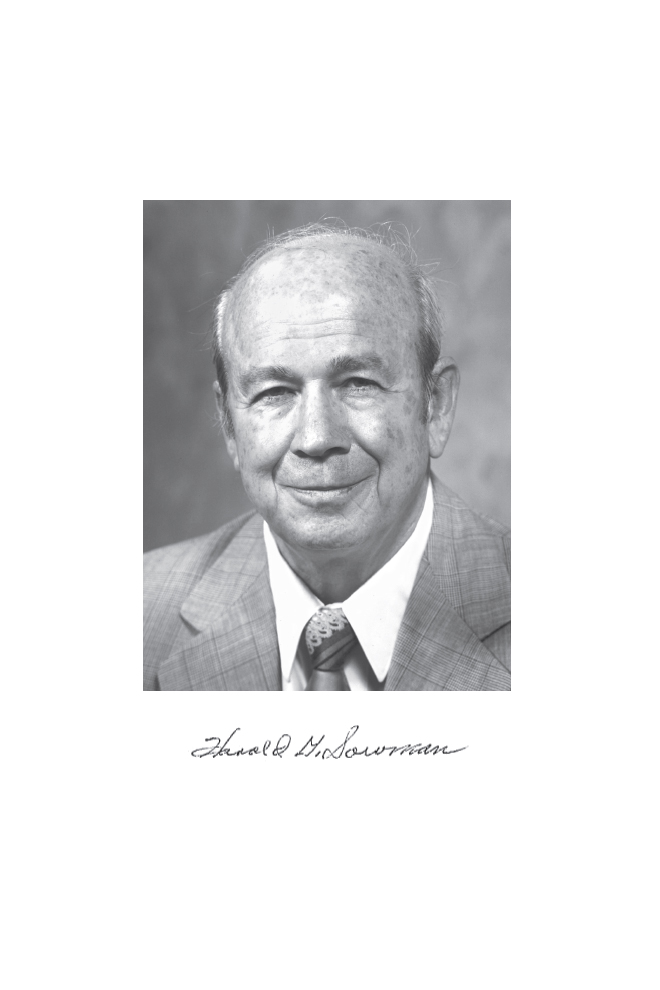 “For pioneering development of sol ceramics technology into new industrial materials, including ceramic fibers and abrasives.”

HAROLD GENE SOWMAN, a remarkably productive engineer at the forefront of the changing field of post–World War II ceramic science and technology, died on November 29, 2012, at age 89. He was a pioneer in ceramic materials for nuclear reactors in his early career and later developed sol ceramics technology into new processes for manufacturing ceramic materials and products. In the course of this work he added much to the science of these materials as well.

Born on July 21, 1923, near Murphysboro, Illinois, Hal grew up in the southern Illinois coal mining country. He was grateful for the many who helped him get through his schooling, including a kindly landlady in whose boarding house he stayed and where he worked part-time to pay for room and board. He joined ROTC, graduated as a second lieutenant in the Corps of Engineers at Ft. Belvoir, Virginia, and was awaiting service in the Pacific when World War II ended. His wife to be, Gladys (Timmie), worked in nearby Washington and after the war they moved back to the University of Illinois, where he obtained his PhD in 1951. In the mid-1950s they adopted a daughter, Letitia (Letty), and a son, Daniel (Danny).

Hal joined the Titanium Alloy Division of National Lead Co. in 1951 but by 1952 was fascinated by the emerging atomic energy field and went to work at General Electric’s Knolls

Atomic Power Laboratory in Niskayuna, New York. Here he developed ceramic materials for the Navy submarine project and was involved with both cermets and ceramic oxides for commercial reactors. He was part of the very early UO2 fuel pellet program.

He left GE five years later to work with 3M in its new nuclear energy lab. At 3M he was coinventor of a number of nuclear materials patents that formed the basis of micro-spherical coated fuel particles embedded in graphite fuel elements such as the ensuing pebble bed reactors. These particles were first used in a prototype reactor designed for space rocketry, the Kiwi B4-E 301, successfully tested by Los Alamos National Laboratory in the Nevada desert. The technology was put on the shelf after the demise of nuclear reactor construction in the 1970s–1980s but it is making a comeback, in the Chinese construction of a modern version of a high-temperature reactor.

Hal became interested in developing sol gel ceramics, which he saw as the basis of revolutionary ways of making 3M abrasives and reflective beads of high index of refraction. He investigated detailed phase relationships of many ceramic oxides related to his sol gel products. His combined work in the field led to making sol gel–derived fibers, beads, bubbles, and thin films. The fiber work was soon found to be useful in classified nuclear projects, and later other fibers were used to toughen and strengthen the insulating tiles for the space shuttle.

His technology was especially useful in replacing conventional processes for making abrasive grains, which can now be formed essentially at room temperature and in compositions not obtainable by traditional methods. In turn the products have made major changes in the finishing of stainless steels and other metals. His ceramic fiber technology encouraged the related refractory fiber industry worldwide and provided a means for producing much lighter alumina-reinforced aluminum electric power transmission lines. And the safety of roadways has been improved with better light-reflecting microsphere media that resist traffic abrasion.

Many other uses have been found for his broad range of sol gel–derived ceramics, including medical and dental applications. He had 30 patents and authored 25 publications.

Hal received many honors in his lifetime: 3M’s highest honor, election to the Carlton Society (and 3M received the National Medal of Technology, accorded to the members of the Society); the Minnesota Wonders of Engineering Award, the I-R 100 award for his fibers, the University of Illinois Engineering Distinguished Alumni Award, and several prestigious awards from the American Ceramic Society, of which he was a fellow, for his many innovations in ceramic materials and processes. He was especially honored to be elected to the NAE in 1984 for his engineering accomplishments.

He was proud of his home state and a generous contributor to the University of Illinois, from which he obtained his undergraduate and graduate degrees. His service outside his local community included two years as industrial advisor for the Department of Engineering at Tuskegee University, membership on the NAE Steering Committee on the Commercialization of Technology and the Materials Advisory Board, and numerous activities for the University of Illinois Ceramic Engineering Department.

Hal was a born innovator and major contributor to his field. He was a great friend and generous man to many. He will be missed.

Next: MARSHALL B. STANDING »
Memorial Tributes: Volume 19 Get This Book
×