Get This Book
Visit NAP.edu/10766 to get more information about this book, to buy it in print, or to download it as a free PDF.
« Previous: BORIS BRESLER
Page 37 Share Cite
Suggested Citation:"BERNARD BUDIANSKY." National Academy of Engineering. 2015. Memorial Tributes: Volume 19. Washington, DC: The National Academies Press. doi: 10.17226/21785.
× 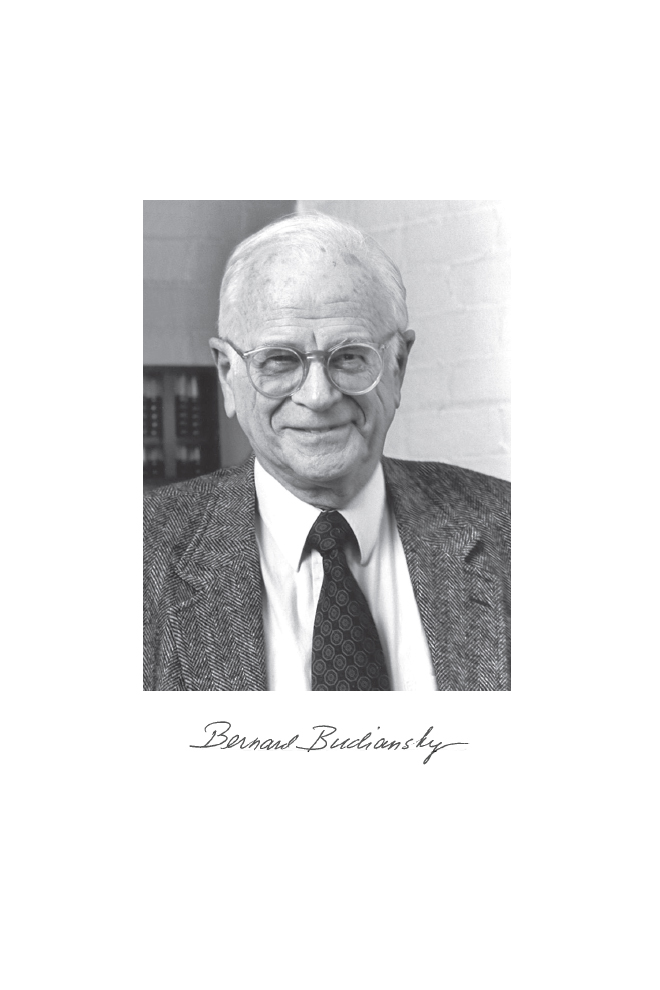 “Contributions to the understanding of buckling phenomena, materials behavior, and new mathematical analyses of structural response.”

BERNARD BUDIANSKY, an engineering scientist whose research and teaching shaped the fields of structures and the mechanics of materials, died at the age of 73 on January 23, 1999, in Lexington, Massachusetts. No one who interacted with Bernie would fail to remember the delightfully opinionated, thoughtfully probing, 6′4″ man with a large personality to match.

Bernie’s career coincided with the US space effort and the expansion of engineering research in American universities. His first technical job after college was at the National Advisory Committee for Aeronautics (NACA). From 1955 until his retirement in 1995, he was on the faculty in the Division of Engineering and Applied Sciences at Harvard University, as the Gordon McKay Professor of Structural Mechanics from 1961 and then as the Abbott and James Lawrence Professor of Engineering from 1983.

His early research and consulting were heavily influenced by his exposure to developments in space structures at NACA (predecessor of the National Aeronautics and Space Administration, NASA). Many of his early contributions focused on plate and shell structures in studies of buckling, vibrations, and flutter. His research interests were as dynamic as his persona. Over his career, he made fundamental contributions to plasticity theory, composite materials, and many

aspects of micromechanics, including geophysical materials and biomechanics.

As an engineering scientist, Bernie employed basic mechanics, the methods of applied mathematics, and numerical analysis to conduct his research. His career also spanned the growth of computer use in engineering, and he was at the forefront of this revolution.

Bernie was born in New York City on March 8, 1925, to Russian immigrant parents. His father left the family when Bernie was a small child and he was raised by his mother and grandfather. He studied civil engineering at the City College of New York and graduated in 1944 at the age of 19. He retained a lifelong pride in the fact that his undergraduate college produced so many of the nation’s leading engineers and scientists.

At City College he honed his skills in mathematics and physics in addition to engineering. And his first job, in the Structures Research Division of NACA at Langley Field in 1944, turned out to be an ideal match for these skills and interests. His first paper, on the elastic buckling of plates, launched him on the road to becoming America’s leading expert in the buckling of structures.

During his NACA years (1947–1950) Bernie matriculated at Brown University, where he received both an ScM and a PhD, advised by William Prager. In his PhD thesis he invented the slip theory of plasticity, which led to new understanding of metal plasticity and, in particular, its application to structures that buckle after they are loaded into the plastic range. His thesis spawned much follow-on research, especially in the Soviet Union. Some of the underlying ideas in the thesis had emerged from interactions at NACA with Sam Batdorf, whom Bernie came to regard as his most important mentor.

Motivation for the new slip theory came from an extensive series of plastic buckling experiments on plates and shells at Langley and elsewhere that revealed that predictions from the so-called deformation theory of plasticity (in reality, not a plasticity model but a nonlinear elasticity material model) consistently did a better job reproducing experimental results than those from the most widely used, and supposedly more

After his graduate years at Brown Bernie returned to NACA and in 1952 became head of the Structural Mechanics Branch. At Langley he met Nancy Cromer, a North Carolinian who assisted with large numerical computations before the era of electronic computers. The couple married in 1952 and had two sons, Michael and Stephen. Throughout the years that followed, Nancy balanced Bernie’s faux aggressive, New York style with an equally smart, calm humorous manner. The couple shared many interests, such as literature, good food, travel, and even horse racing.

In 1955 Bernie accepted a position as associate professor of structural mechanics at Harvard University, where he soon assumed the Gordon McKay Professorship in Structural Mechanics. He remained at Harvard for the rest of his career. Initially, he continued his groundbreaking research on structures. One example is his work published in the early 1960s with a PhD student, N.C. Huang, on the nonaxisymmetric buckling of clamped spherical shell caps subject to pressure, an outstanding problem connected with reentry capsules. Their work demonstrated the utility to structural analysis of numerical methods executed by computers. Budiansky solved the nonlinear axisymmetric prebuckling problem, and the two men obtained the buckling pressure and mode by solving the nonaxisymmetric buckling problem. The results could not have been obtained without the aid of a computer.

pressure, both of which buckle at loads typically as low as a fourth or fifth of the theoretical prediction. Bernie appears to have been the first, other than W.T. Koiter himself, to appreciate that Koiter’s general theory of elastic stability and imperfection sensitivity held the answer to the discrepancy.

In 1945 in war-time Holland, Koiter developed and published (in Dutch) his thesis at Delft University, an elegant theory of elastic stability that laid out nonlinear buckling behavior and the sensitivity of buckling to initial structural imperfections. This theory revealed why experiments and classical buckling theory are in general agreement for columns and plates (they are not imperfection-sensitive) and why they are in sharp disagreement for many shells (they are extremely imperfection-sensitive). With the help of a colleague who could read a little Dutch, Bernie translated Koiter’s thesis into a mathematical form that in many ways was more transparent than the original and thus introduced it to the American structures community. Then, with the assistance of a young colleague (the author of this memoir), he wrote a series of papers on the nonlinear behavior buckling of structures based on this approach, which had a transformative influence on elastic stability and set the stage for a rational way of dealing with imperfection-sensitive structures.

During the same time period, and in parallel to his work on buckling, Bernie was one of the leading contributors to the development of the theory of shells. In this effort he collaborated closely with a colleague at Harvard, J. Lyell Sanders. Their work was carried out in harmonious coordination with Koiter in Delft.

In the early 1960s there were numerous competing sets of shell theory equations creating considerable confusion for engineering users. Koiter made a major breakthrough by showing that errors inherent to any two-dimensional theory of shells meant that many of the competing theories were equivalent as far as accuracy was concerned. Budiansky and Sanders followed up by identifying a theory that combined accuracy with additional desirable mathematical features. In their tongue-in-cheek title, they designated it “The Best Theory,” and it remains the standard.

Beginning in the 1960s, much of the research in solid mechanics shifted from structures to materials, and Bernie was one of the leaders in this transition. His earliest contributions used self-consistent averaging methods to compute the stress-strain behavior of polycrystalline materials based on the elastic-plastic response of the single crystal constituents. With geophysicist Richard J. O’Connell he made a major contribution to the fundamental understanding of seismological wave speeds by applying these methods to determine the influence of microcracks, and the role of water infiltration into the cracks, on the effective elastic moduli of rocks. Many other contributions to what became known as micromechanics followed, including the role of fiber debonding and sliding in the tensile fracture of fiber-reinforced composites, fiber kinking as a mechanism for limiting the compressive strength of composite materials, phase transformations as a toughening mechanism in ceramics, and the mechanics of void growth in ductile fracture.

For more than 20 years beginning around 1970, Bernie was a member of a Defense Advanced Research Projects Agency (DARPA) group, the Materials Research Council (now called the Defense Sciences Research Council), that met each summer in La Jolla for four weeks to explore promising new ideas in materials and their applications. It was during this period that he developed close collaborations and friendships with Anthony G. Evans and James R. Rice. Rice later joined Budiansky on the faculty at Harvard, as did Evans for a few years. Evans, a materials engineering scientist, was a remarkable research leader who inspired Bernie to tackle the theoretical aspects of many challenging problems in micromechanics. Bernie was fond of pointing out that Evans knew well the limits of a theoretician (i.e., himself), and was careful not to confuse him by relating more background technicalities than necessary.

He received many honors, including two of the most important in the field of structures and the mechanics of materials, the Timoshenko Medal of the American Society of Mechanical Engineering (1989) and the Theodore von Kármán Medal (1982) of the American Society of Civil Engineering. He was the Dryden Research Lecturer of the American Institute of Aeronautics and Astronautics in 1970. He was elected to the National Academy of Sciences in 1973 and the NAE in 1976, and as a foreign member of the Royal Netherlands Academy of Arts and Sciences (1977) and the Danish Center for Applied Mathematics and Mechanics.

Bernie Budiansky will be remembered by colleagues and students as an exceptionally incisive and creative engineering scientist who was always open to discussion and who relished resolving a technical matter. The resolution process was seldom smooth sailing, but it was always worth it.

Next: JAMES R. BURNETT »
Memorial Tributes: Volume 19 Get This Book
×