Get This Book
Visit NAP.edu/10766 to get more information about this book, to buy it in print, or to download it as a free PDF.
« Previous: Appendix C: Full Framework Example: Narrowing Uncertainty in Climate Sensitivity
Page 78 Share Cite
Suggested Citation:"Appendix D: Full Framework Example: Determining Sea Level Rise and Its Acceleration." National Academies of Sciences, Engineering, and Medicine. 2015. Continuity of NASA Earth Observations from Space: A Value Framework. Washington, DC: The National Academies Press. doi: 10.17226/21789.
×

Sea level rise is the result of two major components of climate change: the warming of the ocean, which is the major repository of the heat stored in the Earth system, and the water added to the ocean from land surface changes, such as increased river runoff and the melting of the polar ice sheets and mountain glaciers. Changes in sea level measurements provide a critical constraint on estimates of ocean heat storage (see Appendix E) and land water storage, as well as ice loss. Storage of heat in the ocean buffers the rise in atmospheric temperatures by absorbing heat from the atmosphere.

The melting of land ice from climate change could potentially raise sea level by more than 1 m by the end of the 21st century, jeopardizing lives and properties in the world’s coastal zones and islands. A one-meter rise by the end of the century is estimated to have global economic impacts of trillions of U.S. dollars (Sugiyama et al., 2008) and displacement of 10 percent of the world’s population if no adaptation is applied.

Before the advent of satellite observations of sea surface height with radar altimetry, it was not possible to make direct determination of the global mean sea level. The sparsely located tide gauges were not able to sample the uneven spatial distribution of sea level change, leading to biased measurement. The 20-year record (Figure D.1, from Nerem et al., 2010) from satellite altimetry is the first directly measured time series of the global mean sea level. The satellite’s uniform global sampling also reveals the complex geographic pattern of sea level change over the past 20 years (Figure D.2, from Willis et al., 2010), underscoring the uncertainty from sparse tide gauge measurement. Satellite altimetry provides a unique utility for addressing the quantified objective for sea level. 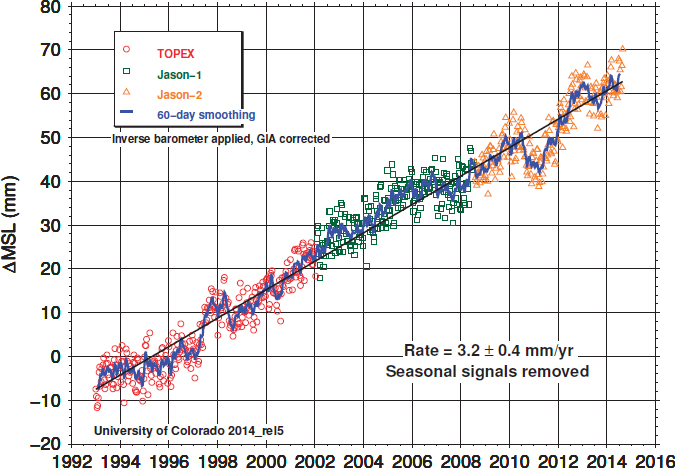 The contributions to recent sea level rise have roughly equal partitions among the steric effect from ocean warming, the melting of mountain glaciers, and the melting of polar ice sheets (Gardner et al., 2013; Shepherd et al., 2012). The measurement of the change of Earth’s gravity field from space gravimetry demonstrated by the GRACE Mission (Tapley et al., 2004) has for the first time provided direct observation of the mass added to the ocean from ice melt. The difference between altimetry and gravity measurements (Figure D.3, from Llovel et al., 2014) is attributed to the steric sea level change, which has been observed by an in-situ network of float measurements (Argo). The intercomparison of satellite and in situ observations has provided cross-calibration and mutual validation of the measurement system. Figure D.3 illustrates that the observations from altimetry, GRACE, and Argo are consistent with each other to the extent of the observational errors.

The ability to diagnose sea level change in terms of its steric and mass components represents a key step toward understanding the physical processes. GRACE provides a unique utility to understand the process of global sea level change while Argo provides an essential in-situ component for calibrating and validating the spaceborne observations.

Satellite altimetry missions with the accuracy and precision of the TOPEX (Ocean Topography Experiment)/Poseidon and the Jason series are capable of reaching 0.4 mm/yr accuracy in global mean sea level (Nerem et al., 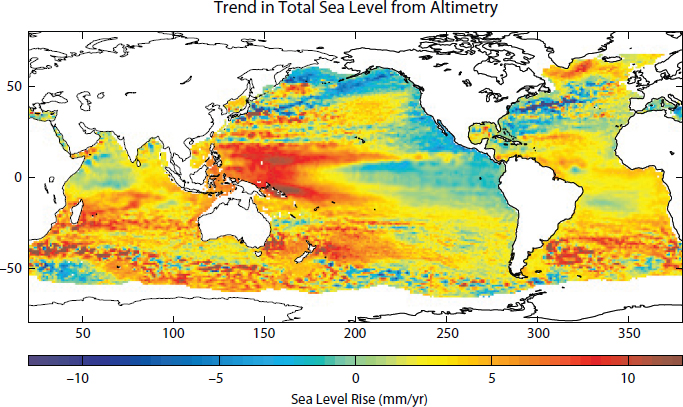 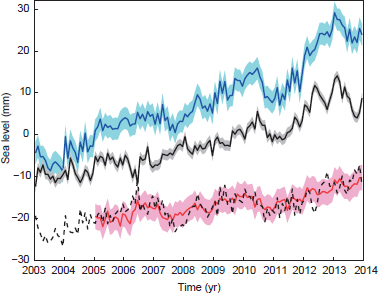 2010). The uncertainty in the measurement is dominated by the knowledge of land motion in the error budget of tide gauge calibration of altimetry. The time scale of the land motion is much longer than a decade. The uncertainty in determining the change in sea level rate over a decade is then reduced to the formal error in the estimate of a linear trend, which is about 0.07 mm/yr.

From the equation for the accuracy factor of the quality metric in Section 4.3.1, the quality (accuracy factor) of the altimetry observation of the sea level variable for meeting the quantified objective has a score of 0.99.

The estimation of the contribution of ice melt to the gravity variation determined by GRACE is significantly affected by the uncertainty in the knowledge of the Glacial Isostatic Adjustment (GIA). However, the time scale of the GIA is also much longer than a decade. The error associated with the GIA is thus cancelled in the estimation of the decadal change of the mass component of sea level change, leading to an uncertainty of 0.1 mm per year on decadal scale.

From Section 4.3.1, the quality (accuracy) of the GRACE observation of the mass component of sea level has a score of 0.99.

Satellite altimetry missions since TOPEX/Poseidon have had lifetimes of more than twice their designed life of 5 years; the technology as well as implementation is considered mature. The probability of success is rated in thus in the highest category with a score of 1.0 (see Section 4.4 for scoring rationale).

The GRACE mission, although first of its kind, has lasted more than twice its designed life of 5 years. Again, as explained in Section 4.4, the probability of success is assessed to be 1.0.

Sugiyama, M, R.J. Nicholls, and A. Vafeidis. 2008. Estimating the Economic Cost of Sea-Level Rise. Report 156 of the MIT Joint Program on the Science and Policy of Global Change, Massachusetts Institute of Technology, Cambridge, Mass.

Next: Appendix E: Full Framework Example: Determining the Change in Ocean Heat Storage »
Continuity of NASA Earth Observations from Space: A Value Framework Get This Book
× 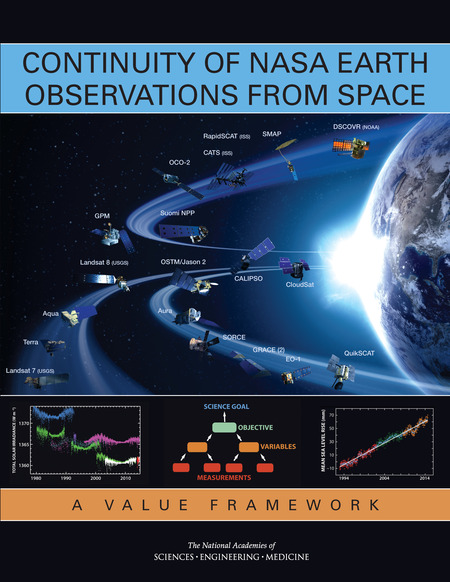