Get This Book
Visit NAP.edu/10766 to get more information about this book, to buy it in print, or to download it as a free PDF.
« Previous: 7 Comparing Hypothetical Models of Governance for Global Health
Page 105 Share Cite
Suggested Citation:"8 Closing Comments." National Academies of Sciences, Engineering, and Medicine. 2016. Global Health Risk Framework: Governance for Global Health: Workshop Summary. Washington, DC: The National Academies Press. doi: 10.17226/21854.
×

A final brief discussion session followed comparisons of the four global health governance models and subsequent remarks and discussion on research and humanitarian considerations. Two main themes emerged in this exchange: the assignment of decision-making responsibilities during health emergencies, and the need to define and measure health outcomes as a means to ensure accountability.

CONVERGENCE ON ELEMENTS OF A SUCCESSFUL MODEL

Throughout the discussion of the various hypothetical governance models, it was difficult to settle on a clear solution that was distinct from the others, but several supported themes across the different elements emerged. Conversations elicited a need for change at multiple levels of governance, but the degree of that change and the types of focus that should be employed varied across models and among participants. In Model 1, which called for a “reformed World Health Organization (WHO),” Clift and Stocking agreed that staffing of offices should be country and region appropriate. Tomori and Elias noted that it would be insufficient because there is a need for reform at the regional and national levels, which cannot be solved through changes in international governance structures. Tomori especially called for a focus on national ownership and reform, and Elias advocated for building strong systems on the ground level, with national political and technical leadership.

Model 2, which proposed a “WHO Plus” arrangement, would include peer review rather than self-assessment of the core competencies of the

International Health Regulations (IHR), and a WHO Center for humanitarian and outbreak response as proposed in the Ebola Interim Assessment Panel. While this model received much support, it was contingent on whether WHO can coordinate across systems at the level that is needed. While he favored the model, Elias pointed out that challenges in funding and linkages to the United Nations (UN) remain. Kimball, Rasanathan, and Shibuya also supported the need to combine universal health care and health security in this proposal, as leaving them as separate pieces of a solution would not provide the advancement needed. Additionally, more effective engagement with the private sector was said to be necessary for this model to work well, according to Elias, Heywood, and Rasanathan.

The third model discussed was a proposal for an executive agency that would play a strategic operational and tactical role in a health emergency, with a matrix of health risk typologies where only Types 3 and 4 would involve WHO being the lead. A regional response to a Type 4 health risk would allow for greater harmonization between WHO and UN regional offices and programs, which was endorsed by Rasanathan. A few participants noted the global difficulty this would involve because of the lack of coordination between WHO’s proposed emergency preparedness and response center and the UN programs and funds within the framework of Office for the Coordination of Humanitarian Affairs. Additionally, there is currently no provision for harmonization with nongovernmental organizations (NGOs) under the framework of the Inter-Agency Standing Committee. Rasanathan supported a strengthened WHO taking on global health governance, but called for the need to bridge the cultural differences between those who work on disease outbreaks and those who work in humanitarian responses, and proposed that all organizations need to overcome segmentation and improve flexible response capacities.

Finally, the last hypothetical model called for a separate agency to be created, as the current system lacks coherence, according to López-Acuña. However, even the creation of the UN Mission for Ebola Emergency Response, a temporary creation in response to Ebola, caused unnecessary layers of coordination challenges, he said. Additionally, López-Acuña disagreed that a separate entity could solve IHR compliance, because of the difficult issues of independent, national sovereignty and the challenges that international officials have with overstepping that sovereignty. Many participants disagreed overall with creating a new entity, including Elias, Kapila, and Rasanathan, saying that changing structures will not have the impact everyone is looking for, but processes do need to change.

Fineberg noted that several workshop participants had advocated changes to the decision-making and assessment processes that occur once a potential health threat emerges, such as assigning the decision of whether to declare a public health emergency of international concern (PHEIC)—now the sole responsibility of the WHO Director-General—to an independent committee. Likewise, he observed, some discussants recommended the creation of a committee for response assessment that would be responsible to the World Health Assembly or some other group of member states, rather than to the WHO secretariat. “If part of the core objective is strengthening capacity of the WHO to carry out the core functions that we are describing, I can well appreciate the merit of a distinctive independent evaluation mechanism that would report to the states or to the states group,” he stated. However, he disagreed with the notion of distributing decision-making authority away from the WHO Director-General, as is called for in the Independent Panel on the Global Response to Ebola. Instead, he argued, there should be a well-established pathway for sharing information and advice, recognizing that eventually a decision has to be made, and someone has to be responsible. That responsible party should also be responsible for acting on the decision, and continuing to consider it as additional information accumulates. Rima Khabbaz of the U.S. Centers for Disease Control and Prevention reminded the audience that an international panel currently advises the WHO Director-General on possible PHEICs—not a completely independent mechanism, she acknowledged, but an important source of input. Perhaps a trigger could be devised that would automatically call this group together, she suggested.

López-Acuña agreed with Fineberg. “I don’t think that the solution is going to be to divide the decision-making power by committees that are externally independent,” López-Acuña stated. Rather, the WHO Executive Board should select advisors on possible PHEIC declarations, not the Director-General. He did, however, advocate the creation of an independent, nonpoliticized accountability commission to evaluate WHO’s performance in responding to health emergencies. Additionally, he and Heymann both saw the need for introducing intermediate measures into the PHEIC decision-making process, to help alleviate the outbreak before it reaches full and worldwide emergency status.

Over the course of the workshop, several discussants argued that funding for health emergency preparedness and response should be linked to a system of monitoring and evaluation for the sake of accountability, to

If there is a demand that WHO, NGOs, and other organizations operate differently as they respond to global health emergencies, then there need to be defined measures and outcomes and accountability for the changes being sought, Goodman asserted. Revisions to any system should incorporate such performance measures, he added. For example, he noted, the public health preparedness capacity of individual states in the United States is measured by their performance in exercises. Similar evaluations could be applied to other emergency responders. We must also identify ways for WHO and NGOs to ensure that they are using resources effectively to deliver core competencies, he added.

One might also evaluate the process of creating a unified global health risk framework, and the framework itself, Relman observed, suggesting that this effort may not be successful unless there is evidence of meaningful impact. In the end, what really matters is the improved health of the world’s people, and improved capacity to anticipate, respond to, and recover from global health threats, which are inevitable. But how to measure whether or not that impact has occurred is more difficult, Relman acknowledged, insisting that measurement that is predictive of improved health and improved public health capacity is the most important of all. 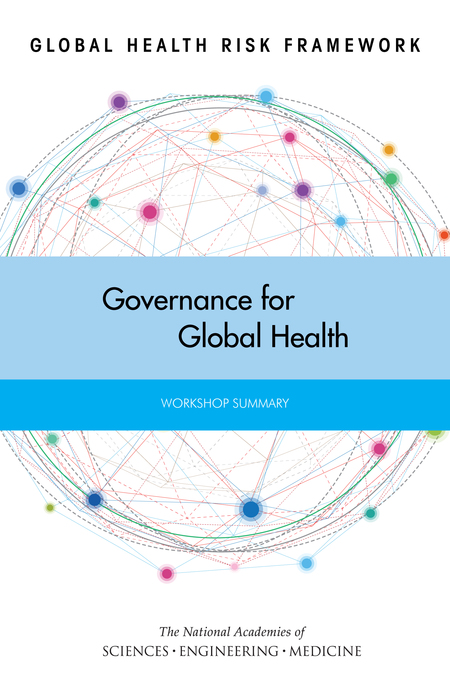 Since the 2014 Ebola outbreak many public- and private-sector leaders have seen a need for improved management of global public health emergencies. The effects of the Ebola epidemic go well beyond the three hardest-hit countries and beyond the health sector. Education, child protection, commerce, transportation, and human rights have all suffered. The consequences and lethality of Ebola have increased interest in coordinated global response to infectious threats, many of which could disrupt global health and commerce far more than the recent outbreak.

In order to explore the potential for improving international management and response to outbreaks the National Academy of Medicine agreed to manage an international, independent, evidence-based, authoritative, multistakeholder expert commission. As part of this effort, the Institute of Medicine convened four workshops in summer of 2015 to inform the commission report. The presentations and discussions from the Governance for Global Health Workshop are summarized in this report.