Visit NAP.edu/10766 to get more information about this book, to buy it in print, or to download it as a free PDF.
Page i Share Cite
Suggested Citation:"FRONT MATTER." National Research Council. 1993. Health Effects of Ingested Fluoride. Washington, DC: The National Academies Press. doi: 10.17226/2204.
×

PREFACE Fluoridation of public water supplies has aroused considerable discus- sion among scientists and the general public since it began in 1945. Although the majority of scientists support the measure, some take the view that fluoridation can produce not only adverse cosmetic effects from severe dental fluorosis, but also adverse health effects. Scientists have become increasingly aware of the potential for exposure to toxic concentrations of fluoride from water and other sources (e.g., foods, processed beverages, dental products, and fluoride supplements). Thus, accurate information on the potential health effects of fluoride is needed. To address that need, the U.S. Environmental Protection Agen- cy (EPA) requested that the Committee on Toxicology (COT) review the health effects of ingested fluoride and determine whether EPA's maxi- mum contaminant level of 4 milligrams (mg) of fluoride per liter (~) of drinking water is appropriate. In response, COT organized the Subcom- mittee on Health Effects of Ingested Fluoride, which includes! scientists with expertise in toxicology, pathology, medicine, dentistry, epiclemiol- ogy, biostatistics, and risk assessment. The subcommittee reviewed various kinds of toxicity that have been attributed to ingestion of fluoride (dental fluorosis; bone fracture; reproductive, renal, gastrointestinal, and immunological toxicities; genotoxicity; and carcinogenicity) anti assesses! the current EPA drinking-water stand are] for fluoride to determine if it is protective of public health. The report of the subcommittee is intended for use by EPA in deciding whether to maintain or revise its current drinking-water standard for fluoride. · · . x'''

XiV Preface The subcommittee gratefully acknowledges He interest and support of Edward Ohanian and Kenneth Bailey of EPA. We also thank other per- sons who provided information or prepared presentations for the sub- committee, including Steven Gordon, National Institutes of Health; Daniel Hoffman, George Washington University; Lent Johnson, John Pletcher, and Michael Slayter, Armed Forces Institute of Pathology; and Frank Young, U.S. Department of Health and Human Services. We are grateful to the anonymous reviewers for their many helpful comments and suggestions that have resulted in improvements in the presentation of the subcommittee's findings. This report could not have been produced without the untiring efforts of the National Research Council staff: Richard D. Thomas, program director; Ruth E. Crossgrove, editor; Ruth Danoff, project assistant; and Catherine Kubik, senior program assistant. Finally, the subcommittee gratefully acknowledges the persistence, patience, and expertise of Kulbir S. Bakshi, project director of the sub- committee, in bringing this report to its final form. Bernard Wagner, Chair Subcommittee on Health Effects of ingested Fluoride Rogene F. Henderson, Chair Committee on Toxicology

Next: EXECUTIVE SUMMARY »
Health Effects of Ingested Fluoride Get This Book
× 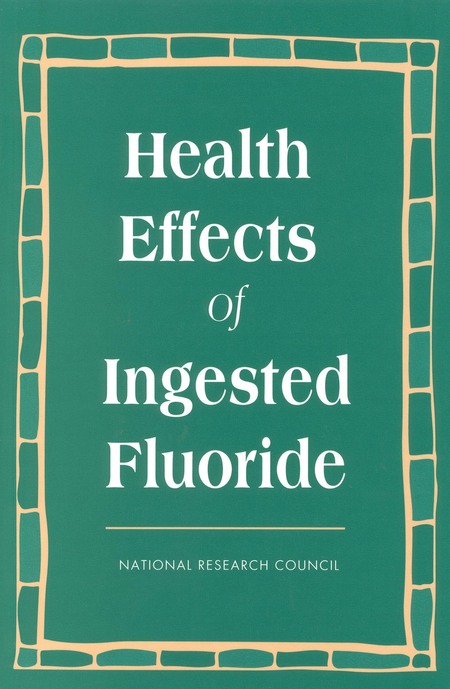