Research to Protect, Restore, and Manage the Environment (1993)

Get This Book
Visit NAP.edu/10766 to get more information about this book, to buy it in print, or to download it as a free PDF.
« Previous: Executive Summary
Page 17 Share Cite
Suggested Citation:"1 Introduction." National Research Council. 1993. Research to Protect, Restore, and Manage the Environment. Washington, DC: The National Academies Press. doi: 10.17226/2216.
×

ORIGIN, SCOPE, AND ORGANIZATION OF THE REPORT

The charge to our committee follows the legislative resolution that led to our creation:

The study committee will review existing federal programs for the support of environmental research and training, and examine ways to improve these programs, including proposals to establish a National Institutes for the Environment. It may, if appropriate, recommend actions by the federal government that would improve the science base in environmental protection and resource management.

In carrying out this charge, the study Committee will:

training, including proposals to establish a National Institutes for the Environment (NIE);

Appendixes contain essential information that guided the deliberations of the committee. Appendix A describes current environmental research programs in the federal agencies and provides data on trends in financial support of the research. Appendix B deals with biodiversity and its loss and expands on a briefer discussion in Chapter 2. Appendix C reproduces the proposal by the Committee for the National Institute for the Environment.

Concern for the environment and for environmental research has been reflected in several nearly coincident studies of different aspects of the field. A 1992 report of the American Association for the Advancement of Science, Federal Funding for Environmental R&D (Gramp et al. 1992), analyzes the

NATIONAL COMMISSION ON THE ENVIRONMENT: CHOOSING A SUSTAINABLE FUTURE

This report (Train, 1992) deals primarily with larger issues of environmental policy, prevention of pollution, and sustainable economic development and to only a small extent with organizing the federal government for environmental research. Many far-reaching recommendations focus on tax incentives and disincentives to reduce pollution, on management of subsidies to reduce water consumption, and on equity-citizen issues.

Regarding government organization that bears on environmental research, the commission proposes:

This report seeks to strengthen environmental research by building on and coordinating existing organizational structure. Major recommendations include (Carnegie, 1992a):

COMMITTEE FOR THE NATIONAL INSTITUTE FOR THE ENVIRONMENT

Part of the charge to our committee was to consider the establishment of a National Institute for the Environment as a means to improve environmental research. We present the proposal from the Committee for the National Institute for the Environment (CNIE) in the detail with which it was made available to this National Research Council committee at our last meeting in January 1993. The CNIE proposal continues to evolve, and its latest form should be consulted. We have included the CNIE proposal among the frameworks we have considered for the organization of environmental research in Chapter 5, as called for in our charge.

At the end of Chapter 5, we compare the recommendations of our report with those of the above reports and comment also on the pending legislation to elevate the EPA to cabinet status.

As this committee concluded its work, a new federal administration was actively proposing and implementing far-reaching changes in the organization of environmental research and policy. President Clinton moved almost immediately after he took office to abolish the CEQ and to establish in its place the White House Office of Environmental Policy to integrate environmental considerations into all aspects of decision-making by the Administration. Bills to elevate the EPA to cabinet level were introduced into the House of Representatives and Senate, and they moved ahead rapidly into the legislative process. Secretary of the Interior Bruce Babbitt has taken steps to reorganize environmental research, including creation of a National Biological Survey, in his department; another committee of the Research Council has been formed to advise the Department of the Interior in this regard. As these developments proceed in the months ahead, we hope that our report will inform decisions and illuminate implementation of actions already taken.

Next: 2 Perspective »
Research to Protect, Restore, and Manage the Environment Get This Book
× 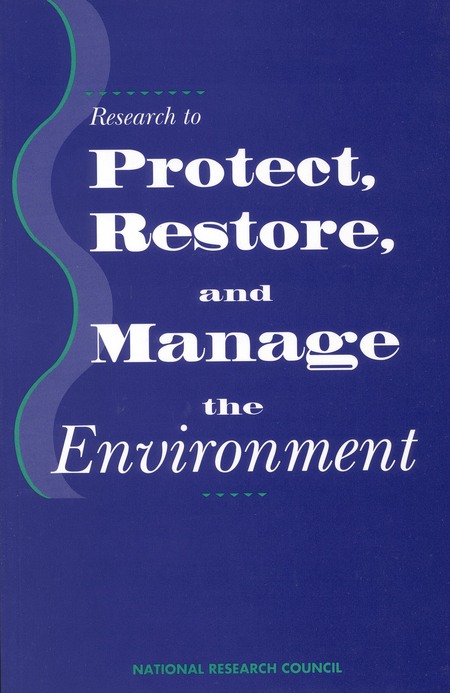