JOHN FRANK ELLIOTT 1920-1991 BY MORRIS COHEN jOHN F. ELLIOTT, one of the world s foremost authorities in the eld of metallurgy, died on April 15, 1991, at the age of seventy. He was the American Iron and Steel Institute Distinguished Professor of Metallurgy and director of the Mining and Mineral Resources Research Institute at the Massachusetts Institute of Technology (MIT). He was elected to the National Academy of Engineering in 1975 as a teacher, engineer, and scientist, who was responsible for major advances in metallurgical education, research, and processing. John was born on July 31, 1920, in St. Paul, Minnesota, and received his early eduction in northern Minnesota. He was awarded the S.B. in metallurgical engineering with high distinc- tion at the University of Minnesota in 1942. After becoming a lieutenant commander in the U.S. Navy during World War II, he enrolled as a graduate student at MIT and received the Sc.D. in metallurgy in 1949. He then joined the Fundamental Research Laboratory of the United States Steel Corporation as a physical chemist. Following this experience in industrial research, John joined the Inland Steel Company as a member of the research staff and was later appointed assistant superintendent of quality control of steelmaking. In 1955 he returned to MIT as associate professor of metallurgy and rose to full professorship in 1960. John's teaching and research at MIT established his intellec- tual leadership in chemical-process metallurgy. He and his 27

28 MEMORIAL TRIBUTES students published well over two hundred papers, covering ferrous process metallurgy, high-temperature chemistry of inor- ganic materials, and hot corrosion of metals en c! refractories, as well as the underlying chemical thermodynamics and kinetics. One of his major publications was a comprehensive two-volume compilation, Thermochemistry for Steelmaking. He was also in- volved with technological developments in the metallurgical processing industry and with the conservation of energy and raw materials, including the related environmental implications. In all these activities, ~ohn's achievements were acknowI- edged by many awards, invited lectureships, and honorary mem- berships. Among his more than a dozen prizes were the Robert W. Hunt Award of the American Institute of Mining, Metallurgi- cal, and Petroleum Engineers (AIME), the John Simon Guggenheim Memorial Fellowship at Imperial College in Lon- don, The Albert Easton White Distinguished Teacher Award of the American Society for Metals, the AIME Legion of Honor, and the Tawara Gold Medal of the Iron and Steel Institute of Japan. In addition to John's membership in the National Academy of Engineering, his honorary and fellow memberships included the American Academy of Arts and Sciences; the American Institute of Mining, Metallurgical, and Petroleum Engineers; the Metallurgical Society of AIME; the Iron and Steel Society of AIME; the Iron and Steel Institute of Japan; the Japan Institute of Metals; the American Institute of Chemical Engineers; the SocieclacI Venezolana de Ingenieros de Minas y Metalurgicos; and the American Association for the Advancement of Science. Among the honorary lectures given by John were the Howe Memorial Lecture of AIME, the Carter Memorial Lecture at the University of Strathclycle in Scotland, the Yukawa Lecture of the Iron and Steel Institute in Japan, the Extractive Metallurgy Lecture of AIME, the Zay Jeffries Lecture of ASM, and the Sir Julius Wernher Memorial Lecture of the Institution of Mining and Metallurgy in Great Britain. He also presented invited papers in Sweden, India, and Korea. In 1974 he served es visiting professor at the Tohoku University in Sendai, Japan, and in 1976 at the Simon Bolivar University in Caracas, Venezuela. He co- chaired the First Bilateral USA-China Metallurgical Conference

lOHN FINK ELLIOTT 29 in Beijing in 1978, and coeditecI the classic proceeding on Metallurgical Treatises in 1981. Perhaps the tribute that meant most to John was the Elliott Symposium on Chemical Process Metallurgy, organized by his students and colleagues and held at MIT in June 1990. It was a memorable occasion with featured papers on the future of process metallurgy in Asia, Australia, and Europe, as well as in the Americas. John participated actively throughout the sympo- sium and gave the final presentation on "Whither Chemical Metallurgy?" Another highlight of the event was the establish- ment of an endowed fund by the Iron and Steel Society and the Minerals, Metals, and Materials Society in support of a John F. Elliott Lectureship in Chemical Process Metallurgy, "to honor Professor Elliott for his many accomplishments, and for the leaclership he provided over a career spanning more than four clecades." Despite several life-threatening illnesses throughout his ca- reer, John demonstrated remarkable resolve to carry on with his way of life after each health crisis. Each time, he managed to resume his research en cl teaching, together with a vigorous schedule of world travel for conferences, honors, and invited lectures. He also remained] ever-clevoted to his family, students, ant! profession, alongwith his hobbies of gardening, sailing, and · . ~ music appreclatlon. Tragically, however, in December of 1990, fateful symptoms of a brain tumor were detected, and the end came for John in April of 1991. He is survive cI by his wife, Frances PendIeton Elliott; two children, William Stowe Elliott and Dorothy Elliott Sempolinski; and four grandsons. John Elliott liver! a life of purpose, fullness, and lasting achievement. He has left his indelible mark on the metallurgical rim . protesslon.

Next: Karl L. Fetters »
Memorial Tributes: Volume 6 Get This Book
× 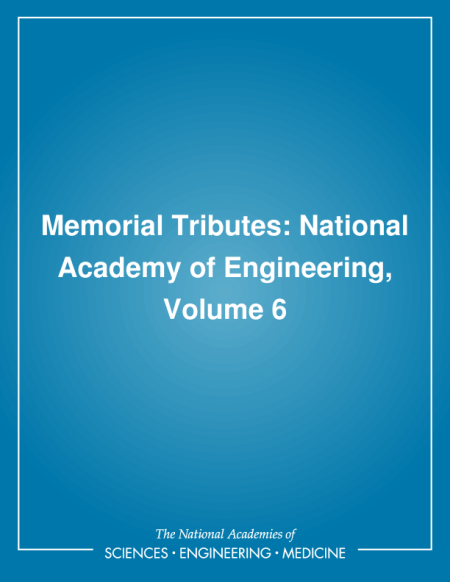