Visit NAP.edu/10766 to get more information about this book, to buy it in print, or to download it as a free PDF.
« Previous: Exploratory Use of Raster Images for Freight Modeling
Page 55 Share
Suggested Citation:"Disaggregate State Level Freight Data to County Level." National Academies of Sciences, Engineering, and Medicine. 2014. Innovations in Freight Demand Modeling and Data Improvement. Washington, DC: The National Academies Press. doi: 10.17226/22336.
×

Disaggregate State Level Freight Data to County Level Shih Mao Chin, Ho-Ling Hwang, and Francisco Moraes Oliveira-Neto Oak Ridge National Laboratory Presentation Notes: Presented by Ho-Ling Hwang, Oak Ridge National Laboratory. FAF2 provides comprehensive movement of freight among states and metropolitan areas by all modes. There are 123 domestic regions and eight foreign regions. To disaggregate the data, the commodity flow survey, county business patterns, and industry input-output accounts were used. The model was used to estimate ton-miles, as tonnage and the value of goods are important measures of freight activity. This also helps measure environmental impact and the revenue of transportation firms relative to the accounting of freight in tons transported by mile. The main disaggregation steps for the model were linking freight activities to economic activity, disaggregating the FAF3 data to the county level, and estimating the average shipment distance by mode based on multimodal network systems. The information was compared to other data sets for calibration based on ton-miles. Abstract As part of efforts to support Federal Highway Administration (FHWA) in its development of comprehensive national and regional freight databases and network flow models, researchers in the Center for Transportation Analysis (CTA) in the Oak Ridge National Laboratory (ORNL) constructed the Freight Analysis Framework (FAF) database. FAF data include freight flows for U.S. domestic and international (imports and exports). The main source of FAF is the Commodity Flow Survey (CFS), which is a shipper-based survey carried out every 5 years as part of the U.S. Economic Census. Given that the CFS does not contemplate all industry sectors and that a considerable portion of more detailed level data is undisclosed, FAF complements the CFS by estimating missing cells as well as by integrating other data sources for sectors not covered by the CFS scope. FAF products provide estimates of U.S. freight flows by aggregated levels of geographic detail, that is, as defined by the CFS with flows between states, major metropolitan areas, and the remainder of the states. This paper describes a disaggregation methodology that the CTA research team developed to transfer FAF zone-level freight estimates to the county level. This method relies on estimating disaggregation factors that are related to measures of production, attraction, and average shipment distances by mode. Production and attraction in counties are captured by their total employment payrolls. Travel distances of shipments between counties are calculated by using the CTA multimodal network system. Results from validation experiments have demonstrated the validity of this method. Moreover, this method was used in estimating the ton- miles for FAF, and comparisons with major freight data programs, specifically for rail and water movements, showed consistencies in results. 55

Freight Data The CFS is the most comprehensive survey of freight activities in the United States. The survey is conducted by the U.S. Census Bureau, in partnership with Bureau of Transportation Statistics (BTS) within the Research and Innovative Technology Administration (RITA) of the U.S. Department of Transportation (DOT). The latest survey was conducted in 2012, with previous years of study including 1992, 1997, 2002, and 2007. Data from the 2012 CFS will not be released until late 2014; thus, the latest available data are for 2007. The survey includes freight activities that originated in the United States; thus, it does not include the movement of imports. The sample survey of 2007 covered business establishments with paid employees located in the United States and classified according to the 2002 North American Industry Classification System (NAICS) industry codes in mining, manufacturing, wholesale trade, and select retail trade industries (e.g. electronic, stores, and mail-order houses). In addition, it also covered auxiliary establishments (e.g., warehouses and managing offices) of multi-establishment companies with shipping activity. FAF integrates CFS data with a variety of supplemental sources for industry sectors and movements not covered in the CFS (out-scope of the CFS) to create a comprehensive picture of freight movements among states, major metropolitan areas, and the remainder of states by all modes of transportation. FAF also provides forecasts on freight flows up to 30 years in the future, as well as annual provisional updates for the current year and truck flow assignments for the base year and outlying future year. The current release of FAF3 is the third database of its kind, with FAF1 providing similar freight data products for calendar year 1997, and FAF2 providing freight data products for calendar year 2002. Under the FAF3 process, the CTA team provided estimates of ton-miles for freight flows using network system and freight flow models, including the detailed multimodal and intermodal freight network databases. Specifically, these databases include transportation network systems (highways, railroads, waterways, airways, and pipelines) and their associated infrastructure (e.g., intermodal terminals, transfer points, seaports, and airports). Disaggregation Method Fundamentally, to disaggregate FAF freight flows from FAF zones to more detailed geography, one needs to estimate the relationship between freight generation and industry activities within zones; this is done through freight modeling. As suggested in Oliveira-Neto et al. (2012), aggregate generation (production and attraction) models were estimated using available data from CFS at the state level. These generation models also considered the association between industry producers and consumers of commodities, as observed in the 2007 Input-Output Accounts, and were applied to estimate freight shipped/received by county. Likely shipment distances by mode between counties were estimated by using routing routines with the CTA intermodal network system. The routing algorithm used impedance functions to route shipments onto the network system. The impedance functions considered functional categories (e.g., major and local roads) of the link, the interactions between different 56

companies (i.e., railroad companies) or vehicles (e.g., different vessel categories), as well as intermodal and multimodal operations in transfer points and terminals. A route for a single mode was generated using a shortest path algorithm that finds the minimum impedance between county centroids. If multiple modes or vehicles were used, the algorithm would find minimum routes connecting different sub-networks through terminal and transfer points. County distance matrices were used not only to calculate ton-miles; they were also applied to find the spatial distribution of freight generated. In this case, a gravity model was applied to generate freight flows between counties. In sum, the disaggregation process of FAF database includes 1. Estimate total freight shipped and received by county. For a given FAF originâ destination (O-D) pair, production and attraction shares for tons are estimated for the set of counties within the FAF zones O and D, respectively. 2. Distribute the total freight shipped/received between counties. The technique for freight distribution relies on matrix balancing procedures, or a doubly constrained gravity model. Two methods were deployed to obtain the disaggregation coefficients for the models. The first one was based on traditional two-step modeling, which aimed to estimate descriptive freight generation models and distribution models separately. The second approach for estimating the parameters was to combine the data into a pooled cross-section structure, from which a combined generation-distribution model was estimated. Final Remarks In this paper, a disaggregation methodology used for the FAF3 data processing is discussed. This method was applied to disaggregate data from FAF-zone level to associated county-level geography. This method was developed as a part of the FAF ton-mile estimation effort. As an added value, the team considered the method developed could be applied to generate information that supports transportation freight analysis and planning at a more reasonable level of detail than FAF zones. Validation results of these models suggested that techniques presented in this paper provided consistent results for macroanalysis in transportation planning. In summary, the framework for national freight data (i.e., the FAF database) as well as the analytical and geographic tools (CTAâs network system and the freight flow models) presented in this paper can be used for estimating the generation and spatial distribution of goods in the United States at the county level of geography. The estimation of freight ton-miles is an import application of such tools to gauge the freight system usage and provide insightful information for national policy decisions. 57 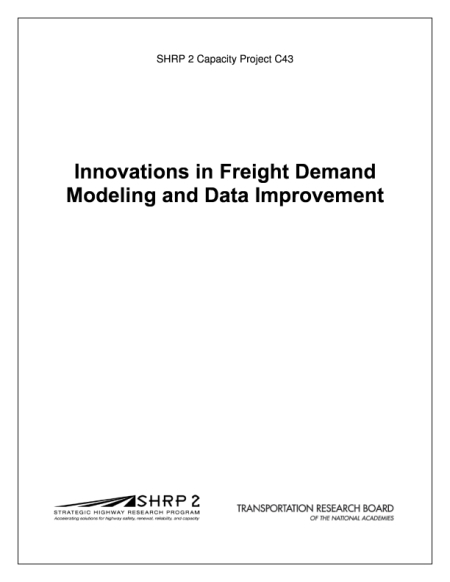