Environmental Science in the Coastal Zone: Issues for Further Research (1994)

Get This Book
Visit NAP.edu/10766 to get more information about this book, to buy it in print, or to download it as a free PDF.
Page i Share Cite
Suggested Citation:"Front Matter." National Research Council. 1994. Environmental Science in the Coastal Zone: Issues for Further Research. Washington, DC: The National Academies Press. doi: 10.17226/2249.
×

ENVIRONMENTAL SCIENCE IN THE COASTAL ZONE

The National Academy of Sciences is a private, non-profit, self-perpetuating society of distinguished scholars engaged in scientific and engineering research, dedicated to the furtherance of science and technology and to their use for the general welfare. Upon the authority of the charter granted to it by the Congress in 1863, the Academy has a mandate that requires it to advise the federal government on scientific and technical matters. Dr. Bruce Alberts is president of the National Academy of Sciences.

The National Research Council was organized by the National Academy of Sciences in 1916 to associate the broad community of science and technology with the Academy’s purposes of furthering knowledge and advising the federal government. Functioning in accordance with general policies determined by the Academy, the Council has become the principal operating agency of both the National Academy of Sciences and the National Academy of Engineering in providing services to the government, the public, and the scientific and engineering communities. The Council is administered jointly by both Academies and the Institute of Medicine. Dr. Bruce Alberts and Dr. Robert M. White are chairman and vice chairman, respectively, of the National Research Council.

Cover art provided by Eileen Kiliman, a native of White Plains, New York, living in Front Royal, Virginia. Earned a BBA in Marketing and a Certificate in Commercial Art from Pace University in New York. After eight years of representing graphic design firms, she has made her lifetime love of art a full time profession receiving a variety of commissions. Her style projects childhood observations combined with adult introspection.

COMMISSION ON GEOSCIENCES, ENVIRONMENT, AND RESOURCES

On June 25-26, 1992, the National Research Council's (NRC) Commission on Geosciences, Environment, and Resources (CGER) held a retreat on "Multiple Uses of the Coastal Zone in a Changing World" at its Jonsson Study Center in Woods Hole, Massachusetts. The purpose of the retreat was to bring together a diverse group to assess the dimensions of our scientific knowledge as it applies to social and environmental issues in the coastal zone.

People have always been drawn to coastal areas for food, commerce, and recreation. Over the past half century, increases in the coastal population and accelerated land use changes have threatened key ecosystem functions that are necessary to maintain plant and animal communities, the quality and quantity of our water supplies, and our ability to harvest the historically abundant natural resources from our bays, estuaries, and the oceans within our coastal waters.

Population and economic activity continue to concentrate in the coastal zone. The stakes riding on future management decisions affecting the coastal zone are large. On the one hand, traditional management approaches have not been adequate to halt environmental degradation and associated losses. On the other, significant economic and social costs are associated with many of the protective measures proposed, such as controlling point and nonpoint sources of pollution, imposing limits on fish harvests, or restricting coastal development. Given the complexity of the scene, there is a clear need for the scientific, managerial, and policy communities to surmount traditional barriers to support a more integrated approach to inform and guide decisions in the coastal zone.

A steering committee of commission members, working closely with CGER staff, organized and hosted the retreat. Karl Turekian acted as retreat chair. Ten papers were presented by recognized experts in the fields of ecology, oceanography, meteorology, marine biology, hydrology, geomorphology, and public policy. The preparation of the papers was carefully monitored by the steering committee. The fifty attendees participated in workshops that examined different aspects of the coastal zone—weather/climate, ocean circulation, geomorphology, rivers/estuaries, wetlands, land use, pollution, and public policy and institutional arrangements. Facilitators and scribes were selected to stimulate debate and discussion in the workshops and to record the key issues identified by each group. Following the retreat, a working group, led by Donald Boesch, helped pull together the ideas and recommendations from the retreat.

The report has two major sections: an overview and the background papers by individual authors. The overview represents a collaborative effort by the working group, commission members, and NRC staff based on a review of the papers and the major issues discussed at the retreat. The

entire report has been read by a group other than the authors, but only the overview has been subjected to the report review criteria established by the National Research Council's Report Review Committee. The background papers have been reviewed for factual correctness and edited.

The Commission on Geosciences, Environment, and Resources gratefully acknowledges the generous contributions of time and expertise of the retreat participants. Special thanks are extended to those who made formal presentations, acted as facilitators to stimulate discussion, or served as scribes in the workshops. It is hoped that the discussions presented here will stimulate new ideas and research, suggest some starting points for a more holistic approach to broad resource and environmental issues in the coastal zone, and perhaps form the basis for further inquiry of specific issues by units of the NRC.

ENVIRONMENTAL SCIENCE IN THE COASTEL ZONE:

Next: 1 Overview »
Environmental Science in the Coastal Zone: Issues for Further Research Get This Book
× 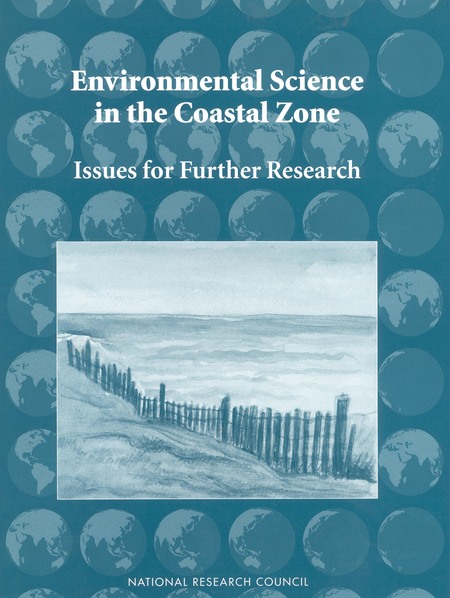 This book assesses the dimensions of our scientific knowledge as it applies to environmental problems in the coastal zone. The volume contains 10 papers that cover different aspects of science, management, and public policy concerning the coastal zone. A consensus is presented on several key issues confronting science for developing a more holistic approach in managing this region's intense human activities and important natural resources.