Visit NAP.edu/10766 to get more information about this book, to buy it in print, or to download it as a free PDF.
« Previous: Chapter Five - Effective Practices in Developing and Managing Mutual Aid Agreements
Page 23 Share
Suggested Citation:"Chapter Six - Conclusions ." National Academies of Sciences, Engineering, and Medicine. 2013. Model Mutual Aid Agreements for Airports. Washington, DC: The National Academies Press. doi: 10.17226/22542.
×

24 contractual agreement with a town to receive benefit indirectly from the townâs mutual aid agreements with other partners. Because each emergency is unique, flexibility is essential, so written agreements must be carefully developed to protect sufficient flexibility while ensuring predictability of action. State laws, local ordinances, or the advice of counsel may require agreements to be written or verbal, and agreements may also need to conform to the specific governance struc- ture of the airport. AMBIGUITIES OF INTEREST OR CONCERN The most interesting ambiguity discovered in this study is the clear split among airports in their attitudes towards the legal and liability issues associated with mutual aid. Some airports, on the advice of their lawyers, avoid all mutual aid agreements or avoid written agreements. On the other hand, some airports embrace written mutual agreements as a way to define and control liability issues. Many states have legislation enabling mutual aid agreements, and such legislation typically has lan- guage controlling liability during mutual aid activities. A second issue of interest deals with reimbursement. To ensure clarity, if an agreement involves reimbursement, it will usually take the form of a contract as opposed to a mutual aid agreement. The final issue of interest is the extent to which mutual aid agreements may involve the airport sending assistance off-site. FAA Advisory Circular 150/5200-31C changed the game by urging airports to make aid agreements more mutual and less one-sided: that is, the agreements should become more reciprocal rather than simply seeking outside aid for the airport. This issue can be resolved by including clauses about maintaining the airportâs index or a phrase such as âas allowed by the airportâs operational situation.â EVALUATING EFFECTIVENESS OF MUTUAL AID AGREEMENTS Measuring the overall effectiveness of written or unwritten agreements could prove difficult. Agreements are not time- less, and overall effectiveness may relate to the response and recovery from a specific event whose variables could not be accounted for during the utilization of the mutual aid. There- fore, it would be difficult to measure efficacy during normal operating periods, and the evaluation of the agreement dur- ing a crisis would be especially difficult. Agreements need to be reviewed periodically for clarity and to reflect changes in response and recovery efforts based on recent drills, regulatory changes, and discovery of effective management practices. FURTHER RESEARCH Six areas for further research are suggested: 1. Legal research into liability. Although most airports in the study have resolved this to their satisfaction, it still remains an issue for some. 2. Enabling legislation for mutual aid agreements or state- wide regional emergency management pacts, and the procedures for airports becoming involved in them. 3. Methods and metrics for evaluating the effectiveness of mutual aid agreements and the actions taken under them. 4. Exploration of how mutual aid agreements might be extended into the mitigation and recovery phases of emergency management. 5. Relationship-building and communications to sustain vibrant mutual aid agreements over time. This includes succession planning within an airport so that mutual aid programs do not suffer when a âchampionâ leaves the airport. 6. Continuity of operations and airport resiliency as they relate to mutual aid.

Next: Glossary »
Model Mutual Aid Agreements for Airports Get This Book
× 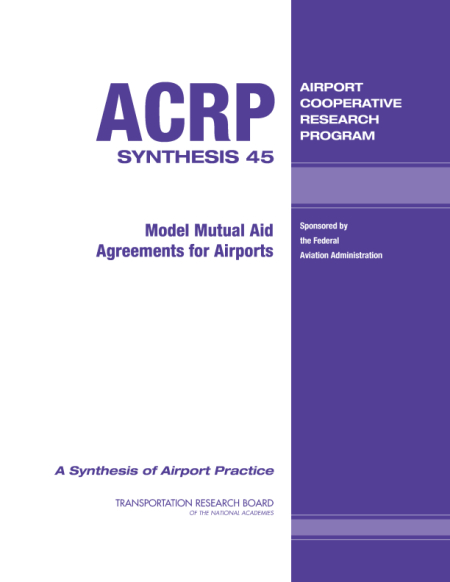