Visit NAP.edu/10766 to get more information about this book, to buy it in print, or to download it as a free PDF.
« Previous: Chapter 3 - Review of Guidelines and Regulations for Dry Ice Shipments
Page 14 Share
Suggested Citation:"Chapter 4 - Review of Aircraft Manufacturer Guidelines and Procedures." National Academies of Sciences, Engineering, and Medicine. 2013. Technical Assessment of Dry Ice Limits on Aircraft. Washington, DC: The National Academies Press. doi: 10.17226/22651.
×

14 C h a p t e r 4 There are two principal manufacturers of full-sized jet air- craft: Airbus and Boeing. Battelle contacted both manufac- turers to obtain information relevant to the carriage of cargo containing dry ice and the determination of limits for the use of dry ice on board aircraft. Information from Airbus Airbus has a publication that addresses in detail the carriage of dry ice.27 The publication reviews the Airbus understand- ing of applicable technical information and regulations related to carbon dioxide and dry ice. Although this publication does not provide an Airbus-approved limit for the amount of dry ice that can be carried, it does examine the technical and regu- latory basis for setting such limits and the method for calcu- lating them. This publication also provides data on the cargo compartment volumes and ventilation rates for various Airbus aircraft. The Airbus guidance proposes that the maximum concen- tration in the cargo hold not exceed 5,000 ppm. Two meth- ods of setting limits on the mass of dry ice are proposed, one for ventilated cargo holds and one for unventilated cargo compartments. For ventilated cargo compartments, two situations are considered: one where the aggregate quantity of dry ice in the compartment is less than 45 kg, and one where a single package contains more than 45 kg. If the aggregate quantity of dry ice is less than 45 kg, the assumed sublimation rate, based on the initial inventory, is 2% per hour. If the quantity of dry ice in the single package is greater than 45 kg, a sublimation rate of 1% per hour is assumed. The assumed sublimation rate is then used in conjunction with the number of air exchanges per hour and the volume of the com- partment to ensure that the final concentration in the cargo compartment does not exceed 5,000 ppm. For an unventilated cargo compartment, the total volume of carbon dioxide generated over the duration of the flight must be limited to the volume of the cargo compartment times 0.005, representing a final concentration of 5,000 ppm. Overall, the Airbus guidance recommends using 200 kg of dry ice per cargo compartment as a general limit. However, since any limit is the sole responsibility of the operator, Air- bus notes that the operator can have a written agreement with a shipper for a different limit. Information from Boeing Boeing has prepared general information that describes the operation of the environmental control system (ECS) on Boeing aircraft.28, 29 With regard to carriage of dry ice, Boeing has prepared a presentation on the calculation of allowable dry ice loads30 and a more recent service letter with recommended allowable dry ice carriage limits.31 The Boeing presentation contains an equation for the cal- culation of acceptable dry ice loads based on the mass of dry ice and a mass-based sublimation rate; the calculation takes into account the carbon dioxide generated by the occupants in the passenger cabin. It also conservatively assumes that all of the carbon dioxide generated from sublimation of shipments of dry ice is distributed to the passenger cabin. The Boeing service letter presents additional information in the form of graphs showing the maximum suggested dry ice load for various aircraft models and for various assumed sublimation rates in percent of weight per hour. The service letter also suggests different sublimation rates based on the type of packaging. For example, for a 23-kg (50-lb) block of dry ice wrapped in paper and exposed to an ambient tem- perature of -18Â°C, a sublimation rate of 2% per hour is sug- gested; if the ambient temperature condition is increased to 24Â°C, the recommended rate is 3% per hour. A sublimation rate of 3% per hour is also used if the same size dry ice block, but without any insulation, is exposed to an ambient temperature of -18Â°C. The rate increases to 4% per hour if the ambient temperature is 0Â°C, and to 6% at 24Â°C. Review of Aircraft Manufacturer Guidelines and Procedures

15 In addition to presenting graphs of the mass limits for dif- ferent assumed sublimation rates, Boeing presents additional curves according to the number of air conditioning packs operating. To give one example, according to the Boeing graphs, for a 1% sublimation rate, the maximum dry ice load on a 757 pas- senger aircraft is 725 kg; on a 757 freighter the maximum dry ice load is 2,835 kg. If the sublimation rate were 2%, then the maximum dry ice load limits would be cut in half. As with Airbus, Boeing provides guidance but states that it is the responsibility of the carrier to establish dry ice limits for their airplanes. Information on Regional Jets Regional jets are smaller than full-sized aircraft and have correspondingly smaller cabins and cargo compartments. Bombardier and Embraer are the two principal manufacturers of regional jets. Both Bombardier and Embraer were contacted as part of this study, but neither elected to provide information. Because of their small size and the limited amount of cargo- carrying capacity, regional jets do not carry much freight, and the question of dry ice limits for such aircraft was judged to be of secondary importance.

Next: Chapter 5 - Review of Air Carrier Procedures for Shipments Containing Dry Ice »
Technical Assessment of Dry Ice Limits on Aircraft Get This Book
× 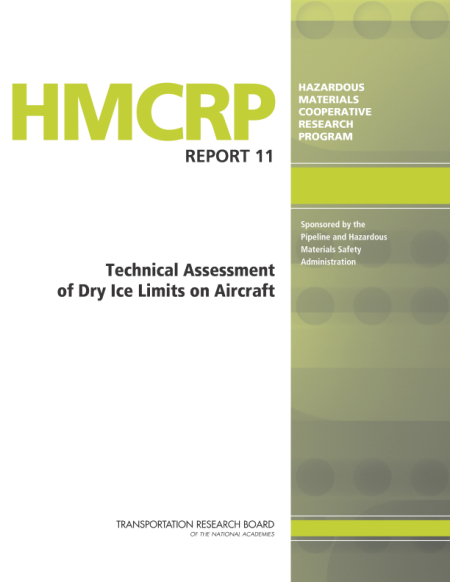 The report includes guidelines for helping to determine safe limits for carriage of dry ice on commercial airplanes and a CD-ROM-based software tool designed to assist in determining appropriate dry ice loadings. The CD-ROM is packaged with the print version of the report.

The CD-ROM is also available for download from TRB’s website as an ISO image. Links to the ISO image and instructions for burning a CD-ROM from an ISO image are provided below.

(Warning: This is a large file and may take some time to download using a high-speed connection.)

CD-ROM Disclaimer - This software is offered as is, without warranty or promise of support of any kind either expressed or implied. Under no circumstance will the National Academy of Sciences or the Transportation Research Board (collectively "TRB") be liable for any loss or damage caused by the installation or operation of this product. TRB makes no representation or warranty of any kind, expressed or implied, in fact or in law, including without limitation, the warranty of merchantability or the warranty of fitness for a particular purpose, and shall not in any case be liable for any consequential or special damages.