Advancing the Discipline of Regulatory Science for Medical Product Development: An Update on Progress and a Forward-Looking Agenda: Workshop Summary (2016)

Get This Book
Visit NAP.edu/10766 to get more information about this book, to buy it in print, or to download it as a free PDF.
« Previous: 1 Introduction
Page 5 Share Cite
Suggested Citation:"2 Characterizing the Regulatory Science Landscape." National Academies of Sciences, Engineering, and Medicine. 2016. Advancing the Discipline of Regulatory Science for Medical Product Development: An Update on Progress and a Forward-Looking Agenda: Workshop Summary. Washington, DC: The National Academies Press. doi: 10.17226/23438.
×

In considering ways to further advance the discipline of regulatory science, the workshop focused on ways in which information can be best generated, analyzed, integrated, and shared across regulatory science applications. In the opening session, workshop co-chair Alastair Wood, partner, Symphony Capital, and Professor of Medicine and Pharmacology, Weill Cornell School of Medicine, observed that there has been an explosion in the information available to the regulator that did not exist even 2 or 3 years ago. “We used to live in a data-poor, opinion-rich environment—now,

we live in a data-rich, opinion-rich environment,” he said. Wood asked the workshop participants to consider how the field can progress toward achievable endpoints and to accomplish real, implementable change.

The discipline of regulatory science is grounded in a fundamental knowledge of basic and clinical science and medicine. Those involved in the regulatory science discipline could integrate an array of complex issues: in addition to having command over the science, they could have a working knowledge of governmental legislation and regulations, as well as of industry and academic standards and policies. In addition, they must be able to effectively communicate such complexities across diverse segments of society, said Mark C. Rogers, board chairman, Reagan-Udall Foundation. Jim Stevens, Distinguished Research Fellow, Eli Lilly, also emphasized the importance of the regulatory scientist’s ability to integrate information longitudinally across dimensions. “We need to interpret data in a context of prior and future experience,” he said, and “we need to be able to link known and unknown biology with safety outcomes.” Stephen Ostroff, acting commissioner, FDA (at the time of the workshop), and workshop keynote speaker, noted that to accomplish these challenges, it would prove valuable for the greater scientific and clinical ecosystem to think broadly about the definition of the regulatory science endeavor, beyond FDA functions.

As the nation’s principal consumer product protection agency and promoter of the nation’s public health and health care systems, FDA serves as the linchpin of regulatory science. In its 2007 report FDA Science and Mission at Risk (FDA, 2007), the FDA Science Board concluded that FDA was suffering from scientific deficiencies and an inability to meet current and emerging responsibilities. Ostroff noted that since the report was issued in 2007 FDA has been the subject of increased regulatory responsibilities aimed at bolstering science at the agency.1 Ostroff observed that a follow-up 2015 FDA Science Board report Mission Possible: How FDA Can Move at the Speed of Science took note of progress at the agency. “The responsiveness of FDA to the Mission at Risk report and those responsible for overseeing its work has been extensive, transformative, and laudable. Many substantive changes have been made in FDA’s organization, authorities,

1 Ostroff cited a number of initiatives as new or potential legislative mandates, including the FDA Amendments Act of 2007 (2007); the Tobacco Control Act (2009); the Food Safety Modernization Act (2011); the FDA Safety and Innovation Act (2012); the Drug Quality and Security Act (2013); and the U.S. House of Representatives’ 21st Century Cures Act and the U.S. Senate’s Medical Innovation Act (2015).

In addition to its accolades, the 2015 Mission Possible report included several recommendations for the agency. The recommendations addressed opportunities for improvement in the following areas:

Ostroff summarized the report’s recommendations with the following perspective, “We [at FDA] need to study and support development of innovative ways to streamline, supplement, and speed medical product availability without having any negative impact on what we consider to be the FDA gold standard of being able to evaluate product efficacy and safety.”

Numerous workshop participants stressed that rigorous evaluation of the contemporary state of regulatory science will be instrumental in dynamically regulating the scientific and medical enterprises of the future. Many participants noted the difficulty in objectively evaluating regulatory science because it is not assessed by traditional scientific measures such as statistical analyses or peer-reviewed literature. Therefore, they suggested that the public health impact of regulatory decisions could serve as a benchmark for evaluating the effectiveness of certain regulatory science initiatives. In turn, there was support for the concept of integrating a process that allows regulatory science to respond in real time and learn from past or ongoing experiences within FDA’s data and evaluation systems. Frank Weichold, director, Science and Innovation, Office of the Chief Scientist/Office of the Commissioner, FDA, commented that FDA has started to implement such a learning system of regulatory science with its inclusion of adaptive regulation, such as the use of accelerated pathways. Ostroff noted that the agency needs to continue to incorporate innovative decision-making methods to both supplement and support more traditional methodologies.

Workshop participants discussed specific areas of regulatory science on which to focus development and how to best adopt any changes. Ostroff noted that in Mission Possible the FDA Science Board offered recommendations related to the continued development of tools and methodologies that could be of applied value in regulatory decision making, such as advancing biomarkers, enhancing data mining and analytical tools, developing in silico modeling, and facilitating extramural collaborations. Stevens emphasized, however, that simply developing these tools is not sufficient to ensure their adoption. He reminded the audience that incentives must be in

place for organizations to adopt new technologies or share data, and that organizational management is essential to achieve transformation. Stevens cited Leavitt’s Diamond—a model for organizational change management that states that technology, tasks, and the organization are all interdependent and should be managed together—to caution that if implementation of such tools is handled poorly and the dynamic tensions created by these interdependencies are not taken into account, negative tension may be created within an organization.

THE ROLE OF DATA SCIENCE IN REGULATORY SCIENCE: A CASE STUDY IN COLLABORATION

mission-driven focus, Altman and his CERSI colleagues reached out to FDA to explore potential collaborative projects that FDA would find meritorious and that would allow for the application of skills and resources available at Stanford and UCSF. Altman observed that the proposals received from FDA revealed that FDA recognizes that informatics and data science can create an important, immediate, and positive impact on regulatory science. Based on those proposals and additional conversations with European and U.S. regulatory agencies, the CERSI leadership identified 10 key examples of data science themes in regulatory science (see Box 2-1). 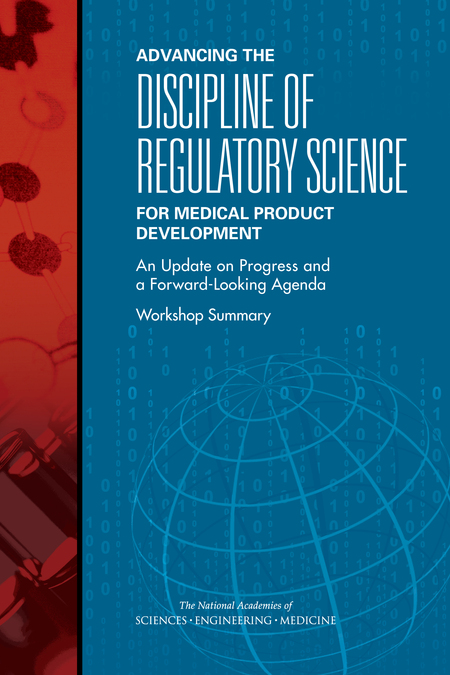 The field of endeavors known as "regulatory science" has grown out of the need to link and integrate knowledge within and among basic science research, clinical research, clinical medicine, and other specific scientific disciplines whose focus, aggregation, and ultimate implementation could inform biomedical product development and regulatory decision making. Substantial efforts have been devoted to defining regulatory science and communicating its value and role across the scientific and regulatory ecosystems. Investments are also being made in technology infrastructure, regulatory systems, and workforce development to support and advance this burgeoning discipline.

In October 2015, the National Academies of Sciences, Engineering, and Medicine held a public workshop to facilitate dialogue among stakeholders about the current state and scope of regulatory science, opportunities to address barriers to the discipline's success, and avenues for fostering collaboration across sectors. Participants explored key needs for strengthening the discipline of regulatory science, including considering what are the core components of regulatory science infrastructure to foster innovation in medical product development. This report summarizes the presentations and discussions from the workshop.