Get This Book
Visit NAP.edu/10766 to get more information about this book, to buy it in print, or to download it as a free PDF.
« Previous: Appendix C: Committee and Staff Biographies
Page 133 Share Cite
Suggested Citation:"Appendix D: Glossary." National Academies of Sciences, Engineering, and Medicine. 2017. Approaches to Understanding the Cumulative Effects of Stressors on Marine Mammals. Washington, DC: The National Academies Press. doi: 10.17226/23479.
×

Accommodation – A response of a biological system to an environmental stressor that restores the system to its normal or baseline condition or establishes a new set point.

Acute Effect – The severe, often lethal, effect of a stressor on an individual that occurs rapidly and is of short duration (see also Chronic Effect).

Acute Exposure – Exposure to a stressor that occurs for a single, discrete period of time (see also Chronic Exposure and Intermittent Exposure).

Adverse Outcome Pathways – A structured representation of biological events leading to adverse effects that is often considered in risk assessments.

Aggregate Exposure – The combined exposure to one stressor from multiple sources or pathways integrated over a defined relevant period: a day, season, year, or lifetime.

Allostatic Load – An organism’s cumulative physiological degradation resulting from exposure to stressors, as well as from heightened activity of physiological systems or changes in metabolism.

Bias – The difference between a true population parameter and the expected value of the estimate of that parameter (see also Precision).

Chronic Effect – A stressor effect that does not immediately result in death or reproductive failure, but persists or is irreversible, and may influence long-term survival or reproductive success.

Cumulative Risk – The combined risk from exposures to multiple stressors integrated over a defined relevant period: a day, season, year, or lifetime.

Dose – The magnitude or amount of a stressor that is directly experienced or ingested, inhaled, or absorbed by an animal, ideally measured by a dosimeter on the animal.

Dose–Response Relationship – The relationship between the amount of exposure (dose) to a stressor and the resulting changes in behavior, physiology, or health (response).

Driver – A biotic or abiotic feature of the environment that affects populations directly and/or indirectly by changing exposure to a single (or multiple) extrinsic stressor.

Ecological Driver – A biotic or abiotic feature of the environment that affects multiple components of an ecosystem directly and/or indirectly by changing exposure to a suite of extrinsic stressors. Ecological drivers may operate on multiple species at varying trophic levels, and may affect multiple ecosystems.

Exposure – Contact with or experience of a stressor, ideally measured in the environment near the animal.

Health – The ability of an organism to adapt and self-manage.

Hearing Threshold – The lowest intensity of a sound at a particular frequency that an organism is able to hear. These thresholds are defined as a function of frequency.

Homeostasis – The tendency of the physiological systems of an organism to maintain internal stability in response to stimulus that might disturb its normal condition or function.

Interactions Among Stressors – Interactions occur when the presence of one stressor changes the shape of the dose–response function of the other stressor (see also Additive Stressor Effect).

Intermittent Exposure – Exposure to a stressor that occurs intermittently, repeatedly, or in cycles (see also Acute Exposure and Chronic Exposure).

Intrinsic Stressor – An internal factor or stimulus that results in a significant change to an animal’s homeostatic set point. Short-term internal stresses that evoke physiological responses occurring daily to maintain an organism near its homeostatic set points are not considered stressors, but natural aspects of an individual’s life cycle (e.g., lactation, migration, molting, and fasting) that result in significant changes to homeostasis are considered stressors (see also Extrinsic Stressor and Stressor).

Noise – Sounds that are unwanted by or are not useful for a receiver.

Oxidative Stress – Stress to an organism caused by a disturbance in the balance of prooxidants and antioxidants.

Population Health – The distribution of health outcomes in a population or a subset of a population, as well as the determinants or factors that influence those outcomes.

Precision – A statistical measure of the repeatability of a sample or an estimate, given by the inverse of the variance (see also Bias).

Recovery – Restoration of normal function after withdrawal of a stressor.

Stressor – Any causal factor or stimulus, occurring in either the animal’s internal or external environment, that challenges homeostasis of the animal. 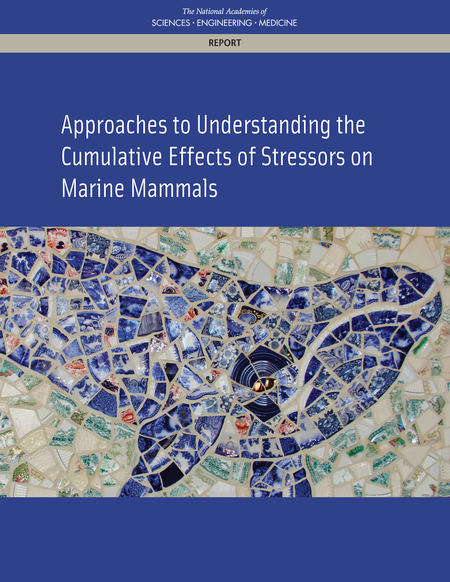 Marine mammals face a large array of stressors, including loss of habitat, chemical and noise pollution, and bycatch in fishing, which alone kills hundreds of thousands of marine mammals per year globally. To discern the factors contributing to population trends, scientists must consider the full complement of threats faced by marine mammals. Once populations or ecosystems are found to be at risk of adverse impacts, it is critical to decide which combination of stressors to reduce to bring the population or ecosystem into a more favorable state. Assessing all stressors facing a marine mammal population also provides the environmental context for evaluating whether an additional activity could threaten it.

Approaches to Understanding the Cumulative Effects of Stressors on Marine Mammals builds upon previous reports to assess current methodologies used for evaluating cumulative effects and identify new approaches that could improve these assessments. This review focuses on ways to quantify exposure-related changes in the behavior, health, or body condition of individual marine mammals and makes recommendations for future research initiatives.