Get This Book
Visit NAP.edu/10766 to get more information about this book, to buy it in print, or to download it as a free PDF.
« Previous: Appendix B: Public Forum
Page 148 Share Cite
Suggested Citation:"Appendix C: Use of Activated Carbon Adsorption Systems for Exhaust Gas Cleaning." National Research Council. 1994. Recommendations for the Disposal of Chemical Agents and Munitions. Washington, DC: The National Academies Press. doi: 10.17226/2348.
×

Incineration technologies produce large volumes of gaseous emissions containing trace amounts of impurities. In the case of the Chemical Stockpile Disposal Program, these impurities may consist of residual agent or non-agent materials. Both have the potential of causing chronic health effects. The amount of these impurities can be greatly reduced by passing all effluent gas through an activated carbon (charcoal) adsorption bed (the method used in gas masks) before discharging the gas.

Because of its high surface area, activated carbon has the ability to selectively adsorb and retain certain types of molecules on the internal surfaces of tiny pores and interstices of its granules. The selectivity and capacity for adsorption depend on the method of carbon production or activation, and can be very high for removal of agents and chlorinated hydrocarbons.

Activated carbons are typically manufactured by heating carbonaceous materials such as nut shells or coke to a high temperature in the presence of an oxidizing gas such as steam or dilute oxygen. They can have an extremely high surface area (500-1,200 square meters per gram) in the many small pores that are formed. These pores adsorb ambient molecules on their surface, and for the contaminants of interest, as much as 20-50 percent of the activated carbon weight can be adsorbed before saturation. However, for the very low concentrations expected with waste gas from stockpile disposal, the amount adsorbed is less and is proportional to the concentration of contaminant, which might be around 1 percent of the carbon weight.

Industrial gas filtration processes commonly employ several sequential vertical beds of charcoal, each several inches thick. They have gas velocities of 1 foot per second or less to ensure essentially complete removal (adsorption) of organic compounds from the waste stream. Metals leaving a system in the form of particulates are also removed by the charcoal. (The

ventilation air filtration system at Tooele has six beds of charcoal.) The space in between beds allows for gas flow redistribution and gas sampling equipment, to permit analysis of the gas as it flows through the beds. (Gas analysis following the second, fourth, and final beds is typical.) Provisions to provide bed bypass or diversion of gas to alternate beds to allow bed replacement without overall system shutdown are typical in engineered systems.

The results of these design considerations are that a typical charcoal filter system for a chemical agent and munitions processing plant the size of Tooele might be 20 feet by 20 feet square (or equivalent in smaller units) by 50 feet long, containing on the order of 30 tons of charcoal.

Contaminants are quickly adsorbed in the upstream portion of the first bed, and work their way through it and subsequent beds as illustrated in Figure C-1.

Initially, the carbon becomes saturated in the upstream part of the first bed but it drops to an extremely low-level at further distances from the leading face, so that contaminants in the gas leaving the first bed are below the level of detection. At a later time, the drop-off occurs further along in subsequent beds. If the concentration was monitored downstream of the second bed, ''breakthrough'' of contaminant when detected there would indicate that it was time to replace or regenerate the carbon in the preceding beds.

The speed at which breakthrough travels through the bed increases as gas velocity and temperature are increased, and is faster for less strongly adsorbed contaminants.

The velocity of the breakthrough wave and the depth of the bed determine time to breakthrough. For low concentrations of high molecular weight contaminants, such as agents and dioxins, this time can be designed to be on the order of several months. This duration easily allows adequate time for chemical analyses between the beds to certify contaminant removal and to determine breakthrough upstream of the final bed with adequate time for bed replacement or other remedial action. The system therefore approaches the desirable features of "closed-loop" systems in that contaminants are stored on the charcoal until removed for regeneration or disposal. A charcoal bed followed by gas storage has also been suggested. The committee believes that the charcoal bed, storing the contaminants, eliminates the need for gas storage. 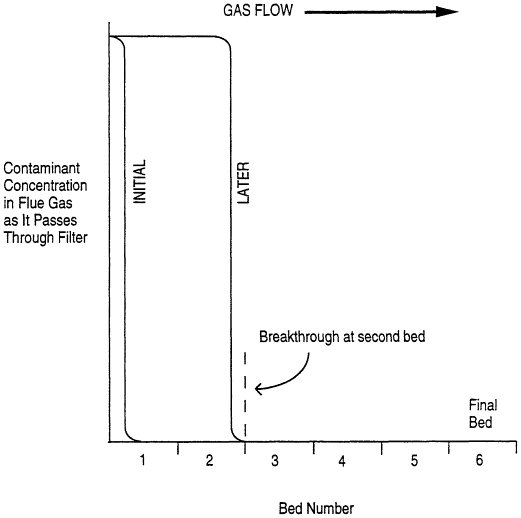 The current agent monitoring system produces frequent false alarms (NRC, 1994a) due to non-agent molecules that are counted as agent. Use of charcoal adsorption will significantly reduce these compounds and should greatly reduce false alarms in the exhaust gases.

Liquid water, if present in the pores, can effectively eliminate the adsorption capacity of the filled pores. Gases are therefore adjusted to less than 50 percent relative humidity. This is accomplished by either heating the gases to reduce the relative humidity or cooling the gases to condense the water, followed by heating. Flue gases, which have been water quenched and scrubbed, contain large amounts of water (typically around 5 percent) and must be dried—generally by cooling—and then reheated. However, for ventilation air, simple heating will suffice. Since cooling and water condensation are expensive, it is desirable to minimize this activity. However, doing so leaves a higher exit gas dew point (the point at which water will condense) because of the higher water concentration and requires the gas to be reheated to a higher temperature to avoid condensation problems.

As the exit gas temperature is increased, the adsorptive capacity of the charcoal decreases, time to breakthrough decreases, and the probability of hot spots or fires is increased. The optimum temperature will then depend on the specific application. For example, the Hugo Peterson company in Germany (U.S. Army, 1993b) designs and manufactures activated charcoal filters for flue gas treatment. Typical operating temperatures are in the range of 120-130ºC (250-265ºF). Even at this relatively high temperature, the concentrations of dioxins and furans are reduced by a factor of 50 with the meter-thick Peterson filters.

Activated carbon has been used at Johnston Atoll Chemical Agent Disposal System (JACADS) to capture agent in plant ventilation air. Here, a stack of six 3-inch beds is used. Typical initial reductions of agent in the first bed have been on the order of 400,000 to 1, showing the pronounced effect of operating at near ambient air temperature (the agents are believed to be somewhat more difficult to remove than the higher molecular weight dioxins). An optimum operating temperature for agent destruction systems between these two extremes (Peterson filter operating temperatures and ambient air temperature) would probably provide the best balance between cost and the extent of contaminant removal.

The Hugo Peterson systems use a moving bed with continuous addition and removal of activated carbon. Because of their simplicity and proven high performance, fixed-bed systems such as those used at JACADS are expected to be a better choice for backing up the high-performance destruction systems planned for the stockpile destruction program.

Leakage around or through the beds of charcoal was initially encountered in the development of the JACADS system. This problem can be detected by measuring contaminant removal efficiency and, once detected, is not difficult to correct.

Hot spots have been encountered in the Hugo Peterson and other high-temperature systems. If not controlled, these hot spots can develop into a fire. Development of hot spots can be monitored by continuous measurement of carbon monoxide concentration and can be controlled by increasing the flue gas velocity or switching to an inert gas or steam. To the committee's knowledge, hot spots are less of a problem at lower temperature and have not been encountered in the JACADS installation.

Fires can also be initiated rapidly if a major upstream process upset should occur, such as the failure of power to the quench, wet scrubbing, and/or cooling water supply pumps. Without corrective action, such a failure would rapidly inject into the carbon beds a high-temperature gas stream with sufficient residual oxygen to cause a fire. The results of such a fire might also involve the rapid release of previously stored contaminants, although some would obviously be destroyed in the fire. An obvious corrective action would be to divert the flue gas flow to a backup bed after cooling the gas with a backup system. Such solutions Will require care in both design and system operation.

Loss of capacity due to contact of the charcoal with water can be caused by several different system failures:

than water. The water would merely block the interstitial passages in the carbon granules, preventing further gas adsorption. It would not likely block the bulk gas flow through the much larger void spaces between the charcoal granules. Again, diverting the flow to a backup bed and water removal system would reduce this risk.

Careful and frequent monitoring of bed performance is clearly needed. This may require special techniques, such as periodic injection of a tracer material chosen for this purpose.

Choice of a specific charcoal type, operating temperature, gas velocity, and monitoring technique will require some further study and testing. However, major problems are not anticipated.

A charcoal system is believed to be superior to the storage and release system described in the report Alternative Technologies for the Destruction of Chemical Agents and Munitions (NRC, 1993a), since the use of charcoal would reduce toxics to a level below that of the current baseline pollution abatement system.

Next: Appendix D: Supercritical Water Oxidation and Wet Air Oxidation »
Recommendations for the Disposal of Chemical Agents and Munitions Get This Book
× 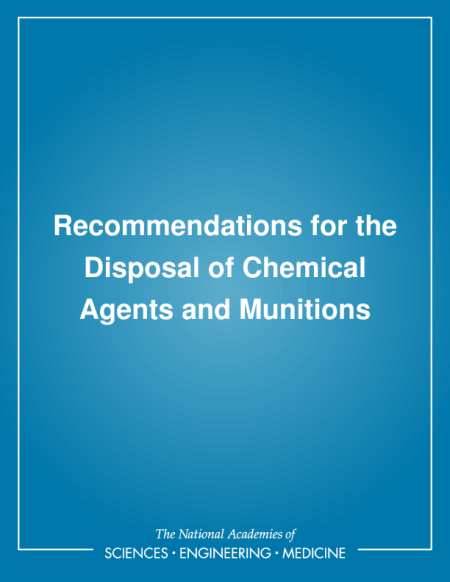