Chapter:6 Discussion and Summary of Day 1

Get This Book
Visit NAP.edu/10766 to get more information about this book, to buy it in print, or to download it as a free PDF.
« Previous: 5 Exposure Mitigation
Page 73 Share Cite
Suggested Citation:"6 Discussion and Summary of Day 1." National Academies of Sciences, Engineering, and Medicine. 2016. Health Risks of Indoor Exposure to Particulate Matter: Workshop Summary. Washington, DC: The National Academies Press. doi: 10.17226/23531.
×

Discussion and Summary of Day 1

To conclude the workshop’s first day, William Nazaroff moderated a discussion among the workshop participants. He opened the discussion by summarizing the key messages he had heard, starting with what he said he thought was a clear picture of the degree to which buildings protect their inhabitants from outdoor PM—which he said was not very good for PM2.5, better for UFPs, and better still for PM10 and larger particles. Buildings are also good, he said, for providing protection against outdoor nitrate but not as good for organic carbon, particularly given the evidence that indoor sources are the predominant contributors to the organic carbon content of indoor PM.

The second key message Nazaroff said he heard concerned the lack of data available to understand the nuances of what is a richly complex system; that lack suggested a potential for using information technology and the “Internet of things” to address the data deficit. Another important message, he said, was the significant variability that exists with regard to how the features of individual buildings and the activities taking place in buildings affect indoor PM levels and their associated health effects. “We are dealing with 100 million dwellings in the United States, tens of millions of commercial spaces, and each one has its own attributes even if the governing principles are common,” Nazaroff said. Similarly, he said, the variability of how people behave in the indoor environment has an important influence, creating a huge challenge to understanding exposure and mitigation but also an opportunity for progress through research.

Bob Thompson of EPA commented on the importance of distilling what is known about indoor PM, mitigation approaches, and possible health

effects into a form that will help the program officers in EPA’s Office of Research to make decisions about where future resources will go, given how tight the research budget is today. “The more we can turn this information into language [that] helps them clearly see its value, the better off we will be from EPA’s perspective,” Thompson said. He also noted the importance of putting terms such as “high cost” and “low cost” into a context of how much value a given expense brings to the people who will be spending money on these mitigations.

Richard Corsi remarked that an understudied area concerns the chemistry occurring in the breathing zone, where organic compounds in a person’s breath can react with ozone. Barbara Turpin commented that consumer products had not been discussed much, and she said she worried that consumers place too much trust in the idea that a device is safe if used as directed. William Hallman from Rutgers University asked if there were any data on particle emissions from gas and electric clothes dryers. Nazaroff responded there has been one paper published on UFPs produced by clothes dryers (Wallace, 2005), and based on the results of that paper his group looked for but could not find evidence that dryers in the homes they studied contributed to the UFP burden in those homes. Nazaroff noted that Lynn Hildemann had said that laundry detergent enzymes are present in dryer lint. Jeffrey Siegel added that there is emerging evidence that dryers can transfer SVOCs deposited on clothing into the air. He also said that a dryer vent produces a high-volume flow rate of air, and in buildings with tight envelopes, that can create potentially serious problems in terms of depressurization and pulling contaminants into the indoor environment from particle-generating appliances.

Terry Brennan commented on the importance of intervening when a building is being designed or completely gutted and rebuilt, noting that he often goes into new buildings with horrible problems that could have been easily avoided during design and construction. He said that one approach to improve conditions in multifamily buildings could be to encourage mortgage companies and banks to require PM-reducing interventions when

owners refinance mortgages, which, he said, occurs every 10 to 15 years. Another opportunity to intervene is when building owners retrofit HVAC systems.

Glenn Morrison wondered if it would be more cost-effective as a nation to spend money, perhaps via tax rebates, to retrofit buildings to remove indoor PM than on making incremental reductions in outdoor PM levels. William Fisk replied there have been a number of cost–benefit analyses for the health benefits that would accrue from improving filtration systems in buildings and the numbers look promising from a societal perspective. What he has not seen, he said, is a comparison of the cost effectiveness of improving health through traditional outdoor PM mitigation approaches versus approaches that can be implemented in buildings. 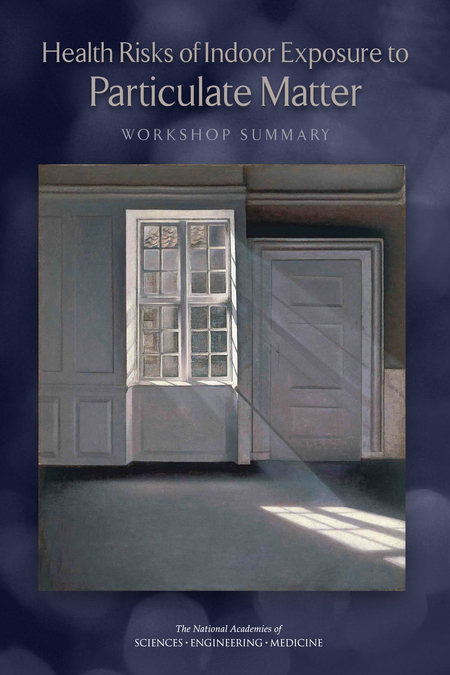 The U.S. Environmental Protection Agency (EPA) defines PM as a mixture of extremely small particles and liquid droplets comprising a number of components, including “acids (such as nitrates and sulfates), organic chemicals, metals, soil or dust particles, and allergens (such as fragments of pollen and mold spores)”. The health effects of outdoor exposure to particulate matter (PM) are the subject of both research attention and regulatory action. Although much less studied to date, indoor exposure to PM is gaining attention as a potential source of adverse health effects. Indoor PM can originate from outdoor particles and also from various indoor sources, including heating, cooking, and smoking. Levels of indoor PM have the potential to exceed outdoor PM levels.

Understanding the major features and subtleties of indoor exposures to particles of outdoor origin can improve our understanding of the exposure–response relationship on which ambient air pollutant standards are based. The EPA’s Indoor Environments Division commissioned the National Academies of Sciences, Engineering, and Medicine to hold a workshop examining the issue of indoor exposure to PM more comprehensively and considering both the health risks and possible intervention strategies. Participants discussed the ailments that are most affected by particulate matter and the attributes of the exposures that are of greatest concern, exposure modifiers, vulnerable populations, exposure assessment, risk management, and gaps in the science. This report summarizes the presentations and discussions from the workshop.