Chapter:3 Studies and Reports Related to the Strategic National Stockpile

Studies and Reports Related to the Strategic National Stockpile

ANTICIPATED RESPONSIBILITIES OF THE SNS IN THE YEAR 2020

The Joint SNS 2020 Working Group comprised members of the NBSB, the OPHPR BSC, and industry representatives.

Responses to Task 1, Parker reported, included the need to secure the public health of the United States and to augment the U.S. security posture. He commented that if “we don’t have a good secure public health policy, we can’t have any other type of security posture.” The next response is to maintain a cache of medical countermeasures (MCMs) and materiel necessary to support a robust response to the widest possible spectrum of public health emergencies. Next, because of the mutual and critical dependence existing between the SNS and state and local public health agencies, the SNS should be increasingly enhanced to meet public health responsibilities. The NBSB and the OPHPR BSC agreed that they did not foresee either a reduction in SNS responsibilities or a reduction in the cost of fulfilling these responsibilities because of continuing needs.

Parker explained that the response to the second task, recommending approaches for meeting responsibilities as efficiently as possible, called for an increased reliance on state-of-the-art risk management and applied science. Metrics proposed for reporting program capability and informing improvement in response to Task 3 include deriving program capability metrics from actual performance data (where such information exists), results of exercises, and computational modeling and simulations. The latter component was emphasized due to the expense of full-blown exercises. The program capability assessment metrics should identify not only gaps and strengths in distribution of MCMs, but also delivery to the public. The report stated that the SNS should carry out rigorous exercises of their current capabilities as part of a wholly integrated national response system (despite the expense, these are still necessary, particularly when dealing with staff on retainers). Finally, Parker noted that the report said performance assessments should be expanded to include the desired outcome: rapid delivery of critical countermeasures to the public. The report’s recommendations are listed in Box 3-1.

A NATIONAL BLUEPRINT FOR BIODEFENSE: LEADERSHIP AND MAJOR REFORM NEEDED TO OPTIMIZE EFFORTS

Ellen Carlin, co-director, Blue Ribbon Study Panel on Biodefense, and principal, Carlin Communications, presented on the report A National Blueprint for Biodefense: Leadership and Major Reform Needed to Optimize Efforts.3 She explained that the self-prescribed mandate was broad, covering the four pillars of biodefense as outlined in Homeland Security

Parker explained that the report also issued 10 recommendations, which he provided with commentary:

Presidential Directive 10, and the panel found that the federal government is carrying out many important activities in a siloed and uncoordinated manner in the absence of a single point of responsible leadership for biodefense or a national strategy that coheres all of the activities of its different departments and agencies.

Carlin described how the report is structured into three thematic areas of deficiency: interagency coordination, collaboration with stakeholders and innovation (particularly in areas of biodetection and biosurveillance), and MCM development. It contains 33 recommendations, of which she focused on the two primarily related to management of the SNS.

Carlin explained that Chapter 2 of the report focused on the need to elevate collaboration with the many SNS stakeholders across the country, with Section IV devoted to advancing planning for MCM distribution and dispensing. Carlin noted that while preparedness for distribution and dispensing has improved greatly over the past 10 years, there are still populations that will not be reached within the 48-hour window within the current system. She said that further challenges that persist within the MCM response architecture include lack of clear centralized leadership; lack of clear and consistent directives for coordination of state, local, territorial, and tribal plans; lack of clear goals and objectives for response; and insufficient funding for health departments.

The panel analyzed various modalities of distribution, such as the postal approach; Carlin contended that an optimal national mass prophylaxis capability would have to reach far beyond what the U.S. Postal Service could provide and into private delivery companies, pharmaceutical chains, and volunteer health care worker coalitions. Similarly, she suggested that dependence on the static open-point of dispensing (POD) model will not meet the need in a mass event. The panel ultimately concluded that national mass prophylaxis must depend on nonfederal input planning and implementation, with a national stakeholder-driven MCM response framework providing structure and guidance for local planning efforts.

Carlin commented that these deliberations led to Recommendation 22 (see Box 3-2), which calls for the development and implementation of an MCM response framework, coordinated by CDC, the ASPR, and the Federal Emergency Management Agency (FEMA) alongside nonfederal partners from states, localities, industries, and nongovernmental organizations.

Carlin highlighted the conclusion that national mass prophylaxis must depend on nonfederal input, planning, and implementation, with the recommended framework addressing parameters for federal commitments such as expectations at the state and local levels, the important issue of clinical utilization guidance (she noted that there are MCMs that were in the stockpile for years before they had clinical guidance published), and essential information sharing with nonfederal partners. Carlin also

BOX 3-2
Recommendation 22 from
A National Blueprint for Biodefense: Leadership and Major Reform Needed to Optimize Efforts

Develop and implement a Medical Countermeasure Response Framework. A stakeholder-driven framework for solving continued challenges in operational MCM response will provide greater assurance that distribution and dispensing can be achieved quickly, efficiently, and safely.

emphasized the importance of Recommendation 23 (see Box 3-3), which calls for select forward deployment of SNS assets to localities that have a demonstrated ability to handle them appropriately.

4 A summary of the report’s findings are available at http://www.astho.org/Preparedness/DPHP-Materials-2013/PHEMCE (accessed June 3, 2016).

BOX 3-3
Recommendation 23 from
A National Blueprint for Biodefense: Leadership and Major Reform Needed to Optimize Efforts

Allow for forward deployment of Strategic National Stockpile assets. Pre-deployment of SNS caches to those jurisdictions that have demonstrated the capability to appropriately handle SNS contents will vastly improve preparedness.

Public Health Emergency Medical Countermeasures Enterprise (PHEMCE) and specifically to engage in priority activities identified in the 2012 HHS PHEMCE Implementation Plan. The second centered on actions to further the implementation of Executive Order 13527, “Establishing Federal Capability for the Timely Provision of Medical Countermeasures Following a Biological Attack.” The third focus was on actions to enhance the effectiveness of MCM and Public Health Preparedness Program activities within ASTHO.

Employing the methodology, according to Burhans, generated sig-

nificant evidence that the PHEMCE Strategy and Implementation Plan, particularly the federal inter- and intraagency organizational structure, had been successful in increasing collaboration and alignment among the federal agencies engaged in PHEMCE. Examples he cited included the Medical Countermeasures Initiative (MCMi), FDA’s initiative to organize around MCM development, approval, and use. This initiative demonstrates multilayered collaboration with internal FDA partners, external PHEMCE partners, and drug manufacturers to advance FDA’s PHEMCE activities. CDC and ASPR/Biomedical Advanced Research and Development Authority (BARDA) aligned their efforts to accomplish a stockpile of new botulinum and anthrax antitoxins identified by the implementation plan as top priorities.

Burhans emphasized that the public health enterprise (see Box 3-4), which has the responsibility for dispensing MCMs, needs to be engaged in the requirement-setting process because decisions on the formulary and the attributes of the MCMs absolutely dictate dispensing strategies. If the public health enterprise is not fully engaged in the requirement-setting process, then there is the potential for decisions to be made that may not fully reflect the concerns of those doing the dispensing.

The next set of recommendations from the ASTHO report relates to strategic issues identified in Executive Order 13527, which Burhans described as high-level objectives. The first recommendation is to work to communicate the U.S. Postal Service dispensing model to the public health enterprise and find ways to support law enforcement participation in the execution of that model, because having sufficient law enforcement capacity was determined to be a limiting factor in the actual use of that plan by many local and state health departments. The second, understanding and

communicating the federal rapid response plan to the public health enterprise, he described as essentially developing a concept of operations about how federal resources would be brought to bear to enhance local dispensing efforts. This also includes a federal continuity-of-operations plan, whereby essential personnel in federal agencies would be identified and provided with MCMs. The third is to identify and advance lessons learned from the first round of “big city” reviews, and the fourth is to engage FEMA in the routine assessment of state SNS planning.

Burhans outlined a final set of recommendations that were provided for ASTHO regarding how they could better organize their internal structures to be more effective:

In helping wrap up the discussions, Burel reflected that during his 8-year tenure as director of the CDC Division of Strategic National Stockpile, the division has been the recipient of more than 120 reviews and audits that have benefited the program in numerous ways. It has developed increasingly stronger partnerships with other federal and nonfederal agencies that have been parlayed into better ability to respond to events such as Ebola. Burel has been invited to be part of the DoD Medical Logistics Senior Steering Council, for example, which he referred to as a forum for sharing topics of discussion that the SNS has with PHEMCE, as well as how the agencies can mutually support each other in health emergencies. 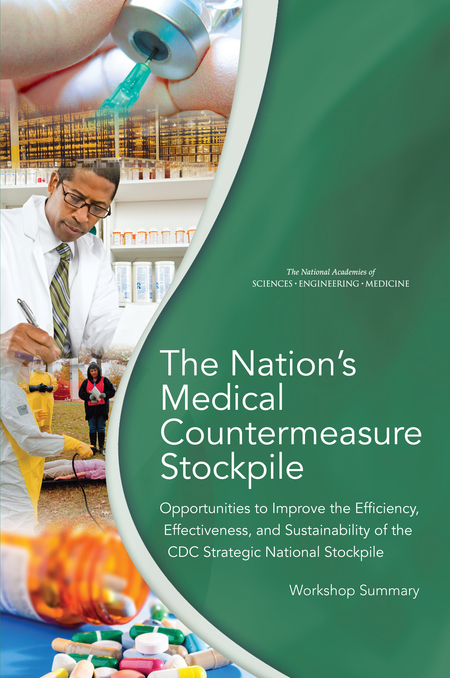 Large catastrophic events, or rare acute events, may cause situations in which a local jurisdiction’s medicines and medical supplies are not sufficient to provide care to the population it serves. In these cases of natural or engineered disasters, such as a terrorist attack, influenza pandemic, or earthquake, state or local authorities can request that the federal government provide assets from the Strategic National Stockpile to augment the state and local jurisdictions’ resources.

The Centers for Disease Control and Prevention’s (CDC’s) Strategic National Stockpile (SNS) is the nation’s repository of antibiotics, chemical antidotes, antitoxins, vaccines, antiviral drugs, and other medical materiel designed to supplement and resupply state and local public health agencies in the event of an emergency. The materiel is intended to support national health security and is managed by the Office of Public Health Preparedness and Response’s (OPHPR’s) Division of Strategic National Stockpile (DSNS). The stated mission of the SNS is to prepare and support partners and provide the right resources at the right time to secure the nation’s health.

The National Academies of Sciences, Engineering, and Medicine organized a two-day public workshop to explore opportunities to improve the efficiency, effectiveness, and sustainable methods used by the CDC’s SNS to distribute medical countermeasures and other supplies during disasters and other public health emergencies, especially those which result in disruption of physical infrastructure such as the electrical grid, central roadways, bridges, and tunnels within the impacted community. Participants explored relevant distribution lessons learned from other federal agency stockpiles and the private sector as well as opportunities to develop public-private collaborations in the purchase, warehousing, management, and distribution of medical countermeasures. This report summarizes the presentations and discussions from the workshop.