Get This Book
Visit NAP.edu/10766 to get more information about this book, to buy it in print, or to download it as a free PDF.
« Previous: Appendix B: Scientific Discoveries of the Lunar Reconnaissance Orbiter and Opportunity Rover During Extended Phase
Page 68 Share Cite
Suggested Citation:"Appendix C: NASA Science Mission Directorate Budgets by Division for Fiscal Year 2016." National Academies of Sciences, Engineering, and Medicine. 2016. Extending Science: NASA's Space Science Mission Extensions and the Senior Review Process. Washington, DC: The National Academies Press. doi: 10.17226/23624.
×

Data for Figures C.1 through C.4 were provided by NASA to the committee. They demonstrate the individual budgetary breakdowns for each division. They are primarily included here to enable comparison of the size of development budgets versus extended science operations budgets in each division. Because the divisions manage and calculate their budgets in slightly different ways, it is not possible to make detailed budget category comparisons between the divisions. 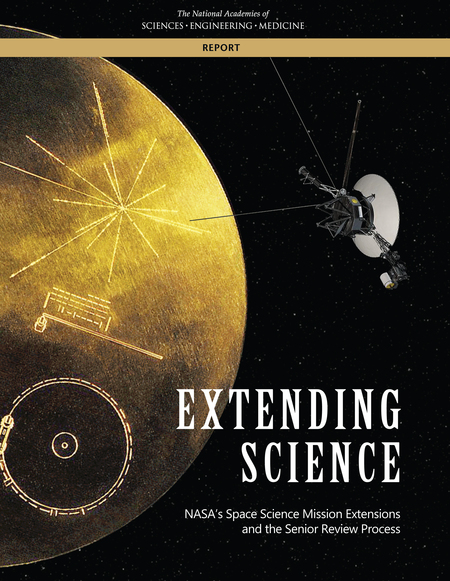 NASA operates a large number of space science missions, approximately three-quarters of which are currently in their extended operations phase. They represent not only a majority of operational space science missions, but a substantial national investment and vital national assets. They are tremendously scientifically productive, making many of the major discoveries that are reported in the media and that rewrite textbooks.

Extending Science – NASA’s Space Science Mission Extensions and the Senior Review Process evaluates the scientific benefits of missions extensions, the current process for extending missions, the current biennial requirement for senior reviews of mission extensions, the balance between starting new missions and extending operating missions, and potential innovative cost-reduction proposals for extended missions, and makes recommendations based on this review.