Get This Book
Visit NAP.edu/10766 to get more information about this book, to buy it in print, or to download it as a free PDF.
« Previous: Appendix G: Barriers to Participation and Redemption
Page 547 Share Cite
Suggested Citation:"Appendix H: Kosher and Halal Substitution Options." National Academies of Sciences, Engineering, and Medicine. 2017. Review of WIC Food Packages: Improving Balance and Choice: Final Report. Washington, DC: The National Academies Press. doi: 10.17226/23655.
×

NOTES: Results were obtained from a database of WIC food lists for all 90 state agencies as of October 2009, as well as foods that were approved in the period immediately preceding implementation of the Interim Rule. WIC state plans, vendor manuals, and grocery shopping guides were also reviewed. The most recent WIC Food Packages Policy Options Study (USDA/FNS, 2015) did not quantify the number of state agencies allowing Kosher and Halal options nationally. The report indicated that 7 percent of state agencies covering 21.3 percent of WIC participants allowed Kosher milk.

* Percentages represent the number of WIC participants linked to the state agencies offering the option.

TABLE H-2 WIC ITFPS-2: Percentage of Mothers Who Have Religious or Lifestyle Beliefs That Influence Feeding, by Belief

* N is the number of mothers who completed interviews at month 13.

Next: Appendix I: Complementary Feeding: Summary of Information Reviewed »
Review of WIC Food Packages: Improving Balance and Choice: Final Report Get This Book
× 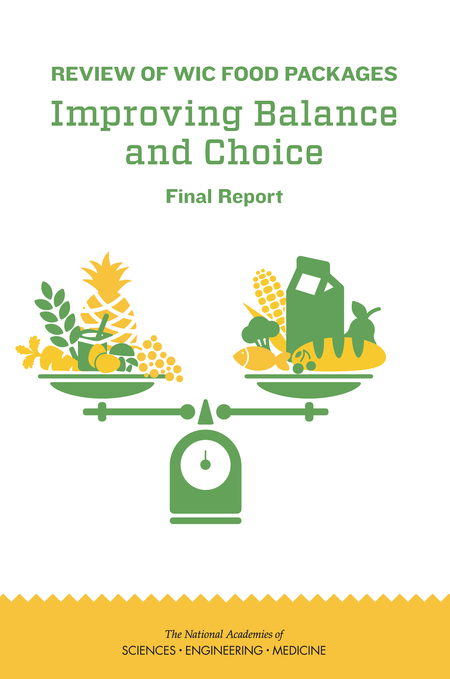 The Special Supplemental Nutrition Program for Women, Infants, and Children (WIC) began 40 years ago as a pilot program and has since grown to serve over 8 million pregnant women, and mothers of and their infants and young children. Today the program serves more than a quarter of the pregnant women and half of the infants in the United States, at an annual cost of about $6.2 billion. Through its contribution to the nutritional needs of pregnant, breastfeeding, and post-partum women; infants; and children under 5 years of age; this federally supported nutrition assistance program is integral to meeting national nutrition policy goals for a significant portion of the U.S. population.

To assure the continued success of the WIC, Congress mandated that the Food and Nutrition Service of the U.S. Department of Agriculture (USDA) reevaluate the program's food packages every 10 years. In 2014, the USDA asked the Institute of Medicine to undertake this reevaluation to ensure continued alignment with the goals of the Dietary Guidelines for Americans. In this third report, the committee provides its final analyses, recommendations, and the supporting rationale.