While bringing multimodal therapies forward to the market presents substantial challenges for industry, some companies have already successfully taken on this challenge, and others are creating new models for bringing partners together into symbiotic relationships, said Christopher

Shaffer, associate research fellow at Pfizer Inc. Shaffer participated in a panel of industry representatives that discussed the challenges related to developing multimodal therapies and provided examples of how corporate partners are working together to advance such therapies to the marketplace.

According to Jeffrey Nye, barriers exist with regard to adoption, use, and reimbursement of innovative therapies, even when they provide increased therapeutic value. For example, an estimated 35 percent of patients with depression are resistant to treatment, many of them refractory to two or more medicines. TMS has thus been proposed as an alternative. This was discussed at great length at another Forum on Neuroscience and Nervous Systems Disorders workshop in March 2015 (NASEM, 2015). In a recent meta-analysis of 32 trials evaluating the efficacy of selective serotonin reuptake inhibitors (SSRIs), the effect size for all SSRIs ranged from 0.02 to 0.53, with a median of 0.24 (Hieronymus et al., 2016). In contrast, said Nye, in studies of patients with depression who have failed at least one and up to four antidepressants, the effect size of TMS ranged from 0.29 to 0.76, with a mean of 0.53. Despite the superiority of TMS in treating depression, the market uptake has been much slower than for antidepressants.

The reasons for limited market uptake include psychiatric practice patterns, patient burden, high cost and low levels of reimbursement by payers, and limited evidence of the comparative effectiveness of TMS to pharmacotherapy, said Nye. Psychiatrists resist the implementation of TMS in their practices in part because to do so would require additional expensive equipment, space, and personnel. Moreover, they are not convinced of its benefits and have concerns about potential risks. For patients, the fact that a full course of TMS therapy requires more than 20 sessions of treatment imposes substantial time constraints, and the slowness of response to therapy sometimes leads to discontinuation. Although insurance coverage has improved in recent years, co-pays can make TMS unaffordable for many patients. As noted by Rhonda Robinson-Beale in Chapter 4, payers may favor pharmacotherapy because the cost is much lower than TMS. Furthermore, Nye explained that despite the seeming superiority of TMS over pharmacotherapy in

terms of effect size, as noted above, there have been few or no head-to-head studies comparing the different devices available; TMS versus adjunctive pharmacotherapy; or multimodality therapies combining TMS with pharmacotherapy or psychotherapy versus standard of care. Studies about the durability of such treatments are also limited. Such evidence is needed, said Nye, not only for the FDA, but also for payers, professional societies, physicians, and patients.

Education of physicians—not just psychiatrists but neurologists and pain specialists as well—will also be needed to alter practice patterns, said Nye. Alternative providers such as TMS treatment centers, as well as less expensive, mobile devices that require less medical supervision, could also dramatically influence usage and uptake. Sarah Lisanby added that another factor affecting uptake of TMS is increased competition from device manufacturers, and she cited the need for new business models that make financial sense for clinical programs.

Medtronic introduced a combination product to treat chronic pain more than 20 years ago, according to Keith Hildebrand. The approach fits into the category of cross-labeled products, as discussed by Patricia Love earlier. Medtronic sells the drug-delivery device, and two FDA-approved monotherapies have been cross-labeled to be used with the pump: Infumorph, a branded form of morphine, and Prialt, a branded form of ziconotide. The device allows high concentrations of drugs to be delivered directly to the CNS, and a physician can regulate delivery of drugs according to flexible dosing patterns as needed by the patient. The pump is refillable via a syringe and hypodermic needle, and can remain implanted for up to 7 years.

Hildebrand said that since the device was introduced, the company has made design changes to address cost and several complications, including unpredictable episodes of pain, local toxicity at the catheter tip, drug interactions when multiple drugs are delivered by the pump, drug incompatibility with the pump components, tolerance to the drugs, and invasiveness. Modification of this therapy to patient needs included development of a patient-controlled device that allows patients to deliver an extra bolus of morphine when experiencing breakthrough pain. This feature gives patients control and increases their engagement in their

care, both of which can benefit patients, said Hildebrand. He noted that both physician education and understanding the mechanisms underlying complications such as catheter-tip granulomas are needed to ensure the devices are used properly (Yaksh et al., 2002). For example, rather than increasing the morphine dose in response to increased pain and neurologic symptoms, using the minimum dose at the lowest concentration possible may mitigate this problem.

Hildebrand said the key to expanding the use of such a delivery system is to understand the underlying drug mechanisms. For example, Medtronic investigated the potential for using a combination of clonidine and morphine for the treatment of intractable pain (Hildebrand et al., 2003), and stumbled on a side effect with potential therapeutic benefit: lower blood pressure due to activation of alpha2 adrenoceptors on presynaptic sympathetic fibers in the lateral horn of the spinal cord. They are now investigating whether this side effect could be turned into a therapeutic effect for hypertensive patients (Komanski et al., 2015).

A MULTINATIONAL COLLABORATION TO DEVELOP A MULTIMODAL THERAPY

A different model of collaboration among industry partners—one that brought together a big pharmaceutical company and a small company developing a novel protein-device combination therapy—was presented by Erich Mohr, chairman and chief executive officer of MedGenesis Therapeutix, Inc., and Christopher Shaffer from Pfizer Inc. The complex story started in 1994, Mohr said, when Amgen acquired the patent for glial cell line–derived neurotrophic factor (GDNF) as part of its purchase of the biotechnology company Synergen. GDNF is a naturally occurring protein found in the brain that enhances the survival of mid-brain dopaminergic neurons, and thus was hypothesized to be effective for the treatment of PD (Lin et al., 1993). Furthermore, the dorsal putamen is the brain region with the greatest dopamine depletion in PD. Following promising preclinical studies (Gash et al., 1998), a Phase I study in 2005 showed marked improvement in five patients who received continual GDNF intraputamenal infusion for 2 years (Patel et al., 2005). However, Phase II double-blind, placebo-controlled studies by Amgen failed to show efficacy and demonstrated adverse events.

that the failure to optimally deliver adequate GDNF quantities to the intended target resulted in the negative Phase II trial. They proposed using a technique called intermittent convection-enhanced delivery (CED) to bypass the blood−brain barrier and deliver GDNF directly to the putamen (Gimenez et al., 2011). In December 2009, MedGenesis licensed GDNF from Amgen, and subsequently launched two Phase II studies of the treatment in 2012 and entered into an agreement with Pfizer Inc. granting it an exclusive option to license GDNF in 2014. Both the necessary preclinical and clinical efforts were variously supported by MJFF, Parkinson’s UK, The Cure Parkinson’s Trust, as well as the Deutsche Parkinson Vereinigung in Germany. The trials were conducted at the North Bristol National Health Service (NHS) Trust, which also functioned as the sponsor of this investigator-initiated program. For patients enrolled in the trials, the CED device was stereotactically implanted using robot-assisted surgery, with a skull-mounted multiaccess port hidden behind the ear. Once per month, patients undergo an infusion lasting approximately 90 minutes administered via a programmable pump.

Shaffer said these trials represent multinational partnerships. Four players from three countries are involved: MedGenesis (Victoria, British Columbia, Canada), the drug manufacturer and the commercial owner of the clinical data North Bristol NHS Trust (Bristol, United Kingdom), the regulatory sponsor and academic owner of the clinical data; Renishaw plc (Bristol, United Kingdom), manufacturer of the device on behalf of the North Bristol Trust; and Pfizer Inc., which has collaborative research agreements with both MedGenesis and Renishaw. The program is overseen by a joint steering committee, equally weighted with MedGenesis and Pfizer colleagues. Pfizer’s global infrastructure enabled the group to establish advisory boards in Europe, Japan, and North America. Although this is indeed a complex partnership, additional complexity might be introduced if partners end up being competitors, suggested Karl Kieburtz.

The results from the double-blind, placebo-controlled study, announced just 3 weeks after the workshop, showed no statistically significant effect on the primary outcome measure.1 Mohr said that additional analyses are ongoing and may yet lead to more promising conclusions. Even before the outcome of the trial was known, he added, the study had demonstrated success in delivering a compound to where it

belongs, and may open the door to other compounds and trials for other illnesses for which localized delivery is essential, such as glioblastoma and Huntington’s disease. Walter Koroshetz, director of the National Institute of Neurological Disorders and Stroke (NINDS), added another twist to the potential for CED: viral delivery of compounds or biologics, including gene therapy.

Several workshop participants note that the GDNF−CED example demonstrates a number of common issues related to the development of multimodal therapies that present challenges to companies working in isolation, or even to small companies with limited resources. In particular, understanding the underlying biology of the combination and effective collaborations between device and drug companies and clinicians are integral to successful development and implementation of multimodal therapies. In addition, Stevin Zorn noted that compounds such as GDNF could have remained buried had it not been for the determination of individuals who believed in the product.

Brian Fiske suggested that, with respect to GDNF and possibly other treatments, there may also be a need for combinations of drugs to be given together, for example, to make growth factor uptake more robust. Hendrix suggested that one path forward for a company with an asset that might be useful in combination with something else could be to find a biotech company or other partner to bring the combination forward. 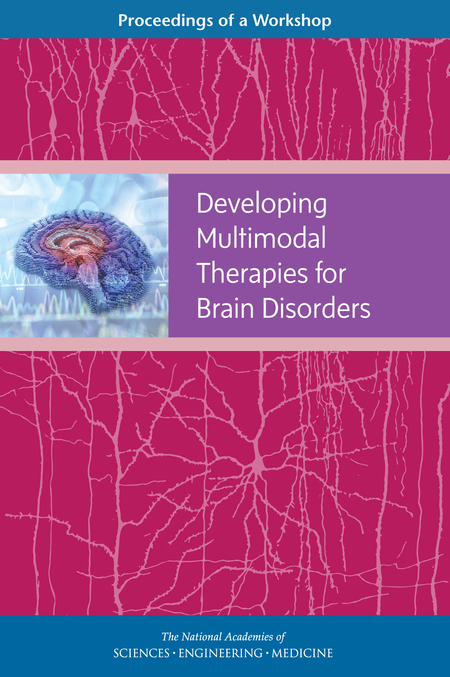