Get This Book
Visit NAP.edu/10766 to get more information about this book, to buy it in print, or to download it as a free PDF.
« Previous: 7 Alternative Approaches to Criminal Justice Measurement
Page 67 Share Cite
Suggested Citation:"8 Key Themes and Possible Next Steps." National Academies of Sciences, Engineering, and Medicine. 2017. Improving Collection of Indicators of Criminal Justice System Involvement in Population Health Data Programs: Proceedings of a Workshop. Washington, DC: The National Academies Press. doi: 10.17226/24633.
×

Key Themes and Possible Next Steps

John Laub (University of Maryland), Wendy Manning (Bowling Green State University), and Emily Wang (Yale University) led a discussion about key themes presented over the course of the workshop. Wang spoke on how the workshop presentations highlighted some key tensions that arise when considering health equity for incarcerated populations in comparison with non-incarcerated populations. Although there is quite a bit of information about the individual effects of incarceration on health, information on how it affects families, communities, and the population is lacking.

Another outstanding issue, Wang said, is the need for a greater understanding of causality, mechanisms, risk factors, and how criminal justice ultimately affects the life course of an individual. Wang said that as a researcher she understands the desire to pursue the topic with a very narrow and focused approach; however, there is no single set of questions that will address every possible risk factor, and, as such, a single, broad question might be a better place to start. She also pointed out a few of the limitations one may face considering the addition of a criminal justice involvement question to population health surveys: in addition to the scarcity of survey space, the sample sizes of the major health surveys in question do not yield high percentages of people with criminal justice histories.

Wang said she believes there seem to be short-, medium- and long-term goals. The short-term idea would be to add a single question, harmonized across the health surveys, that would provide some understanding of the concept of criminal justice being an enduring trait: she said she thinks a question about conviction would best serve this purpose. For medium- and long-term goals, researchers should consider adjusting the sampling frame

to better capture applicable respondents, incorporating additional questions to gain more insight, and seriously consider linking the survey responses with administrative data. Wang also feels that the discourse needs to be broadened beyond the workshop attendees, in an attempt to engage more policy makers, more public health professionals, and more of the general public.

Laub noted several issues that were not discussed much if at all during the workshop, including privatization of prisons, which could affect the quality of care provided, and childhood disadvantage, which manifests itself in adult health. He proposed that the best approach is to maintain a human-centered focus and a sense of urgency to better understand the needs of the relevant population. From a research quality perspective, Laub said careful consideration should be given to the question of whether self-reporting is going to provide the data accuracy desired. He reiterated statements by Ingrid Binswanger (Kaiser Permanente Colorado and University of Colorado School of Medicine) from earlier in the workshop that prison should not be used as a last resort treatment option for individuals best treated in other settings. Lastly, Laub encouraged the workshop participants to try to reimagine the criminal justice system such that it could, in fact, be a positive turning point in the life course of individuals as opposed to a negative turning point.

Manning agreed that the best starting point might be developing one targeted sociodemographic question that could be asked on population health surveys. She said that there is greater utility in using more than one survey vehicle to obtain these data. She opined that criminal justice involvement should be asked about in the same manner as other sociodemographic characteristics, such as race and educational attainment—topics that provide insight into traits that could potentially shape a respondent’s experiences. Manning acknowledged that the responses may differ across surveys and geographic region, however, because of varied demographic distribution.

Manning agreed with the need to learn more about causal inferences and said that in order to do so, more individual analyses are needed and researchers need to be mindful of comparison/control groups. Instead of simply looking at incarcerated and non-incarcerated individuals, it may behoove researchers to find individuals who have never been incarcerated but have reported doing activities very similar to ones for which others were arrested and convicted. Manning also made the suggestion that the participants consider the strong linkages between incarceration and drug use for future analyses.

Michael Massoglia (University of Wisconsin) advised the participants not to automatically think of causality and prevalence as mutually exclusive phenomena. He said there could be opportunities to leverage data in a

way that would address causality and also shed light on prevalence issues. Massoglia also expressed concern with Wang’s suggestion to use conviction as a starting point for a single, widely applied question, since many people who are convicted of a crime never go to prison. He questioned whether getting to the heart of the matter in a single question would require more specificity. Wang responded, saying that the “denominator” question considered for this purpose, whatever it would be, should have a high percentage point and enduring utility as an indicator of risk.

Christopher Wildeman (Cornell University) and Ruth Peterson (Ohio State University, emerita) continued the discussion about the most effective focal point for criminal justice involvement data collection. Wildeman stated that he feels incarceration is most important to pinpoint, but that if conviction is the point of contact to be measured, the focus should be on felony and not misdemeanor conviction. Felony convictions can more significantly alter the course of a person’s life because people are required to disclose felony convictions on applications for employment and other services. Peterson agreed that felony conviction is a more important data point than misdemeanor conviction, but asserted that incarceration should receive highest priority if the criminal justice involvement question set is limited to one or two items. Ross Matsueda (University of Washington) assented to the idea of asking about incarceration, with questions about felony conviction being a close second priority if space allowed. Amanda Geller (New York University) suggested using the term “custody” instead of “incarceration,” since there are people in jail who have not yet been convicted of a crime.

Anjani Chandra (National Survey of Family Growth) asked the participants if they believed that the time frame of recall was of any importance when formulating a question. Wildeman suggested the question should ask about involvement at any point—a “have you ever” question—rather than a fixed time frame. John Boyle (ICFI International) reminded the group that the item does not have to be a “yes/no” question; it is possible to list the various points of contact as options in one question, and allow for multiple responses.

Michael Schober (The New School) said that he was intrigued by Manning’s proposal to incorporate a criminal justice involvement question in a list of demographic questions. He mentioned that, historically, the initial cluster of demographic questions becomes normalized over time. Adding criminal justice involvement to that familiar repertoire could potentially remove some of the stigma associated with the topic. He added that obtaining a better understanding of the relative sizes and sampling frames of the surveys in question could drive the decision making for what type of single question would be best asked. He said this would be particularly helpful when thinking about future policy discussion. Schober also reminded the

workshop participants that, to the extent that people want to make any proposal for an existing survey or to any organization that has an ongoing survey that has its own mandate, its own cycle, and the like, researchers need to be very clear in their argument for how adding new data collection items is in the interest of that specific survey.

Binswanger said that information about the facility from which the person receives care should also be taken into account. People who have had criminal justice contact but are still living in the community have access to a different set of services than people in prisons or jails. Binswanger said that in addition to distinguishing the type of care provided, knowledge of the entity responsible for providing the care would facilitate quality assessments.

Rashida Dorsey (U.S. Department of Health and Human Services) thanked the workshop participants for all their input. She then asked the participants to continue contemplating which criminal justice contact points were important to measure in relation to health: to consider them in terms of priority, and to think about what each would help us better understand as well as what it would not be able to tell us. Dorsey encouraged participants to share their later thoughts with the Office of the Assistant Secretary for Planning and Evaluation and the Office of Minority Health in an effort to continue the discourse on this issue.

Next: References »
Improving Collection of Indicators of Criminal Justice System Involvement in Population Health Data Programs: Proceedings of a Workshop Get This Book
× 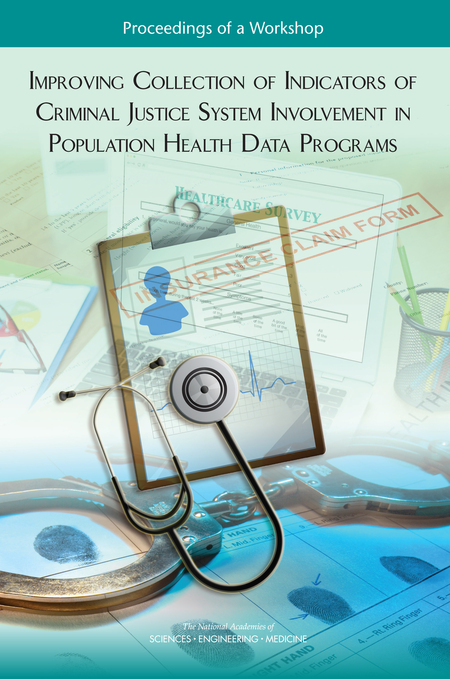