Volcanic Eruptions and Their Repose, Unrest, Precursors, and Timing (2017)

Get This Book
Visit NAP.edu/10766 to get more information about this book, to buy it in print, or to download it as a free PDF.
« Previous: Overview
Page 3 Share Cite
Suggested Citation:"Summary." National Academies of Sciences, Engineering, and Medicine. 2017. Volcanic Eruptions and Their Repose, Unrest, Precursors, and Timing. Washington, DC: The National Academies Press. doi: 10.17226/24650.
×

Volcanoes are a key part of the Earth system, and open a window into the inner workings of the planet. More than a dozen volcanoes are usually erupting on Earth at any given time. Some of these eruptions are devastating, killing people, damaging homes and infrastructure, altering landscapes, and even disrupting climate. Fortunately, many eruptions are preceded by signs of unrest (precursors) that can be used to anticipate eruptions and support disaster planning.

Accurate forecasts of the likelihood and magnitude of an eruption in a specified timeframe are rooted in a scientific understanding of the processes that govern the storage, ascent, and eruption of magma. Yet our understanding of volcanic systems is incomplete and biased by the limited number of volcanoes and eruption styles observed with advanced instrumentation. Eruption behaviors are diverse (e.g., violently explosive or gently effusive, intermittent or sustained, last hours or decades) and may change over time at a volcano. More accurate and societally useful forecasts of eruptions and their hazards are possible by using new observations and models of volcanic processes.

At the request of managers at the National Aeronautics and Space Administration, the National Science Foundation (NSF), and the U.S. Geological Survey (USGS), the National Academies of Sciences, Engineering, and Medicine established a committee to undertake the following tasks:

These four tasks are closely related. Improved understanding of volcanic processes guides monitoring efforts and improves forecasts. In turn, improved monitoring provides the insights and constraints to better understand volcanic processes. This report identifies key science questions, research and observation priorities, and approaches for building a volcano science community capable of tackling them. The discussion below first summarizes common themes among these science questions and priorities, and then describes ambitious goals (grand challenges) for making major advances in volcano science.

Many fundamental aspects of volcanoes are understood conceptually and often quantitatively. Plate tectonics and mantle convection explain where volcanoes occur. We understand how magma is initially created in Earth’s mantle, how it rises toward the surface, that it can be stored and evolve in magma chambers within the crust, and that a number of processes initiate eruptions. We understand in general terms why some magmas erupt explosively and others do not, and why some volcanoes erupt more often than others. High-resolution observations and models combined provide a detailed and quantitative picture of eruptions once they begin.

Our understanding is incomplete, however, especially those aspects of volcano behavior that define the timing, duration, style, size, and consequences of eruptions. Additional questions relate to our ability to forecast eruptions. What processes produce commonly observed geophysical and geochemical precursors? What factors determine if and when unrest will be followed by eruption? How rapidly do magmas mobilize prior to eruption? Which volcanoes are most likely to erupt in coming years and decades? And we are only beginning to decipher the impacts of large volcanic eruptions on Earth’s climate and biosphere.

Our understanding of the entire life cycle and diversity of volcanoes—from their conception in the mantle to their periods of repose, unrest, and eruption to their eventual demise—is poised for major advances over the next decades. Exciting advances in our ability to observe volcanoes—including satellite measurements of ground deformation and gas emissions, drone observations, advanced seismic monitoring, and real-time, high-speed acquisition of data during eruptions—await broad application to volcanic systems. Parallel advances in analytical capabilities to decipher the history of magmas, and in conceptual, experimental, and numerical models of magmatic and volcanic phenomena, both below and above ground, will provide new insights on the processes that govern the generation and eruption of magma and greatly improve the quality of short-term, months to minutes, forecasts. The time is ripe to test these models with observations from new instrumentation, data collected on fine temporal and spatial scales, and multidisciplinary synthesis.

Four common themes emerged from the research priorities detailed in the following chapters:

Advances will come from measurements of physical and chemical properties of magmas and erupted materials, deciphering the history of magmas (before and during eruption) recorded in their crystals and bubbles, and developing new models that account for the numerous interacting processes and vast range of scales, from microscopic ash particles and crystals, to eruption columns that extend to the stratosphere.

Few volcanoes have a long record of monitoring data. New and expanded networks of ground, submarine, airborne, and satellite sensors that characterize deformation, gases, and fluids are needed to document volcanic processes during decade-long periods of repose and unrest. High-rate, near-real-time measurements are needed to capture eruptions as they occur, and efficient dissemination of information is needed to formulate a response. Both rapid response and sustained monitoring are required to document the life cycle of volcanoes. Monitoring and understanding volcanic processes go hand-in-hand: Different types of volcanoes have different life cycles and behaviors, and hence merit different monitoring strategies.

Physics-based models promise to improve forecasts by assimilating monitoring data and observations. Progress in forecasting also requires theoretical and experimental advances in understanding eruption processes, characterization of the thermal and mechanical properties of magmas and their host rocks, and model validation and verification. Critical to eruption forecast-

ing is reproducing with models and documenting with measurements the emergent precursory phenomena in the run-up to eruption.

Long-term forecasts rely on understanding the geologic record of eruptions preserved in volcanic deposits on land, in marine and lake sediments, and in ice cores. Secondary hazards that are not part of the eruption itself, such as mud flows and floods, need to be better studied, as they can have more devastating consequences than the eruption. Understanding the effects of eruptions on other Earth systems, including climate, the oceans, and landscapes, will take coordinated efforts across disciplines. Progress in long-term forecasts, years to decades, requires open-access databases that document the full life cycle of volcanoes.

The key science questions, research and observation priorities, and new approaches highlighted in this report can be summarized by three overarching grand challenges. These challenges are grand because they are large in scope and would substantially advance the field, and they are challenges because great effort will be needed. Figure S.1 illustrates these challenges using the example of the 2016 eruption of Pavlof volcano, Alaska. The volcanic hazards and eruption history of Pavlof are summarized by Waythomas et al. (2006).

1. Forecast the onset, size, duration, and hazard of eruptions by integrating observations with quantitative models of magma dynamics.

A principal goal of volcano science is to reduce the adverse impacts of volcanism on humanity, which requires accurate forecasts. Most current eruption forecasts use pattern recognition in monitoring and geologic data. Such approaches have led to notable forecasts in some cases, but their use is limited because volcanoes evolve over time, there is a great diversity of volcano behavior, and we have no experience with many of the potentially most dangerous volcanoes. A major challenge is to develop forecasting models based instead on physical and chemical processes, informed by monitoring. This approach is used in weather forecasting. Addressing this challenge requires an understanding of the basic processes of magma storage and ascent as well as thresholds of eruption initiation. This understanding and new discoveries will emerge from new observations, experimental measurements, and modeling approaches. Models are important because they capture our conceptual and quantitative understanding. Experiments test our understanding. Relating models to observations requires multiple types of complementary data collected over an extended period of time.

2. Quantify the life cycles of volcanoes globally andovercome our currentbiasedunderstanding.

Determining the life cycle of volcanoes is key for interpreting precursors and unrest, revealing the processes that govern the initiation and duration of eruptions, and understanding how volcanoes evolve between eruptions. Our understanding is biased by an emphasis over the last few decades of observation with modern instruments, and most of these well-studied eruptions have been small events that may not scale to the largest and most devastating eruptions. Strategic deployment of instruments on volcanoes with different characteristics would help build the requisite knowledge and confidence to make useful forecasts. For every volcano in the United States, a realistic goal is to have at least one seismometer to record the small earthquakes that accompany magma movement. Even in the United States, less than half of potentially active volcanoes have a seismometer, and less than 2 percent have continuous gas measurements. Global and daily satellite images of deformation, and the ability to measure passive CO2 degassing from space would fill critical observational gaps. Geologic and geophysical studies are required to extend understanding of the life cycle of volcanoes to longer periods of time. On shorter time scales, satellite measurements, emerging technologies such as drones, and expansion of ground-based monitoring networks promise to document processes that remain poorly understood.

The volcano science community needs to be prepared to capitalize on the data and insights gained from eruptions as they happen. This will come from effective integration of the complementary research and monitoring roles by universities, the USGS, and other government agencies. Volcano science is fundamentally interdisciplinary and the necessary expertise is spread across these institutions. The science is also international, because every volcano provides insights on processes that drive eruptions. Volcanic eruptions can have global impacts and so demand international collaboration and cooperation. New vehicles are needed to support interdisciplinary research and training, including community collaboration and education at all levels. Examples of similar successful programs in other fields include NSF’s Cooperative Studies of the Earth’s Deep Interior program for interdisciplinary research and National Earthquake Hazards Reduction

Results of the above investments in science will be most evident to the public in improved planning and warning and, ideally, a deeper appreciation of this amazing natural phenomenon. 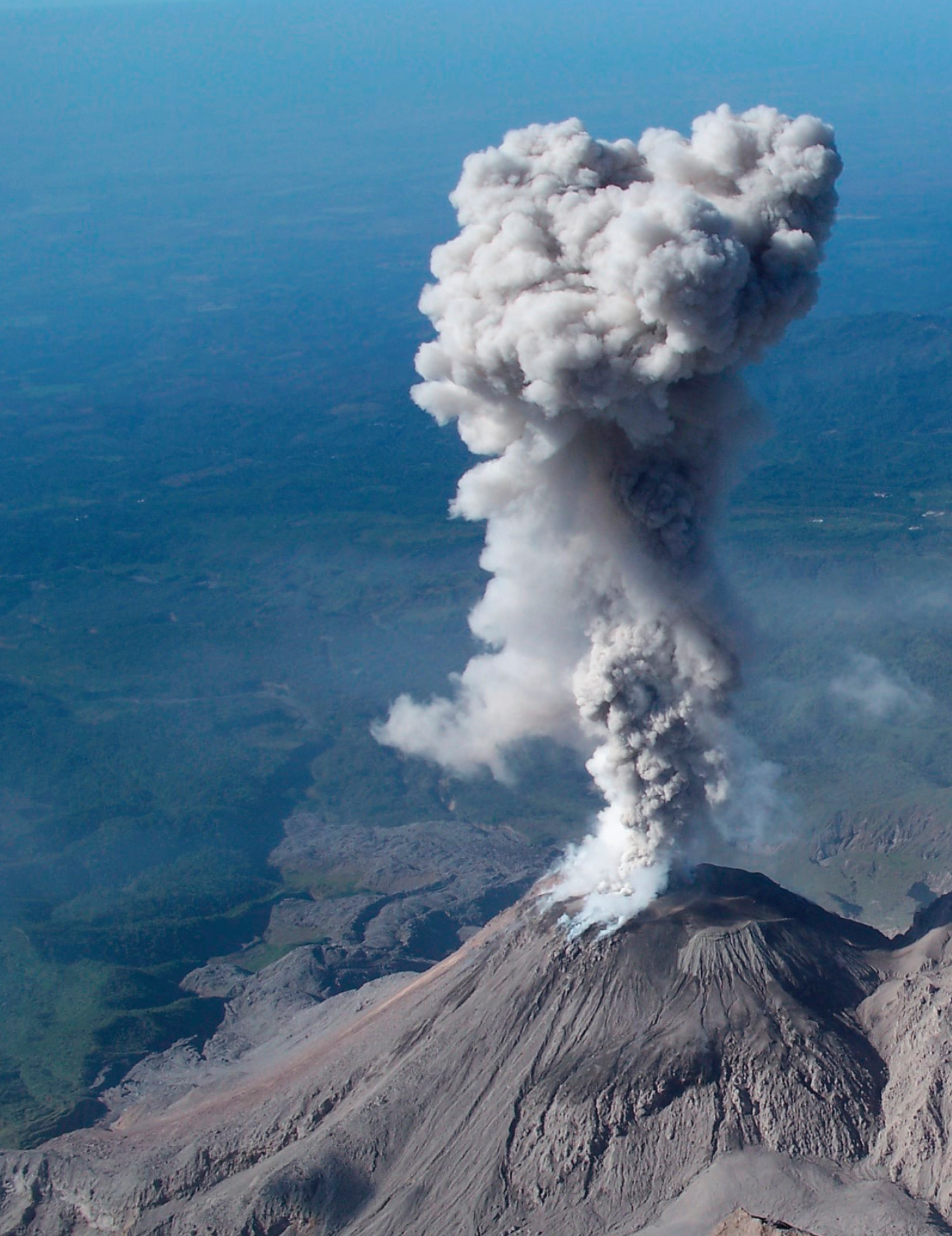 Next: 1 Introduction »
Volcanic Eruptions and Their Repose, Unrest, Precursors, and Timing Get This Book
× 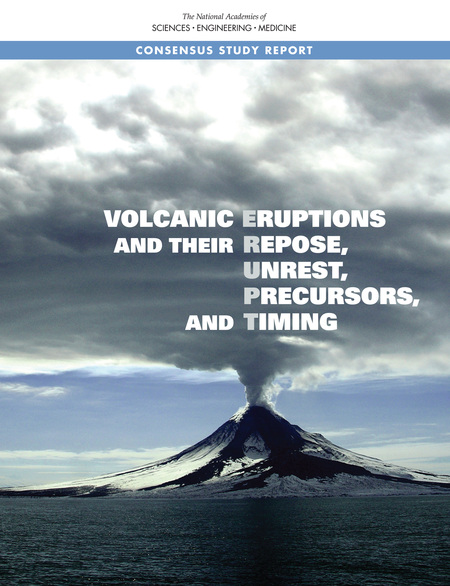 Volcanic eruptions are common, with more than 50 volcanic eruptions in the United States alone in the past 31 years. These eruptions can have devastating economic and social consequences, even at great distances from the volcano. Fortunately many eruptions are preceded by unrest that can be detected using ground, airborne, and spaceborne instruments. Data from these instruments, combined with basic understanding of how volcanoes work, form the basis for forecasting eruptions—where, when, how big, how long, and the consequences.

Accurate forecasts of the likelihood and magnitude of an eruption in a specified timeframe are rooted in a scientific understanding of the processes that govern the storage, ascent, and eruption of magma. Yet our understanding of volcanic systems is incomplete and biased by the limited number of volcanoes and eruption styles observed with advanced instrumentation. Volcanic Eruptions and Their Repose, Unrest, Precursors, and Timing identifies key science questions, research and observation priorities, and approaches for building a volcano science community capable of tackling them. This report presents goals for making major advances in volcano science.