Get This Book
Visit NAP.edu/10766 to get more information about this book, to buy it in print, or to download it as a free PDF.
« Previous: Front Matter
Page 1 Share Cite
Suggested Citation:"1 Introduction." National Academies of Sciences, Engineering, and Medicine. 2017. Securing Advanced Manufacturing in the United States: The Role of Manufacturing USA: Proceedings of a Workshop. Washington, DC: The National Academies Press. doi: 10.17226/24875.
×

To better understand the role and experiences of the Manufacturing USA institutes to date, a committee of the Innovation Policy Forum of the National Academies of Sciences, Engineering, and Medicine convened a workshop on May 23, 2017 drawing together institute directors and manufacturing policy experts along with leaders from industry, academia, and government. The presentations and discussions at this workshop addressed the role of the manufacturing institutes in increasing advanced manufacturing in the United States, examined selected foreign programs designed to support advanced manufacturing, and reviewed recent assessments of existing institutes. Presenters and participants also shared lessons learned and improvements and additional tasks that could be considered and adopted in the future by the institutes. (See Box 1-1, Project Statement of Task.)

The key cross-cutting themes of the workshop are highlighted in Chapter 2. This is followed in Chapter 3 by a detailed summary of the presentations. Finally, Chapter 4 outlines the key points made at the workshop. The appendixes provide the workshop agenda (Appendix A), biographies of speakers and planning committee members (Appendix B), and a list of workshop participants (Appendix C). The remainder of this introduction

1 Section 3 of the RAMI Act calls for the establishment of Network for Manufacturing Innovation. Access at https://www.govtrack.us/congress/bills/113/s1468/text.

To inform the work of the Innovation Policy Forum, an ad hoc planning committee under the oversight of the Board on Science, Technology, and Economic Policy (STEP) will organize a workshop to explore the role of the Manufacturing USA initiative, which is intended to create partnerships among industry, academia, and government that leverage existing resources and facilitate collaboration and co-investment to nurture manufacturing innovation, accelerate commercialization, and foster a skilled manufacturing workforce. The workshop discussion will examine external reviews of the Manufacturing USA Institutes; provide an in-depth discussion of a particular institute; address the contributions of the institutes to workforce and economic development; describe how other nations are supporting advanced manufacturing; and discuss potential U.S. priorities and policies for action. A proceedings of the presentations and discussions at the workshop will be prepared by a designated rapporteur in accordance with institutional guidelines.

presents background information on the history of the manufacturing institutes and on the federal role in this public–private partnership.

THE IMPETUS FOR MANUFACTURING USA

As Jeffrey Wilcox of Lockheed Martin noted in his keynote remarks at the workshop, the Manufacturing USA effort began with a 2011 report by the President’s Council of Advisors on Science and Technology (PCAST) entitled Ensuring American Leadership in Advanced Manufacturing. Drawing on analyses from industry and academia, that report notes that manufacturing has declined as a share of U.S. gross domestic product and employment. Moreover, the report points out that this decline extends to advanced technologies that are invented in the United States, but increasingly manufactured elsewhere. Recognizing that technology innovation is closely tied to manufacturing knowledge, the report concludes that the United States cannot remain the world’s engine of innovation absent a strong domestic advanced manufacturing sector.2

The PCAST report calls for an initiative that “would support innovation in advanced manufacturing through applied research programs for promising new technologies.”3 It envisions the advancement of this initiative through public–private partnerships formed around broadly applicable and precompetitive technologies. The report also calls for “the creation and

To develop actionable proposals from the general findings of this report, the Advanced Manufacturing Partnership (AMP) was created. This group of leading corporate leaders and university presidents—chaired by Andrew Liveris, chairman, president, and CEO of Dow Chemical, and Susan Hockfield, then president of the Massachusetts Institute of Technology—released its first set of operational recommendations in 2012 These included calls for a system of manufacturing institutes, after a nationwide outreach and engagement process.5 AMP was followed by AMP 2.0, a second project and report that included a major outreach and engagement effort to design policies to supplement and support the manufacturing institutes.6 Wilcox recalled that, “all that led to executive action, which created the first of the National Network of Manufacturing Institutes (NNMI), all of which was eventually codified and made statutory through bipartisan support for the 2014 RAMI Act.” The NNMI was rebranded as Manufacturing USA in 2016.

THE FEDERAL ROLE IN THE MANUFACTURING USA PARTNERSHIP

Bringing industry, academia, and government partners together within a growing network of advanced manufacturing institutes, Manufacturing USA is designed to increase U.S. manufacturing competitiveness. Each institute is an applied research center focusing on “early-phase” technology development (i.e., a “proof-of-concept” or “technology platform” development). It provides a venue where industry, academia, and government partners conduct research and development on applied manufacturing technologies of a focused nature. The benefits of this research accrue to the institute members, participants in related supply chains, and in the long run, to the nation as a whole.7 According to the Manufacturing.gov portal, the institutes seek to

catalyze cooperation between U.S. companies and researchers from universities and federal laboratories to rapidly develop ideas and inventions into products and processes that can be used by U.S. manufacturers. By involving small and large

U.S.-based companies, the Manufacturing USA institutes stimulate the formation of manufacturing ecosystems, building advanced capabilities into the domestic supply chain so that new technologies developed in the U.S. are manufactured here in the U.S. rather than in other countries. Each institute works to ensure that American workers are trained for the high-paying jobs needed to manufacture these new technologies.8

The institutes are structured as private–public partnerships funded in part through cooperative agreements between the sponsoring federal agency and a nonfederal entity in charge of operations. The federal funding level is typically $70–$110 million, matched or exceeded by funding from private industry and other nonfederal sources, with a minimum 1:1 cost share.9 Each institute is funded through a multiyear (minimum 5, maximum 7) cooperative agreement. As sponsoring agencies, the Department of Defense (DOD), the Department of Energy (DOE), and now the National Institute of Standards and Technology (NIST), through their separate appropriations, fund the institutes. The federal contribution decreases with time, and the institutes are expected to become self-sustaining over a period of 5 to 7 years.

As of May 2017, DOD, DOE, and NIST collectively had signed agreements to establish 14 manufacturing innovation institutes, located across the nation (see Figure 1-1). Four of these institutes were established prior to enactment of the RAMI Act. This legislation also established the Advanced Manufacturing National Program Office (AMNPO), an interagency team with core staff hosted at NIST, to coordinate federal activities in advanced manufacturing. The total federal commitment over the entire cooperative agreement period for the 14 institutes is approximately $1 billion, at present matched by more than $2 billion in nonfederal funding.10

9 In his presentation at the workshop, Mike Molnar reported that, in terms of financial leverage, FY 2016 matching was nearly 2 to 1, surpassing the minimum requirement. Of the $333,808,455 in total institute expenditures, 66 percent of institute funding came from nonfederal matching funds and 34 percent from non-program matching expenditures. This funding supports all aspects of institute operation, including technology advancement projects, education and workforce training efforts, and capital equipment.

Next: 2 Key Cross-Cutting Themes »
Securing Advanced Manufacturing in the United States: The Role of Manufacturing USA: Proceedings of a Workshop Get This Book
× 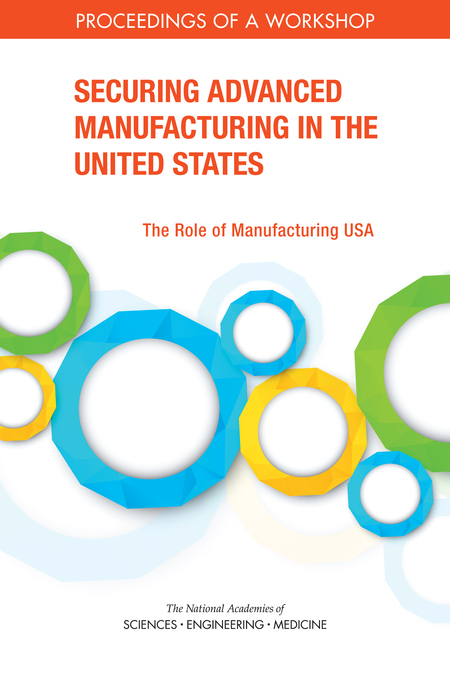 To better understand the role and experiences of the Manufacturing USA institutes to date, a committee of the Innovation Policy Forum of the National Academies of Sciences, Engineering, and Medicine convened a workshop on May 23, 2017 drawing together institute directors and manufacturing policy experts along with leaders from industry, academia, and government. Participants addressed the role of the manufacturing institutes in increasing advanced manufacturing in the United States, examined selected foreign programs designed to support advanced manufacturing, and reviewed recent assessments of existing institutes. This publication summarizes the presentations and discussions from the workshop.